JetsInsider.com > News > Blogs > Breece Hall is Becoming the Engine That Will Power the Jets Offense 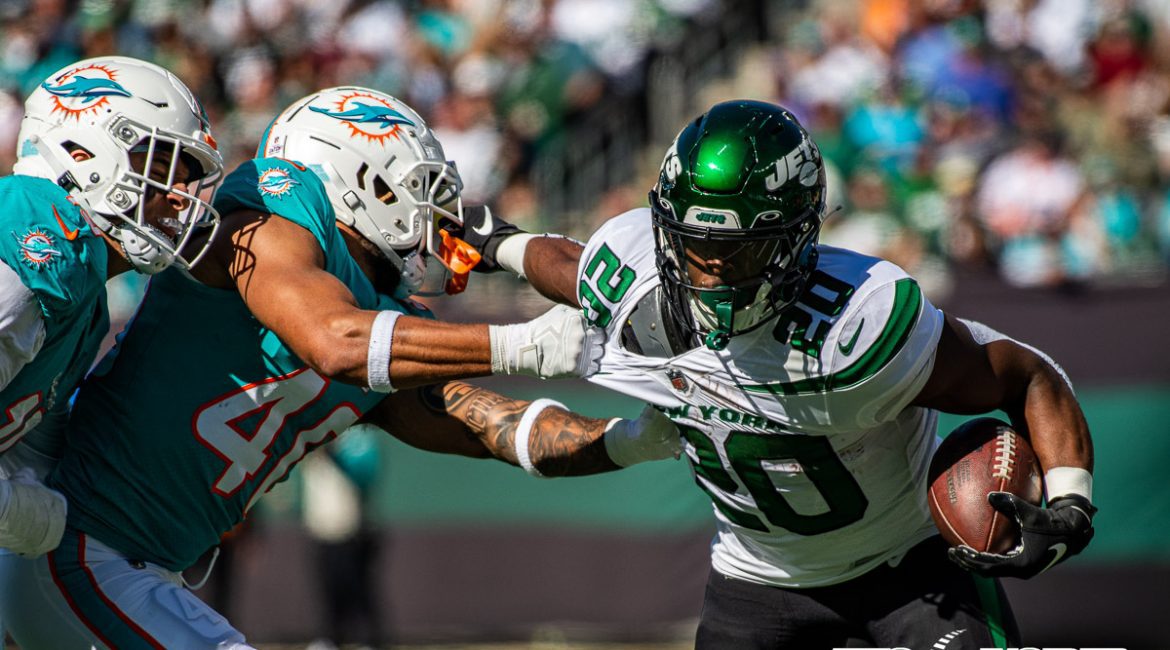 As the title suggests, my view is that Breece Hall is becoming the engine that will power the Jets offense, I say this looking back at last Sunday’s 40-17 victory over the Miami Dolphins, with some very key and impressive performers that helped the team win. Sauce Gardner had an interception and safety, continuing his impressive rookie season. Carl Lawson had seven quarterback pressures while also picking up a sack and a forced fumble. Quinnen Williams, John Franklin-Myers, and Bryce Huff all wreaked havoc in the backfield. Alijah Vera-Tucker and the offensive line held up nicely on the ground and in the passing game.

We previously mentioned how the Jets needed to build on the early wins and develop some consistency. But out of all the performers on both sides of the ball, arguably the best player on the field for the Jets was rookie running back Breece Hall. Hall had close to 200 yards from scrimmage, having a huge impact in both the running and passing games. On the ground, Hall had 18 carries for 97 yards and a touchdown, averaging 5.4 yards per carry In the air, Hall had two receptions for 100 yards, highlighted by his 79-yard-reception in which he evaded and ran through Dolphins defenders.

While Sunday’s performance was Hall’s best as a pro, it continued an impressive start to his rookie year. Hall is currently on pace for 1659 yards from scrimmage and 10 total touchdowns, making him one of, if not the favorite for the Offensive Rookie of the Year. In addition, Hall has 10 runs of 10-plus yards, which is the most among rookies according to PFF.

Beyond the numbers, Hall has shown the traits and ability that made the Jets value him so highly. In between the tackles, Hall has shown above-average burst, strength, and change of direction ability. His receiving ability, despite some drops, has been as advertised, as has his ability in pass protection.

Head Coach Robert Saleh spoke about Hall after the team’s victory on Sunday.

“He was awesome. He’s an explosive player. When we drafted him, it was because we needed a homerun hitter on this team, and he did that. He had a couple of home runs today.”

Saleh also said that Hall is “only going to get better” and spoke about how Hall and running back Michael Carter complement each other.

Hall spoke after Sunday’s game as well, saying that he ” had to learn to fight for that extra yard” in reference to getting stopped on the one-yard line multiple times. He also spoke about the 79-yard reception.

“Yeah, the coaches just always tell me to do the little things right and my natural ability will take over, and that stems back to college. Today I just ran the right route, sold it to the linebacker, got behind him, caught the ball, and just let my natural ability take over. “

Despite his relative inexperience, Breece Hall has already proved to be an invaluable part of the Jets’ offense. His versatility in both aspects of the game allows offensive coordinator Mike LaFleur to run the game plan through Hall. Having Hall be the engine of the Jets’ offense allows LaFleur to take pressure off of Zach Wilson to carry the team. This was evident against Miami, as Hall carrying the load on the ground and being a safety valve for Wilson allowed him to be comfortable and effective as a quarterback.

In theory, Hall’s continued involvement will allow the Jets’ offense to operate at its highest capacity. Hall continuing to do damage in both the running and passing games for the Jets will cause teams to sell out to stop him; once this happens, the play-action passing game with the team’s receivers should be able to open up. Furthermore, Zach Wilson will have more room to operate with his other weapons, allowing players like Garrett Wilson and Elijah Moore to be more involved.

Hall has displayed everything that is necessary to become a star running back in the NFL, something the Jets have lacked for a very long time. He has quickly gone from a time-share in the backfield to take over most of the work and is rewarding the Jets for making this decision. Hall is becoming the engine that powers the Jets’ offense, and if he can continue his early-season performance over the entire year, the Jets will be in a great position as an offense and as a team moving forward.