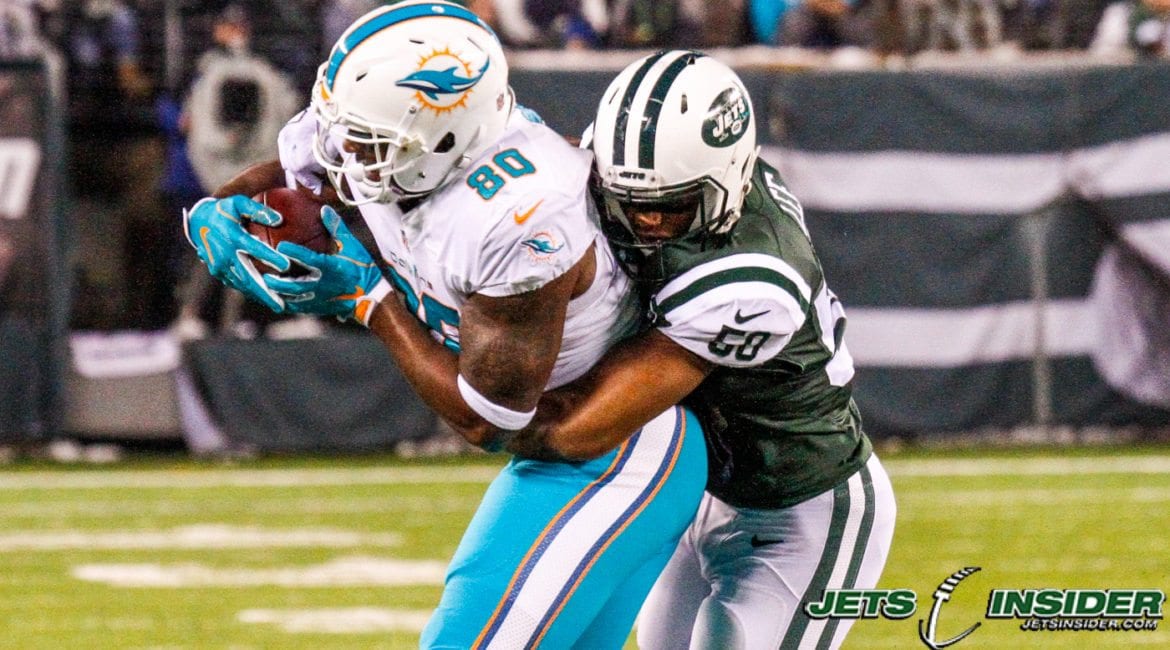 Florham Park, NJ – The New York Jets defense is starting to play like fans expected them to all season.

If the defense came up in conversation, most praise was reserved for the rookie safety duo of Marcus Maye and Jamal Adams. They deserve it, too. Adams and Maye have been vocal leaders on the field and making plays. As for the linebackers and defensive linemen, it’s completely different. The linemen weren’t getting pressure on opposing quarterbacks and the linebackers weren’t containing opposing running backs.

In recent weeks, the play of the defense changed dramatically. Jordan Jenkins received his first AFC Player of the Week honor following the Jets’ Thursday Night matchup against the Buffalo Bills. Jenkins became the first Jets linebacker to win the honor since David Harris won it in 2011. He had a total of two tackles for loss, two sacks, and a forced fumble. While it wasn’t the most tackles he had in a game this season (he had five Week 2 against the Oakland Raiders), the sacks and fumble were the first of the season for him.

Darron Lee started the turnaround a little earlier against the Miami Dolphins than Jenkins did. In Week 7, Lee recorded 11 tackles and a forced fumble. The following week against the Atlanta Falcons, Lee included a pass deflection to his stat line and a sack Week 9 against the Bills. Lee has improved a lot since he was written off at the beginning of the season for his inability to play inside linebacker. Now the question becomes: can Lee and Jenkins play this well on a consistent basis?

The defensive line has also turned a corner in the last few weeks. Even though Muhammad Wilkerson didn’t get a sack against the Miami Dolphins Week 7, he did intercept a tipped pass and set the Jets up for a score before halftime. It was his first interception since 2013 and the first since Kony Ealy picked off Blake Bortles Week 4 against the Jacksonville Jaguars. The play showed Wilkerson is capable of putting his hands up and making it hard for quarterbacks to throw accurate passes.

However, the defensive lineman’s job is to get to the quarterback, which the Jets d-line has struggled to do this season. Defensive coordinator Kacy Rodgers has always said that sacks come in bunches.

“That’s the way it happens sometimes,” he said. “There’s a lot of times that you have a lot of good rushes and there’s nothing to show for it and all of a sudden, bam.

However, it’s unusual for a defensive line to go eight weeks without a sack. Against the Bills, that all changed. It wasn’t just one defensive lineman sacking the quarterback, it was all the defensive linemen. Wilkerson, Ealy, Leonard Williams, and Steve McLendon all got a sack last Thursday. This proves that the Jets are capable of getting to the quarterback and sacking him or, at the very least, putting pressure on him and making him force bad throws.

The defense is starting to play like Jets fans expect, and they’re doing it at the right time. With the Jets one win under .500, a win against the Tampa Bay Buccaneers would boost the confidence of the team heading into the bye week. While the recent suspension of Mike Evans and benching of Jameis Winston may look like an easy win for New York, Rodgers isn’t letting his guard down.

“Anytime you lose a Pro Bowl caliber player from another team’s perspective, you like it,” Rodgers said. “But they’re still a talented group of guys. They still have DeSean Jackson, the two tight ends, the backs, so they’re still very formidable.”

The Morning After Report Final Exam Edition,Espns Bruschi Retracts Sanchez Comments,The Nfl Draft A Time Of Hope And Optimisim Even For The Jets,Jets Aim To Take Control Of The Division,24 Hour Rule In Progress,Choose Your Own Adventure 2010 Jets Style,Report Quincy Enunwa Has A High Ankle Sprain,Escape From Cleveland Jets Outlast Browns In 26 20 Ot Victory,402 2,Insider Thursday Team Report 3