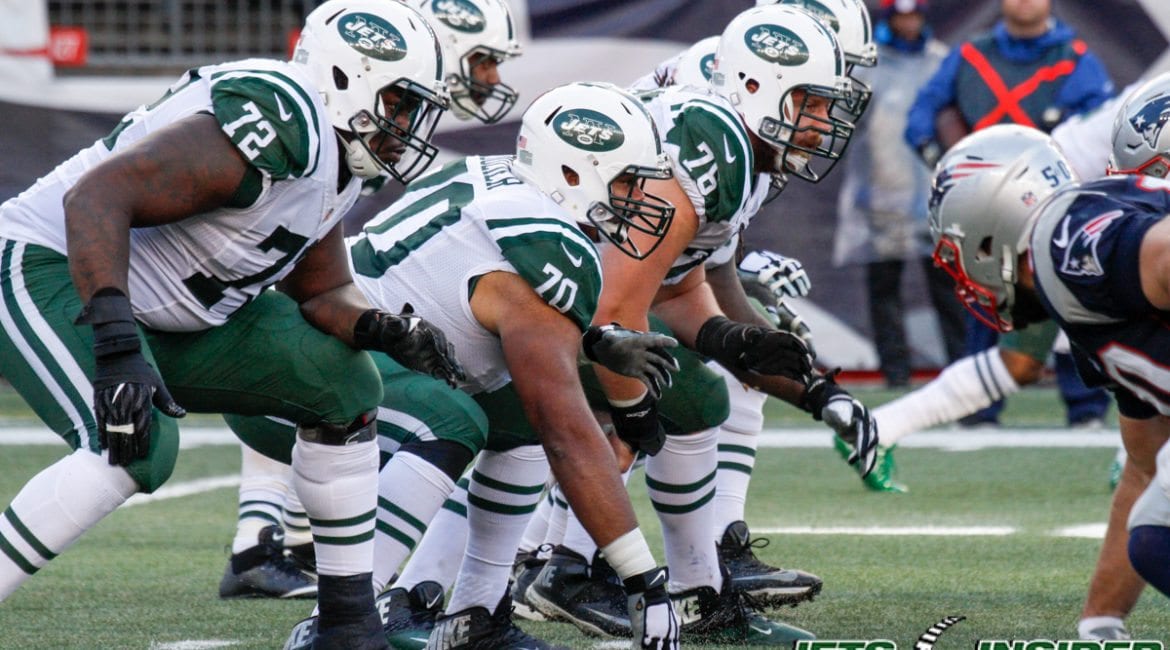 The Jets offensive line was a weak spot for the Jets last year, and I’m personally still haunted by this play from 2016, which can only be described as “how not to play offensive line”. The Jets offensive line is ranked 31st by Pro Football Focus coming into the 2018 season, and for good reason. The Jets have taken only 3 offensive linemen in their last five drafts; Brandon Shell, Dakota Dozier, and Jarvis Harrison. Shell is slated to start at right tackle after a somewhat shaky but promising first year, Dakota Dozier is a decent backup guard, and Jarvis Harrison plays in Canada. The team lost perennial all-stars and ring of honor players Nick Mangold and D’Brickashaw Ferguson before last season and have done very little to replace them. It’s something the Jets will need to address in the coming years if they want to see Sam Darnold stay healthy. Fortunately, the Jets picked up some intriguing fringe players who could make an impact in coming years, for now this is what the Jets depth chart looks like.

Left Tackle: Kelvin Beachum
Beachum, formerly of the Steelers and Jaguars, was a big step up from Ryan Clady in 2017. He had a decent year while going against some of the league’s best pass-rushers in Khalil Mack, Cameron Jordan, Von Miller, Joey Bosa and Melvin Ingram. Now 29, the Jets are hoping he can regain his form from when he was a member of the Steelers as one of the best pass-blockers in the NFL. That may be a pipe dream but look for Beachum to build on a good 2017.

Left Guard: James Carpenter
The interior of the Jets line is where they were most vulnerable last year, and James Carpenter did not help. He allowed 10 quarterback hits and was a liability in the run game, leading the Jets to run right or bounce it outside. Carpenter, a former first-round pick, cannot lose another step with Dozier and some undrafted guys also trying to get on the field.

Center: Spencer Long
Spencer Long will be an upgrade at center and will enable the Jets to run up the middle more effectively. According to FootballOutsiders, the Jets ranked 31st in power success, which tracks the success rate of runs on third or fourth down with less than two yards to go, or within two yards of the end zone. These are mostly runs between the tackles, and as such it is a good measure of a team’s interior line. The Jets had a power success rate of 48%, and were one of two teams to not finish above 50%, the other being the Detroit Lions. Although Long lost his starting job to sixth-round pick Chase Roullier, he will be better than Wesley Johnson. Long is an average center in the NFL, but that will be a marked improvement. Long will have to beat out fellow newcomer Travis Swanson, but Long, drafted two spots after Swanson in 2014, should win out if he can stay healthy.

Right Guard: Brian Winters
You know what you have with Brian Winters. He’s the best player on the Jets line, and is a mean, old-school, S.O.B. He tore his abdominal muscles in week 2 and played until he was put on IR on December 20th. That is a feat in itself. He did not have the best season, but any movement at all with that injury is extremely painful, and he played alongside the turnstile starting center named Wesley Johnson. Winters plays with a Conrad Dobler-esque edge to his game, and seems to genuinely hate his opponent, whether or not they are wearing green and white (He got into a minor scuffle with rookie defensive lineman Folorunso Fatukasi during minicamp and fought Sheldon Richardson in 2014). Winters is a master of the art form of knowing how to hold and not get caught, which can really get into a defensive lineman’s head.

Right Tackle: Brandon Shell
Shell, the Jets fifth-round pick in 2016, started 12 games in 2017. He missed time for shoulder and neck injuries as well as a concussion at the end of the season but was vital to the Jets run game last year. The Jets ran a higher percentage of their run plays through the right tackle than anyone in the league at 18% of their runs, and Shell did a serviceable job while also having a heavily injured Winters as a guard. Shell should improve with a year under his belt and the healthy return of Winters.

Backup Tackle: Ben Ijalana
The New Jersey native born in Nigeria has been a solid backup for the Jets for five years. Although he didn’t get a start last year, he started in 13 games in 2016, alternating between the two tackle positions. He allowed eight sacks. Ijalana was once pegged as a first-round talent before being scooped up by the Colts in the second-round who traded up to get him. After tearing his ACL in two consecutive seasons, he was grabbed off of waivers by the Jets in 2013. He’s no guarantee to make the squad, but the Jets did give him a 2.5 million dollar contract this year.

Backup Tackle: Brent Qvale
Qvale was picked up by the Jets in 2014 as an undrafted free agent. He started in 5 games in 2016, and 6 in 2017. He has played in 44 games with many appearances as the sixth lineman on goal-line run plays. He’s a big body that’s hard to move and is a capable run blocker. He is extremely intelligent and earned his master’s degree in applied science from Nebraska in his time there.

Backup Guard: Dakota Dozier
Dozier, the Jets fourth-round pick in 2014, started three games in the place of the injured Winters and looked like he might be ready to be a starter. If he has a solid preseason, he may take the starting job from Carpenter, who needs to be better than he was last year to start all season. He attended Furman, where he started all four years and was twice named an FCS All-American. Carpenter only has one year left on his contract, so the Jets will be considering him for guard of the future, regardless of if he takes the starting job.

Backup Center: Travis Swanson
Swanson was the Detroit Lions version of Wesley Johnson last year. He and Johnson were essentially swapped for one another as the fan bases of each franchise were probably sick of hearing their names. Swanson has 42 career starts under his belt and is a fantastic option for depth. He’ll have to beat out Jonotthan Harrison for the role of backup center. He allowed only one sack last year, and the Jets didn’t give Harrison the center job, even with Wesley Johnson.

Reserve Center: Jonotthan Harrison
Harrison went undrafted in 2014 and then signed with the Colts, who started him 10 times his rookie season. He started nine the next season, and in his final season with the Colts he started four games. Last year he started in one game with the Jets. In March, the Jets signed him to a veteran’s minimum one-year contract.

Reserve Tackle: Dakoda Shepley
Dakoda Shepley was drafted fifth overall… in the CFL. The raw University of British Columbia product impressed scouts at Eastern Michigan’s pro-day, showing off his athleticism by finishing with numbers that would have been in the top 10 at the combine in the 40-yard dash, shuttle-run, vertical, broad-jump, and bench-press for offensive lineman. He clearly has the athleticism to be a top-tier talent in the NFL. This was a great find by general manager Mike Maccagnan, who also drafted fellow Canadian Nathan Shepherd in the third-round.

Reserve Guard: Ben Braden
As the sixth largest man in the 2017 combine, Braden ran the sixth fastest 40-time at 5.04 seconds. At 6’6″ he also has the size to play tackle. Braden was stashed on the Jets practice squad last year and has two more years left on his contract. Braden is going to have plenty of competition for the practice squad this year, as Austin Golson is a similar player that can also play center, but Braden has the edge in athleticism.

Reserve Tackle: Antonio Garcia
Antonio Garcia was a third-round pick by the Patriots in 2017. After leaving a training camp practice early, it was discovered he had blood clots in his lungs. He did not play in even one preseason game for the Patriots, who released him in May after he was cleared to play in April. The 6’7″ Troy product did not allow a sack in his senior season, and if health is not an issue, he could be pushing not only for a roster spot but also playing time. He is eligible for the practice squad.

Reserve Lineman: Austin Golson
There’s always a spot in the NFL for someone that can do the job of three players. Golson is an extremely versatile lineman, having started at center, guard, and tackle in his time at Auburn. What he lacks in athleticism, he makes up for in leadership and toughness. One day he’ll be quite an asset to an NFL roster due to his extreme versatility, but he needs to shed some bad weight. Look for Golson to make the practice squad.

Reserve Tackle: Darius James
Another Auburn product that lacks athleticism, he’s a big body at 320 pounds with good technique but is slow to get to the second-level on run plays. He’s extremely powerful, but it does not look he has much room to grow as a player.