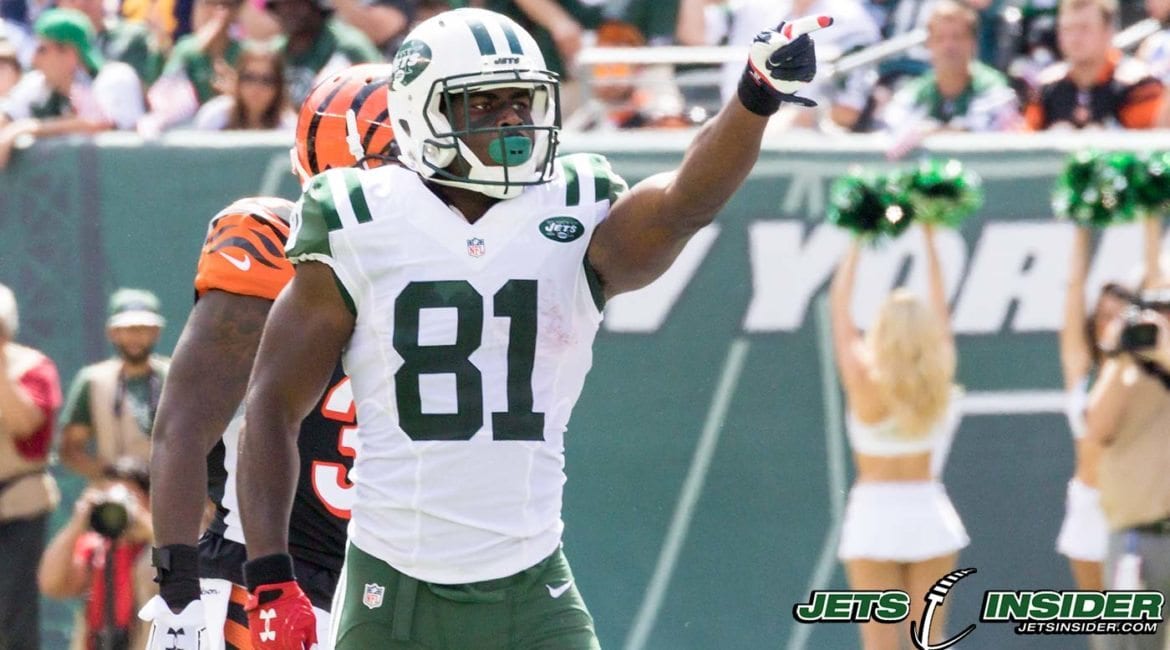 The large number of receivers being brought into camp is in part to shore up the shoddy return game the Jets have had since the loss of Brad Smith and Leon Washington and to help an offense that ranked just 24th in passing yards despite good years from Jermaine Kearse and Robby Anderson. The quarterback situation has taken a positive turn this offseason, and whether it be Bridgewater or Darnold, the receiving core should be excited. But so should the quarterbacks. As noted by ESPN Stats and Information, the Jets are the only team to have four receivers with 800 yard seasons. Without further ado, here are the receivers the Jets are bringing to training camp, from most likely to make the roster to least.

The undrafted kid from New Jersey is starting to feel more like his undrafted Jerseyite predecessor, Wayne Chrebet. Given the speedster has a couple inches on Wayne Chrebet (Anderson is 6’3, Chrebet is 5’10), their production looks similar so far. But Anderson is better. Anderson finished his 2017 season with 941 yards, although with only had 120 yards in his final four games after Josh McCown broke his hand. If he plays all 16 games, which he thinks he will, he could be a top 10 receiver this year, and will finish 2018 with his first 1,000 yard season, and should hit 1,200 yards. Chemistry with the new quarterback will not be an issue for Anderson, who uses his 4.41 speed to get open and his height to go up and make the catch, like a slimmer, speedier Marvin Jones. Robby Anderson is our WR1 and will line up outside.

Pryor injured his ankle in week two of the 2017 season and required season-ending ankle surgery in November after attempting to play for nine games. He had only 220 yards and one touchdown. Pryor needed a second operation on his ankle in the spring and missed minicamp and OTA’s. It’s unsure whether he will be ready for training camp. Pryor had an 1,000 yard season in 2016 while receiving a majority of his passes from Cody Kessler in Cleveland. If he is healthy for the start of training camp, which according to Pryor he is, he should line up opposite Anderson as our WR2, and will have an 800 yard season. Pryor will be invaluable in the red zone, being 6’4 and having a similar build to Brandon Marshall.

Enunwa sat out the entire 2017 season with bulging discs in his neck but will be ready for the start of training camp. In 2016, while filling in for the injured Eric Decker, he had an 850 yard season. Enunwa will start in the slot over Kearse, where he has been an asset to the Jets with his tight-end like blocking abilities, his route-running, and consistent hands. Because of the mismatch he creates with his blocking, he will see the field plenty in 2018 and should finish north of 700 yards.

Kearse had a career-best 810 yard season in 2017, but the only wide receiver other than Anderson and Kearse that finished with more than 100 yards was Jeremy Kerley, who finished with 217 yards. Kearse will see a diminished role in 2018 but should still get 500 yards. He doesn’t bring the mismatch that Enunwa does, and Pryor is simply a better outside target when healthy. With the tight end position is the least impressive part of the roster and the Jets having four very talented NFL proven receivers, the Jets will employ plenty of four wide receiver sets in 2018, allowing Kearse to see the field enough to get 500 yards as the fourth option.

Hansen, the fourth-round pick from 2017, looks more ready to make an impact than he did a year ago. Last year, he had just nine receptions for 94 yards. If the Jets do end up employing more four wide receiver sets, Hansen will get some playing time to give the other receivers a breather. Hansen will probably get about 250 yards and be the first option in their four receiver sets if an injury were to happen.

Roberts has been an impressive return man throughout his career. Last year, three of his nine kick returns went for more than 20 yards. He will make the roster and most of his contributions will be on special teams. He will have to beat out Lucky Whitehead, Jonah Trinnaman, Tre McBride, and rookie running back Trenton Cannon. Roberts is 30, but of the possible return men, he is the most polished receiver gaining just shy of 3,000 yards through the air. On his career he averages 23.4 yards per kick return and 8.1 yards per punt return.

Peake was the fourth wide receiver on the depth-chart going into 2017. He suffered an ankle injury early on last season and was put on IR. He has 189 yards on 20 receptions in two healthy years as a depth receiver. He will be competing with Ardarius Stewart, Charles Johnson, Devin Smith, and Tre McBride for the final roster spot. He gets the edge due to his size and speed.

Whitehead was a standout return man for the Cowboys until his release based on stealing $25 worth of stuff from a Wawa in a case that was later determined to be mistaken identity. He dropped three fumbles with the Cowboys in 2016 and sat out most of 2017 with a broken foot before being resigned by the Jets practice squad in November. He will lose the return man position to either Trenton Cannon or Andre Roberts. On his career, he averages 25.6 yards per kick return and 6.9 yards on the punt return.

Stewart, the Alabama product, had a disappointing rookie season. He had just six receptions for 82 yards, and with a stacked roster above him it does not look like he will make the team. He will almost certainly get another chance elsewhere, but without showing what he’s got on a lesser 2017 roster, he might have lost his shot in the Meadowlands.

Smith was once a second-round draft pick with a lot of promise. If he can show his speed is still there and impress in training camp, he might earn a roster spot. He has not shown that he can handle the wear and tear of the NFL, suffering two torn ACLs in three seasons. That will be the deciding factor in his release.

Charles Johnson did a decent season for the Minnesota Vikings in 2014 after replacing Cordarrelle Patterson, going for almost 500 yards, and was eventually given the starting job opposite Stefon Diggs in 2016. He promptly lost the starting role four weeks into 2016 after catching only five passes for 90 yards. He sat out 2017 with a knee injury and looks to be a training camp body.

McBride was a seventh-round pick in 2015 by the Titans. He was an effective kick returner his first year there, and then lost the role when the Titans resigned Marc Mariani. The Bears picked him up in 2017 and he made 8 catches for 144 yards on a much more depleted receiving core than the Jets have. He does not have a role with the Jets in 2018.

The 5’9 receiver was a very effective punt returner for his junior college before transferring to BYU and taking a larger role in the offense. He still returned kicks, just not punts. His only shot of making the roster is in the return game, and he’s got competition from running back Trenton Cannon, and receivers Andre Roberts, Tre Mcbride, and Lucky Whitehead. It would be quite a shock to see Trinnaman in green and white.