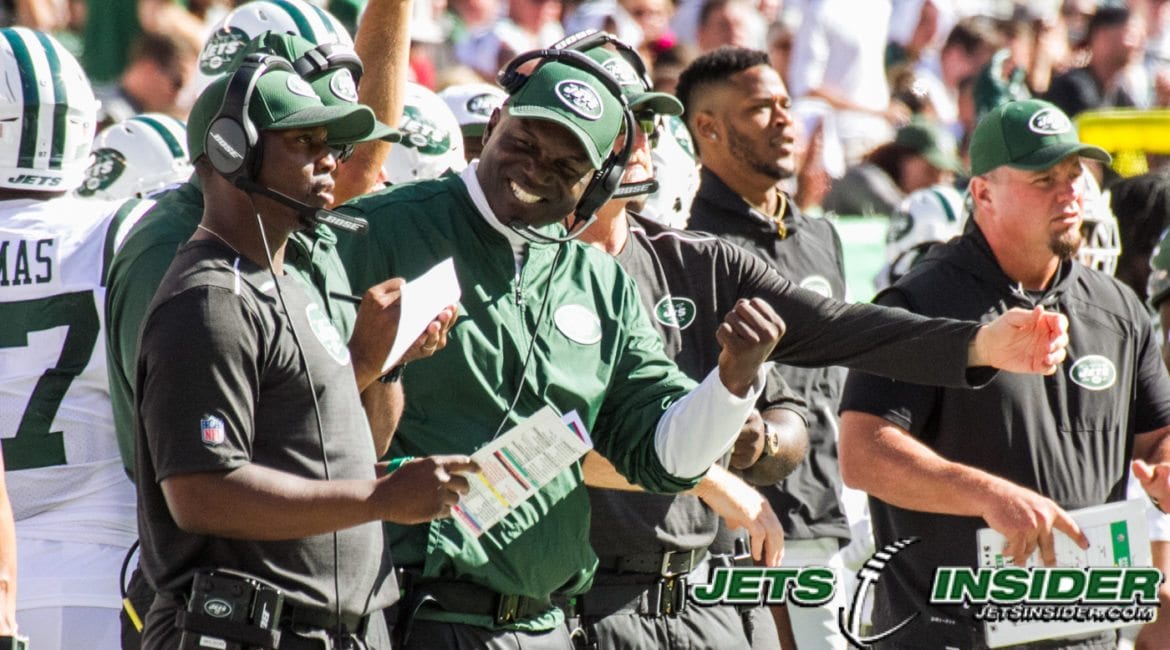 Florham Park, NJ – Now that you’ve had the chance to select your favorite #JetsDanceToAnything video and had the chance to enjoy your football Sunday without stress, it’s time to focus on what the Jets have their eyes on – heading into the BYE week at .500.

New York sits at 4-5, 10th place in the AFC playoff picture, 1.5 games out of the final Wild Card spot. Who could have predicted that? In that same breath, who could have predicted the Jets’ opponent – the Tampa Bay Buccaneers – to be 2-6 after narrowly missing the postseason at 9-7 in 2016? It’s been a struggle for Tampa Bay this season. They sustained blows to the chest when their franchise quarterback – Jameis Winston – went down with a shoulder injury, their star wide receiver – Mike Evans – was suspended, and haven’t been able to establish a running game with two-time Pro Bowl running back Doug Martin in the backfield.

This is a winnable game. But, it’ll take another 60 minute effort.

Here’s what you should watch for:

Tampa Timeshare: It’ll be a vacation back to the place where quarterback Josh McCown spent one season and tight end Austin Seferian-Jenkins  spent parts of three. With the Buccaneers, McCown started 11 games and failed to find success. Seferian-Jenkins was meant to be their future tight end and game-breaking talent. Both find themselves in green and white on Sunday at the stadium they once called home. McCown and Seferian-Jenkins have had a connection all season, despite a lack of production from the latter in recent weeks. They will need to team up more than a few times on Sunday to truly pick apart a beleaguered Tampa Bay defense that ranks 25th in the league in points allowed per game. The weather shouldn’t be an issue as it is expected to be 82 degrees and partly cloudy. No excuses for McCown and Seferian-Jenkins who have braved the field and elements once or twice before.

Born to Run: Like Bruce Springsteen’s classic hit, the Jets were born to run – especially in Sunday’s tilt. Tampa Bay has allowed nearly 116 rushing yards per game in 2017. Expect a heavy dosage of Bilal Powell and Elijah McGuire in Florida, especially with veteran Matt Forte ruled out of the contest due to a swollen knee. Last Thursday against Buffalo, the Jets called 41 rushing plays and compiled 194 yards on the ground with three scores. Powell had 74 yards on nine carries while bursting downfield for a 51-yard run. In order to keep the offense on the field and defense rested, Powell and McGuire need to find their stride early against the Buccaneers front line. Fun Fact: the Jets are 3-1 this season when they rush for over 100 yards.

TEst Ahead: The young O.J. Howard is having an excellent rookie season with Tampa Bay. He has 14 catches for 227 yards and three touchdowns. Howard has been targeted 22 times. Expect that number to jump higher with Ryan Fitzpatrick under center now that the Bucs’ top reciever – Evans – is suspended.

“He’s a phenomenal player, man,” Adams told NJ.com. “He has the potential to be one of the top tight ends in the league. We’ve got to keep our eyes on him and hopefully stop him this week.”

Turn FitzMagic into FitzTragic: We all know the polarizing figure that is Ryan Fitzpatrick. Unbelievable describes him well. He can either be unbelievably good or unbelievably bad. Typically, it’s the latter. The point is, Fitzpatrick will be motivated to play his former team on Sunday. With a chip on his shoulder, expect Fitzpatrick to take an extra few chances downfield. That can lead to turnovers and we all know how much Fitzpatrick can do that (17 interceptions in 14 games in 2016). This means the Jets pass rush will need another stellar game, like they had against Buffalo, and flush Fitzpatrick out of the pocket. When he is on the run and has a linebacker as a spy, he will make bad throws. Jamal Adams, Marcus Maye, Buster Skrine and Darryl Roberts will need to bring their ‘A’ game as well as sticky gloves to catch those potential interceptions.

I believe the Jets offense will have a collective effort to handle the Bucs’ defense on Sunday but these two players on the defensive side of the ball need to show up. Skrine has struggled this season, especially being flagged numerous times. With Evans out, the Bucs have DeSean Jackson, Cameron Brate and Adam Humphries lined up on the outside. If McLendon and the Jets stuff Martin and the run game, New York will force Fitzpatrick and Co. to have a long game against Skrine and the young safeties.

This is a game the Jets need to have if they want to be taken seriously. At 2-6, the Bucs have not much more to play for besides themselves. New York needs to maintain their humility and confidence while taking the necessary steps to grab their second road win of the season. Don’t underestimate the Buccaneers, even with Ryan Fitzpatrick at quarterback. Jets will be up 20-16 in the fourth quarter when Fitzpatrick drops back and throws a pick-6 to Jamal Adams. New York should be 5-5 heading into the BYE week.