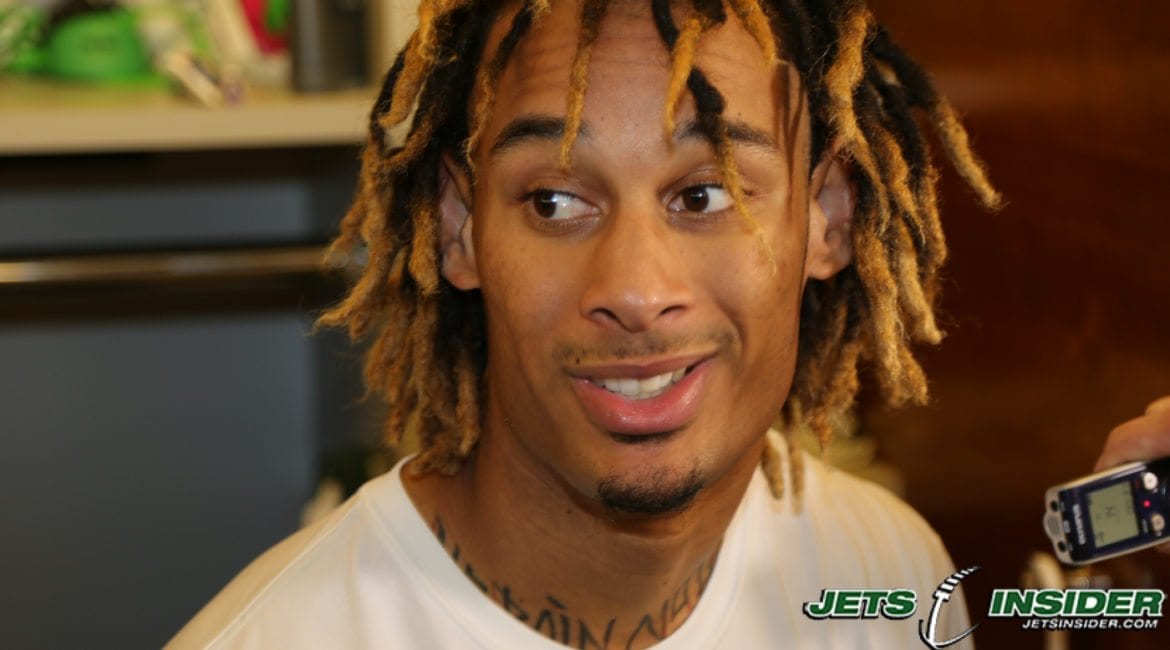 Florham Park, NJ – While he may not be the Pro-Bowl caliber receiver he campaigned as Sunday against the Carolina Panthers, Robby Anderson has proven to be a consistent top target for the New York Jets this season.

The stats are hard to argue. Anderson leads the Jets in receiving yards with 714 and in touchdowns with seven, surpassing the numbers he put up last season. He is tied with Austin Seferian-Jenkins for second in receptions with 41 behind Jermaine Kearse’s 42. In addition, Anderson extended his streak of games with a touchdown reception to five, the longest active streak in the NFL. Anderson, who went undrafted in 2016, is tallying stats scouts would expect from a first-round receiver. It’s a question that baffles offensive coordinator John Morton to this day.

“Every year you get these free agent type of guys and they get in a certain system and they have success – I think he can have success in any offense but I’m glad we have him,” he said. “Robby has an unbelievable canny about him tracking the ball at another gear down the field. I haven’t been around a lot of players that can track a ball like him. He works hard every single day. Route running, it takes time.”

Route running and discipline on the field are areas that Anderson still needs work in. Jets fans got a first look into his composure in the 31-28 loss to the Miami Dolphins Week 7. Out of frustration, Anderson took off his helmet and threw it to the ground. As a result, the referees assessed a unsportsmanlike conduct penalty that backed up the Jets from their 16 to their 8. Fast forward to last Sunday against Carolina, Anderson celebrated his second touchdown reception of the game by lying down in the end zone with the football under his helmet, as though he was sleeping in a hammock. Following the celebration, He went over to a camera on the sideline and stated, “How about you vote for me for the Pro Bowl, man, please?” The campaign for Anderson in the Pro Bowl drew the attention of head coach Todd Bowles, and he sat down with Anderson following the game.

“Yes, we had a discussion. We’re on the same page,” Bowles said. “I have discussions with most of my players all of the time. It’s not just Robby, so it’s normal conversation.”

There’s nothing wrong with a little passion on the field, it’s how players play the game. Outspoken players like Randy Moss, Chad Ochocinco, and Terrell Owens had great careers and never held back on their thoughts. Even receivers like Jerry Rice and Michael Irvin had their moments of outspoken attitude. The problem is letting that passion get the best of them and act before they think. Anderson’s career in New York got off to a great start and can continue to grow, but being discipline on the field and improving his route running must be his focus moving forward. He’s got the stats and the work ethic to achieve it.