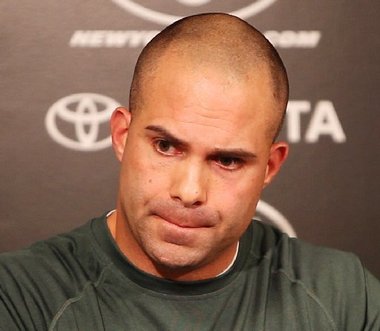 After speaking with Sal, he decided that it is best for him to tender his resignation at this time,” Tannenbaum said. “We appreciate all of Sal’s contributions during his tenure with the team. He played an invaluable role in our success and established what we feel is one of the better strength and conditioning programs in the NFL.”

You may remember that Alosi was the ring leader in a certain mid-game mishap that was later dubbed “Trip Gate”. In a Week 14 home game against the Miami Dolphins Alosi instructed players on the sideline line up side-by-side along the sideline as the Jets prepared to receive a punt. The “wall” that is created by the players forces the opposing team’s gunner to have a tighter route to the returner or force him out of bounds. In the case of Dolphins’ gunner, Nick Collins, he did neither. As Collins passed Alosi’s “wall” of players, Alosi stuck out his knee and purposely tripped Collins.

The play went unseen by the referees, but the cameras caught it as the story became blazoned on the internet before the game even ended. The backlash that ensued afterward was especially harsh, considering the Jets poor play in a 10-6 loss and their off the recent off-the-field mishaps.

Alosi was subsequently suspended for the remainder of the season, playoffs included, and was fined $25,000 for the action. Speculation arose when media members began questioning that a strength and conditioning coach, one of the lower coaching positions on the team, acted unilaterally from the team in setting up this illegal “wall”.

“I’m thankful to have been a part of the New York Jets,” Alosi said. “I am especially grateful to Mr. Johnson, Mike Tannenbaum and Rex Ryan for allowing me the opportunity to be a head strength and conditioning coach in this league. I have many fond memories, including earning my first NFL job in 2002. After the events that have transpired, I feel it’s best for my family and me to look for a fresh start. I wish nothing but the best for the entire organization.”