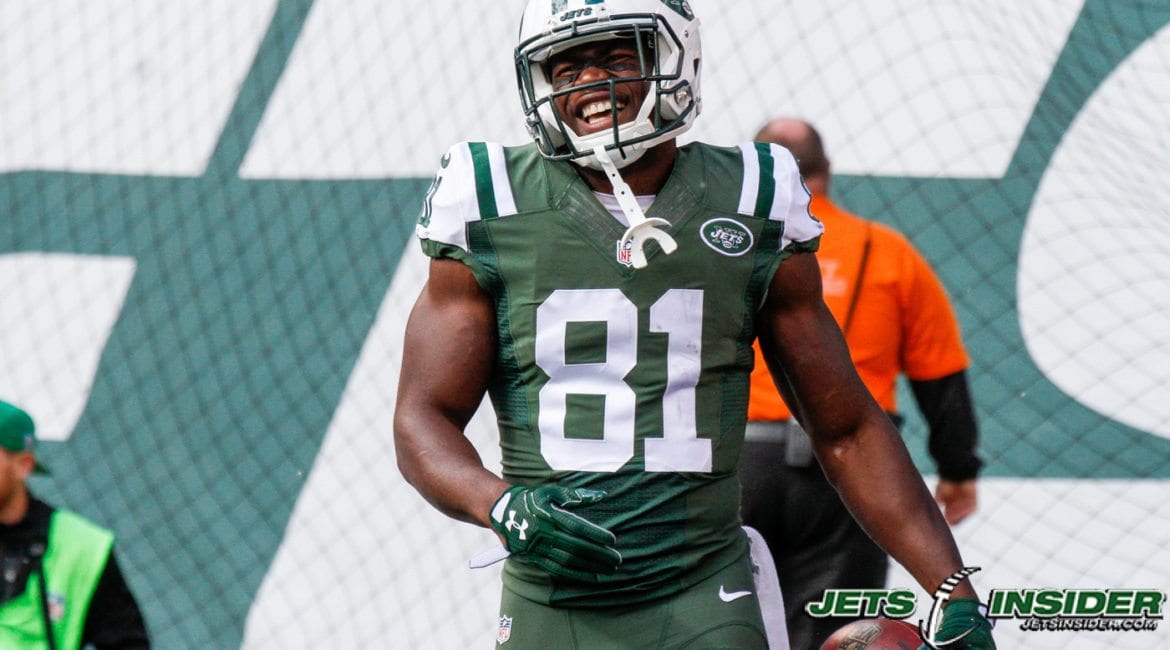 Florham Park, NJ – For the fourth day of training camp the Jets put on the pads for the second straight time and it’s a good thing the players have an off day because they earned that off day after today’s practice. The intensity always kicks up a notch when the pads came on, but today they ramped up the intensity even more than yesterday as they went full contact which made for a wildly entertaining practice so let’s get to the observations.

1) Pads on = hard, clean hits – It happens every year, the pads come on and the players get excited to start hitting again and us reporters, after being lulled to sleep from watching non-contact practices, start to feel actual football again. The fact that there was so much hard, clean hits dished out isn’t newsworthy in and of itself, but who was doing most of the hitting was.

Second-round draft pick Marcus Maye was flying around the field and unleashing brutal hits to anyone who dared to enter his path. On one swing pass to the outside the receiver caught the ball on the sideline, tried to turn upfield but before he could complete said turn he found himself three yards out of bounds with Maye on top of him. It was another reminder that while Jamal Adams has been receiving the bulk of attention, and for good reason, we should not forget about Maye because he has been awfully impressive as well.

Another big hitter on the day might surprise you, Demario Davis. Davis has always been talented and fast, but he truly does seem like a different person and a different player. He’s playing with more confidence and you can see that on the field in everything he does, but yesterday he destroyed tight end Eric Tomlinson and today he delivered multiple punishing hits. I’m not suggesting we get carried away and announcing he’s well improved since his last time with a Jet, we’ll need to see that in actual games first, but I’m saying there’s a chance.

2) Friendly banter – Since mini-camp we’ve heard players talk about the chemistry in the locker room and how much it’s improved, but players tend to say stuff like that a lot so I was hesitant to believe it. I’m not hesitant anymore and the proof is in the trash-talk. The players are much more vocal and the are constantly running their mouths to each other, but in friendly ways. We aren’t allowed to report what is said on the field, but everything from the words to the tone sounds exactly like how really good friends trash-talk each other. Players will run their mouths, challenge each other then run the play and meet up and laugh with each other as they gloat or start promising revenge on the next play. Will this make them a better football team? Who knows, there’s no way to quantify that but it absolutely makes things more fun.

3) Quincy Enunwa – In a surprising upset Enunwa might be the one running his mouth the most. He had a quiet practice to start but made his way over to the sidelines to boast to the secondary, a couple of players kindly pointed out that he hadn’t done much in practice but four or five catches later in 11-on-11s Enunwa made sure the secondary knew who just realized an through them over and over again. Enunwa made those catches all over the field, drag routes over the middle, out routes on the sidelines and a post route deep. He took his time easing into practice but once he issued a challenge to the defense by running his mouth he made sure to back it up. The players are no doubt happy to have tomorrow off but come Thursday the secondary will be looking to quiet Enunwa.