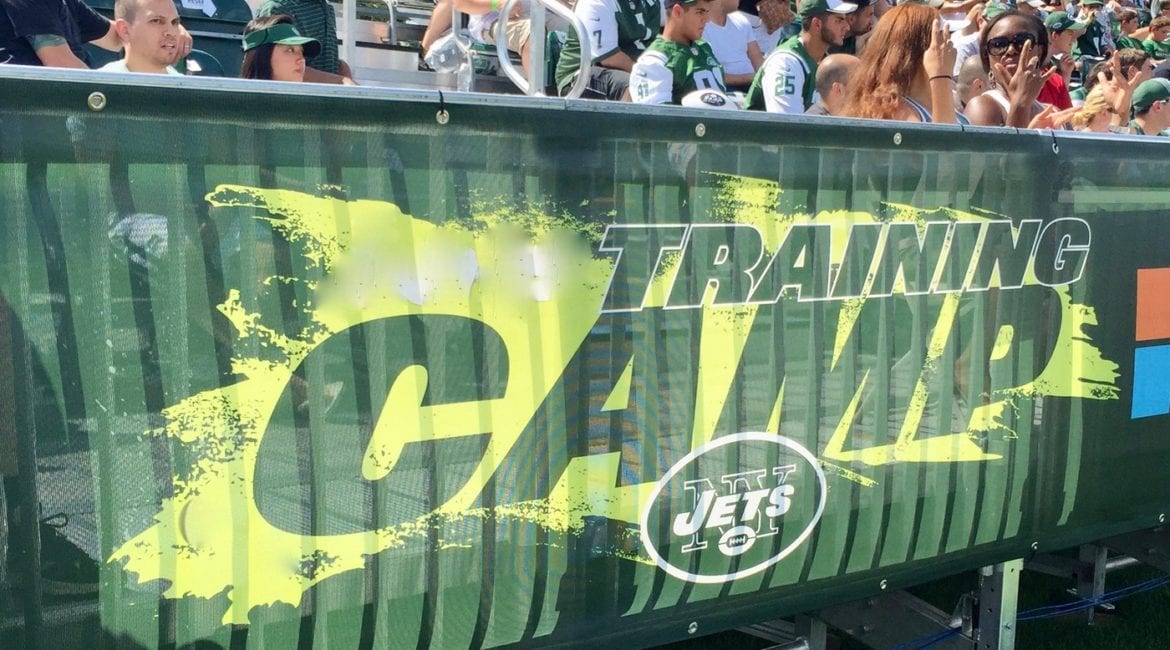 Florham Park, NJ – Day three of training camp featured Gang Green in shoulder pads for the first time this season.  But one thing that didn’t happen for the first time this season is the appearance of Sam Darnold. Nevertheless, the players were anxious for practice today now that physical contact was in play. The Jets also made some important roster moves in the last 24 hours. Here is a look at the roster changes and some behind-the-scenes observations from training camp today.

If there is one thing that is certain in football, it’s that every team will suffer its fair share of injuries. Unfortunately for the Jets, running back Elijah McGuire suffered a fractured foot on the first day of training camp and it was announced this morning that he will need surgery expecting to miss three to six weeks. The Jets worked out former Redskins and Cowboys running back Alfred Morris yesterday but Morris did not appear at today’s practice. Before training camp began today, the Jets added a new running back to the team, signing George Atkinson III. Atkinson has been in the NFL since 2014 and has played for the Oakland Raiders, Cleveland Browns and Kansas City Chiefs. He is also a special teamer, having served as a kick returner with Oakland and Cleveland. Meanwhile, tight end Bucky Hodges was waived.

On the defensive side of the ball, defensive end, Courtney Upshaw was released yesterday as the Jets signed Shaneil Jenkins. Jenkins has yet to play in a regular season game since entering the league in 2016 as an undrafted free agent.

The Jets currently have 12 wide receivers on their roster so it is going to be a tough competition for wide receivers to make the starting roster or land a depth role with the team. With guys like Robby Anderson, Quincy Enunwa, Terrelle Pryor, and Jermaine Kearse, at most, there are two more spots that will be open. One player fighting for a position is Tre McBride. McBride dazzled today in practice right from the start, catching a 70 yard pass from Josh McCown and scoring a touchdown during passing practice. Where he really showed off his abilities was during route-running drills catching all four passes thrown his way. He has an explosive first step off the line of scrimmage, shows great awareness of the ball in the air and tracks the ball while running his routes. His best moments came running curl routes as he was the fastest receiver to turn during his route, catching three out of three passes. During goal-line drills, McBride finished with four out of five catches and two touchdowns including a beautiful diving catch in the air in double coverage. That touchdown was the last play of the day, ending practice.

After practice McBride told JetsInsider that he felt “more settled in” while out on the field. Since becoming a member of the Jets, McBride has been learning from the more experienced wide receivers and has learned to “play smarter, not harder” and to be more autonomous with his game. McBride also added that he is working on perfecting “catching the football and his route-running.”

Eric Tomlinson’s Performance And Thoughts On The Tight End Battle

Having been a member of the team since 2016, Eric Tomlinson is currently the longest tenured tight end with the Jets. Last season, Tomlinson was second on the depth chart at the tight end position behind Austin Seferian-Jenkins. But now with the number one spot open, he has some stiff competition from teammates Jordan Leggett and Chris Herndon proving they can also be threats at the position. Tomlinson is mainly used as a blocking tight end and today he showed his blocking strength making three blocks during 11-on-11’s. He uses his size (6’6, 263 lbs), to push linebackers and cornerbacks away from the ball carrier, effectively taking them out of the play. Tomlinson also caught both of his targets in passing drills with one pass for 22 yards in 11-on-11’s. During goal-line drills, Tomlinson was even used as a blocking fullback. Lining up at tight end, he scored a touchdown from a 10 yard pass by Teddy Bridgewater.

After practice Tomlinson told JetsInsider that, “We’re all out here helping each other get better, doing the best we can, helping each other the best we can, and whoever comes out on top, comes out on top.” When it comes to the different playing styles, Tomlinson knows each player brings something unique to the table and is different than the others. When asked about his tenure giving him a leg up in the competition, Tomlinson said “I don’t think that matters. Each year is a new year and you have to go out there and perform better than last year.”

Since they aren’t weighted down, it’s hard to evaluate running backs when teams don’t practice in full equipment. With the injury to Elijah McGuire, Trenton Cannon has a chance to show what he can do and earn a roster spot with the team. Cannon was drafted in sixth-round of the 2018 Draft and was projected to end up on the practice squad. Cannon had himself a day when he lined up inside the 20-yard line. Using his speed to his advantage he showed the crowd how he can elude defensive backs juking out the secondary. The defense spent more time chasing him than bringing him down. Even as he was being tackled, Cannon fought for extra yardage and refused to be brought down to the ground. He finished the drill with three touchdowns but took a huge hit from safety Jamal Adams. Cannon stood up, brushed himself off, and lined up for the next play.

In the kicking competition today, Cairo Santos and Taylor Bertolet each kicked five field goals at the beginning of practice with the special teams unit. The distances for each kick were 20, 30, 35, 40, and 45 yards. Santos nailed all five field goals while Bertolet finished three for five, missing the 30 and 40 yarders. Cornerback Derrick Jones recorded an interception today during 11-on-11’s against Teddy Bridgewater. Jones had two interceptions yesterday and is starting to make a name for himself on the defense.