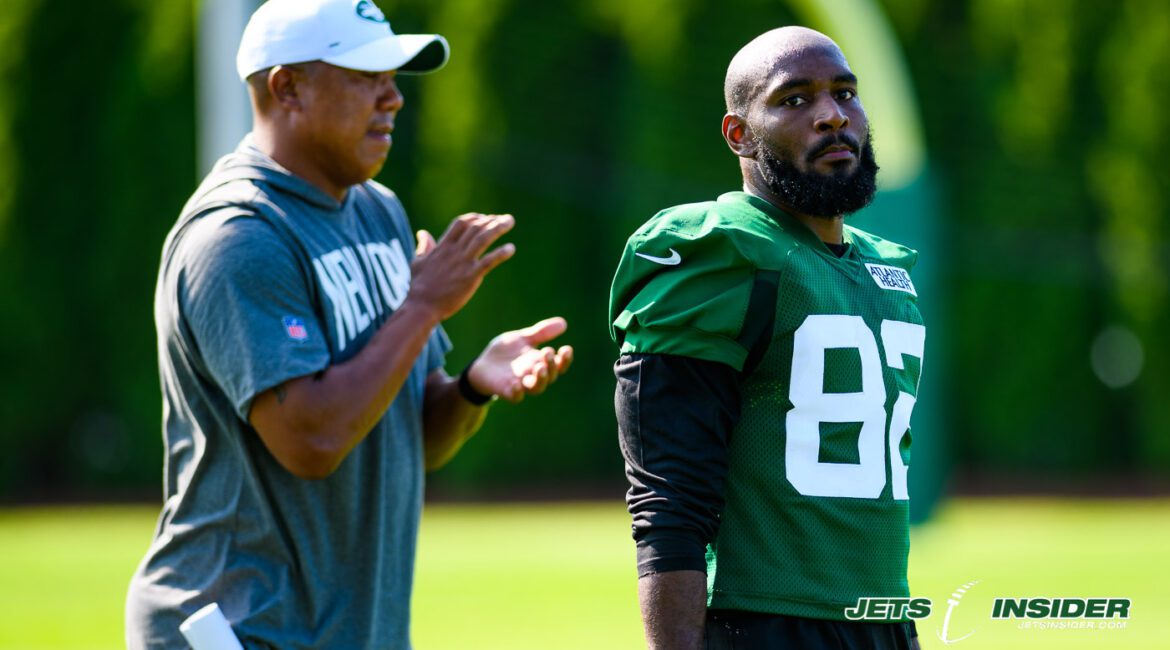 Florham Park, NJ – Due to technical difficulties with the site yesterday we apologize for no observations from practice four. All of yesterday’s observations can be rolled over into today though as some of the same players continued to impress today and we have an injury update on Brent Qvale. On top of that we will throw in some bonus observations from today.

1) Jamison Crowder limped off the field – Crowder has looked great throughout both minicamp and training camp. Today started like every other day with Crowder making plays, running wide open and catching a 50-plus-yard touchdown pass from Sam Darnold.

Unfortunately he would soon limp off the practice field with a foot injury. After practice Adam Gase said it was a foot injury and Crowder will have an MRI and be evaluated further. Hopefully it’s a minor injury because this offense needs Crowder to stay healthy to reach it’s full potential.

2) Deontay Burnett keeps making plays – The injury to Crowder would hurt even if the Jets had a ton of depth at receiver. Obviously it hurts more since the Jets have no proven depth players at the position. The good news is Deontay Burnett has looked great the last two days. Yesterday Burnett was making plays all over the field, beating corners and catching everything thrown his way. He didn’t have quite as many catches today, but he had an incredibly impressive touchdown catch. Burnett ran his route, turned and boxed out the corner, went up in the air to make the catch before landing on his back in the end zone.

Even if Crowder’s injury turns out to be minor the Jets need Burnett to play lie he has the past two days. Right now Burnett is the fourth receiver on the depth chart and the fifth likely isn’t even on the roster yet.

3) Darryl Roberts had his second straight excellent practice – After struggling in the first few days of camp, Darryl Roberts has rebounded nicely. Roberts has been busy breaking up passes and locking down receivers, Robby Anderson felt the brunt of this today. Roberts has been very physical, jamming receivers and cutting them off their spot. He has been beating receivers to position then boxing them out so they can’t get to the ball and this would have led to an interception if Rontez Miles could have held on to the ball.

Derrick Jones had the play of the day on defense, picking off Trevor Siemian. Jones was covering Josh Bellamy, stayed stuck on his hip then made a diving catch to come up with the interception. Great body control from Jones as he was able to just turn his body enough to secure the pick without letting it touch the ground.

The offensive line and defensive line/linebackers did one-on-one pass-rushing drills and four reps stood out the most. Chuma Edoga stuffed and manhandled Jamey Mosley. C.J.’s younger brother kept fighting but Edoga had position and wouldn’t let him wiggle free at all. It looked like Edoga was going to do the same to Tarell Bashum on the next rep, but Bashum hit Edgoa with a counter and was able to slip past him.

Jachai Polite was lined up against Eric Smith, hit him with a quick jab step inside then exploded around the outside to cruise past Smith. Polite was also able to work his way into a couple of reps with the second-team during 11-on-11’s. He’s still got a ways to go before he can be the pass-rusher the fans crave but he’s starting to show the coaches a little more everyday.

Quinnen Williams has been getting a ton of second-team reps in team drills and while he hasn’t been racking up sacks you can see glimpses of how disruptive he can be. In one-on-one drills he simply bulldozed Jon Toth with relative ease.

After practice Gase said Qvale will be “out for awhile,” but said he doesn’t need surgery and it won’t end his season.