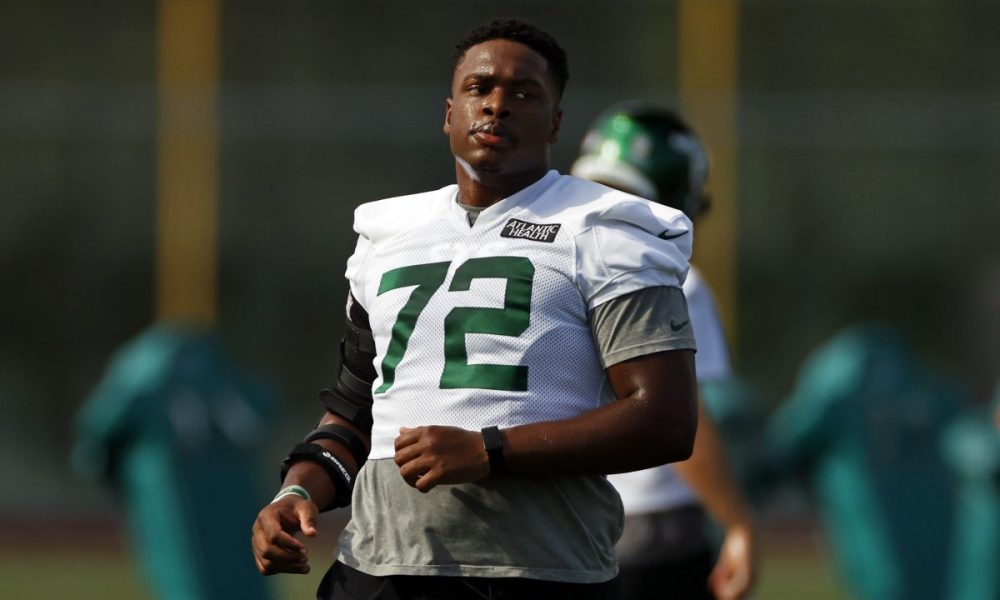 The first day of padded practice was just winding to a close. The team was preparing to head into the last period of the day when everything stopped. As reporters were watching the last play of the period it was obvious that something was off. No one saw exactly what happened, but someone was clearly on the ground with teammates surrounding him. The immediate silence and medical personnel rushing on the field gave cause for concern. Shortly after being taken off on a spine board and into an ambulance came the news that it was a neck injury to offensive guard, Cameron Clark.

As Clark was being tended to the rest of the practice was called off. Afterwards, Robert Saleh didn’t see exactly what happened but said, “I caught it out of the corner of my eye. It looked like he was kicking (out) in pass protection and then he was on the ground.”

Saleh wanted to wait until the 6’4″ 308-pound lineman was properly evaluated before releasing anymore information, but said Clark did have “some” movement in his extremities. After being loaded onto the ambulance Clark was taken to Morristown Medical Center for further evaluation.

“It’s a scary situation when someone gets carted off the field,” Zach Wilson said after practice. “Just praying that he’s going to be alright.”

Before the injury, practice was humming along. But as soon as the injury happened football was the last thing on anyone’s mind.

“It’s never good because football goes away at that moment,” Saleh said. “It’s about the person, his family, everyone in his life. That’s what takes precedence at that moment. Football just goes away.

“I’m an optimist. God willing, everything is going to be just fine, but we’ll wait for the evaluation.”