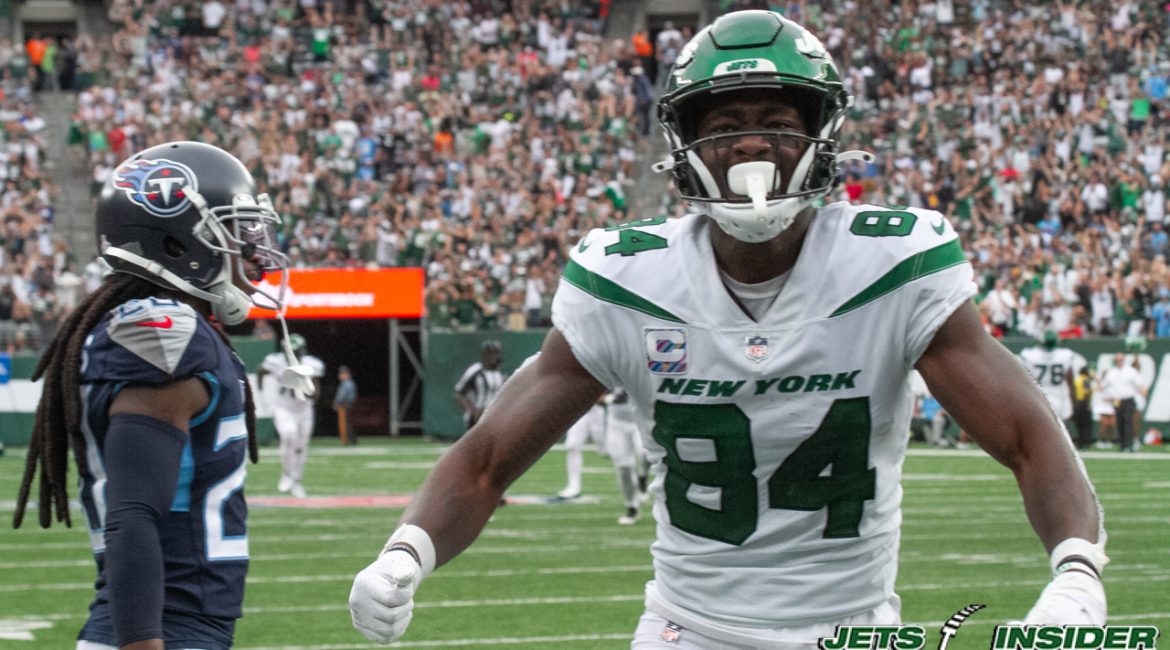 EAST RUTHERFORD, NJ – It took a game that would make Mr. Toad proud, but the Jets got their first win of the season. After another disastrous start from the offense, more specifically Corey Davis, it looked like a new incompetent looking loss was on the horizon. Yet another drop with the added bonus of a slip out of his break on a pass headed his way led to Zach Wilson’s eighth interception of the year and had the Jets looking forever doomed. Screams of, “bench/cut him” echoed throughout the stadium. But the defense never wavered, managing to hold just strong enough until the offense rebounded and that same Corey Davis helped seal the win.

“The defense has been spectacular all season,” Robert Saleh said. “Stats don’t do justice (to) what they have been able to accomplish. The d-line was outstanding today. The linebackers were outstanding today. The young DBs, play after play and through all of the adversity… call them what you will. We had that game over several times in regulation, but credit to them. They were fantastic.”

After that horrible start and the defense keeping them in the game, Davis earned redemption. Four catches for 111 yards with 53 of those yards coming on what, at the time, looked like it would be a game-winning touchdown.

“He’s been good at that, just keeping it up there live,” Davis said. “He said go deep, so I listened. Threw it up, it was a great ball, real good ball.”

It wasn’t a game-winning touchdown though because this game couldn’t end so simply. The Jets defense played outstanding on all but two fourth quarter drives. Ryan Tannehill was under siege like Steven Seagal as the Jets battered him around all day, sacking him seven times and adding another seven QB hits. They also managed to do an excellent job of containing Derrick Henry for three quarters, but that fourth quarter tends to get tricky with Henry. Right as the fourth quarter opened, Henry broke off runs 18, nine and 22, with a Jeremy McNichols 11 yard run mixed in, before capping the drive off with a one-yard run to tie the game at 17.

McNichols was a giant pain in the butt for the Jets defense as well. Through the first three quarters the only thing working for the Titans was screens to McNichols. The Titans weren’t shy about exploiting this either. But eight catches and 74 yards later the Jets defense finally figured out how to stop it in overtime. Twice the Titans looked to the screen in overtime, both times the defense snuffed it out.

“They were doing screens on third and longs so we were in zone for a lot of those. Good for them for getting in the right call and the right plays. They made some big plays,” C.J. Mosley said. “That fourth quarter drive when they did score, me and Quincy (Williams) did miss that tackle on that screen so we just got to get him down at that point. But we just kept fighting, even though they got some yards here or there our guys didn’t quit. They kept fighting.”

Fight they did. Fight, scratch, claw. All that good stuff. To the tune of seven sacks for a loss of 45 yards. But we are burying the lede here. The story isn’t about the defense, as great as it was. It’s not about the Williams brothers making history as the first brother duo to get sacks in the same game for the same team. Nor is this a story about the Bryces, Hall and Huff having great games. This isn’t a Corey Davis redemption story. Or a Corey Davis revenge story, either. This is the story about Zach Wilson’s first NFL win. And the kid earned it. It was far from perfect, but it was more than good enough.

Wilson finished the day 21-34 for 297 yards (8.7 yards per attempt), two touchdown and the one (Corey Davis slip) interception. He was only sacked only once. The offensive line struggled to get push in the run game, but did manage to protect Wilson and give him time to attack downfield. Four catches for 111 yards from Davis. Three catches for 92 yards from Keelan Cole (long of 54). And seven catches for 61 from Jamison Crowder (long of 29). Give Wilson time and he has the ability to pick apart defenses down field. They just have to give him the time.

“Yeah, what I felt I improved on today was playing within the offense,” Wilson said. “There were times, I don’t think a lot of people see it, but getting a couple of my check downs over the ball and taking completions when they’re there and not forcing things. I wouldn’t say that some of the off-schedule plays that we had necessarily were trying to do too much. That was just the part of the game I feel like I have that comes naturally to me was being able to do things off-schedule. I’m going to keep improving on taking the easy ones, reacting to what a defense gives me and be able to get completions and don’t put that stress on the o-line.”

Next up, a trip to London to play the Falcons where the Jets will look to build on this momentum.