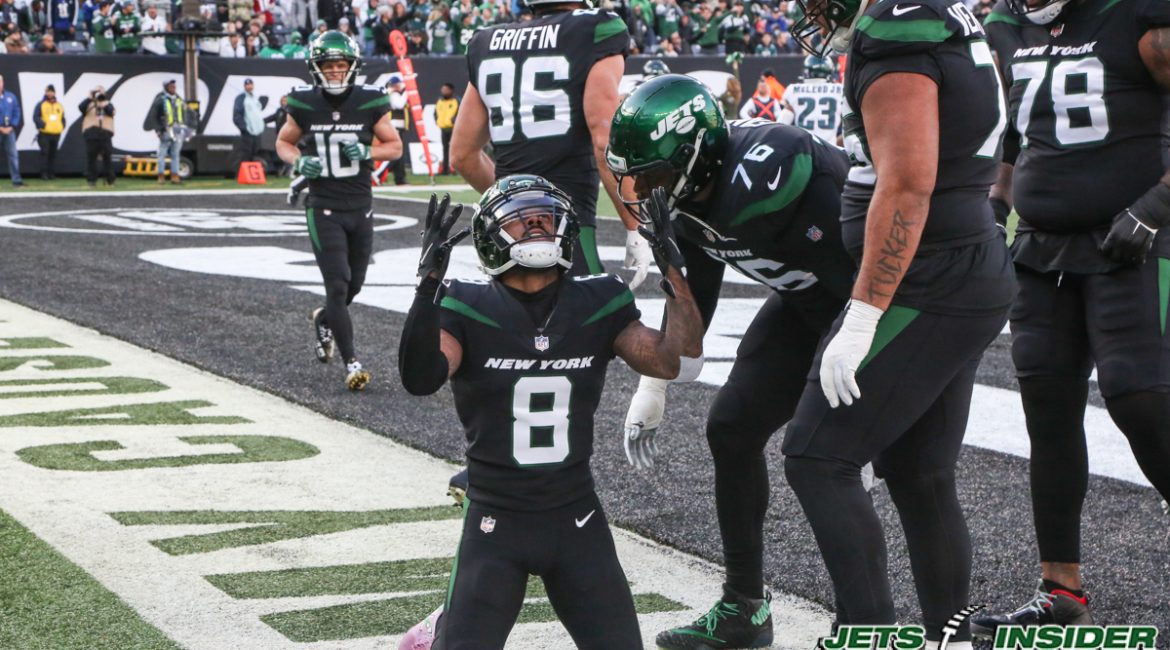 When looking at the 2021 New York Jets offense, one of the main factors that sticks out is the wide receiver group. Possessing a good amount of talent, the position group was plagued by both inconsistency and injuries throughout the year. Elijah Moore, the team’s second round pick in 2021, showed flashes of becoming a superstar wide receiver but was hampered by injuries and only appeared in 11 games. Corey Davis, an important free agent signing in that offseason, had five drops, 492 yards, and only appeared in nine games.

These injuries tested the depth of the Jets position group, promoting players like Jeff Smith, Denzel Mims, and Braxton Berrios into starting roles. Smith and Mims posted minimal production, with neither eclipsing 200 yards receiving; this was especially disappointing for Mims, as he was expected to be a key contributor. Berrios impressed down the stretch, becoming Zach Wilson’s go-to target and helped move the offense down the field.

Even with Berrios’s end of year breakout, the Jets saw a need to improve their wide receiver room. They needed another outside, potential #1 receiver type that could pair with Moore and Davis. This ended up being Garrett Wilson, who was selected with the 10th pick in the 2022 NFL Draft.

By adding Wilson to a room that already had players like Moore, Davis, and Berrios, the Jets aimed to give Zach Wilson a number of weapons to help the offense run smoothly. Wilson, Moore, and Davis have the ability to line up at all three receiver positions, while Berrios serves as a talented #4 receiver working out of the slot. If players like Mims and Smith are also taken into account, the Jets have decent depth at their receiver position to avoid a situation like last year.

Up until this point in camp, the receivers have shown the potential versatility and talent they can bring to the Jets offense in 2022. Elijah Moore has picked up from where he left off last year, ripping off crisp route after crisp route and making contested catches on a consistent basis. He had the highlight of the day on Tuesday, effortlessly snagging a back-shoulder Joe Flacco pass with one hand. More importantly for the Jets, he has shown a good chemistry with QB Zach Wilson. Wilson has consistently looked for him in tough situations and Moore has returned the favor by making all the catches Wilson has needed him to.

Garrett Wilson has also popped up a lot in training camp, beginning to show his first round pedigree on a consistent basis. Whether its been with Zach Wilson or Joe Flacco, G.Wilson has shown slippery route running and above-average body control to make catches anywhere along the field. Davis has also looked the part during training camp, make tough contested catches when he has been targeted in practice.

The Jets coaches, namely offensive coordinator Mike LaFleur and head coach Robert Saleh, have taken notice of the receivers’ performances. LaFleur spoke about Moore’s mentality towards playing receiver in this offense. “Really pleased with where he’s at, I know there’s still a long way to go for him. I know what his expectation and standard is for himself, and I know I hold the same one for him… I know he has that mindset when he goes out there and he knows what he’s doing like he does, I think good things are going to happen for him.”

LaFleur also spoke about Garrett Wilson’s body control on routes and catches. “He’s really loose in the lower half, it’s a very unique trait that he possesses. He can get really far outside of his frame. I like to equate it to a basketball player, crossing over, Kyrie Irving, how far they can get outside of their frame and play on their insteps and still have body control. Some guys, particularly some of the bigger guys, it’s just a struggle for them because they are bigger, that’s their superpower. His is that lower half that is very unique and then on top of it he has that basketball background. His body control when the ball is in the air is very evident. “

Saleh spoke about Moore and Wilson as well, saying that Moore is “wired” to constantly better himself as a player and that competition will help him and the other receivers. “The next step to competition being the best motivator is that you got individuals who are internally and externally motivated. So, when you look at a guy like Elijah, he doesn’t care who’s surrounding him. He’s going to give everything he has all the time,” said Saleh. About Wilson, Saleh expressed that he is “very, very athletic” as a receiver. Similar to LaFleur, Saleh said Wilson has “unbelievable body control and power. He’s got great hands. He’s explosive in and out of his breaks. He’s very wiggly in and out of his breaks. He is talented. Obviously, there’s things that he’s going to have to learn as a rookie, especially with moving around in our offense, but at the same time, we’re really excited about him and the direction he’s going.”

Saleh also spoke about Davis and what he brings to the table, saying he brings “veteran leadership” and a big body that has the “ability to do all the different things that we ask him to do.” He also praised Davis’s mindset and said, “He’s in such a good mental head space right now. His body feels good, he feels good.”

Outside of the starting WRs, the Jets depth at WR has made some waves during the team’s practices. After being praised during OTAs for the shape he was in, Denzel Mims has made multiple contested catches and has looked dominant at times against the second and third team. Irvin Charles, an UDFA signing, has stood out in a few practices and Tarik Black has also popped at moments.

The WR position group is obviously not set in stone, especially at the back end of it. Mims, Smith, Charles, and Black are options to fill out the back end of the position group, but players like Calvin Jackson, Rashard Davis, and Keshunn Abram are competing for the same spots. The sheer number of receivers competing for roster spots, causing Saleh to call them a “competitive” group. Between the Jets’ own roster decisions and other moves teams make around the league, there is potential for shake-ups at the number 5 and 6 receiver slots on the roster.

Despite this potential for fluctuation, the Jets WR core is deeper and more talented than years past heading into the first week of the preseason. The addition of Wilson to the duo of Moore and Davis gives the team the potential for one of the better groups in the league, while Berrios serves as a talented number 4 receiver out of the slot. Combining with the additions to the TE room in Conklin and Uzomah, the Jets offense has much more for Zach Wilson to work with in his second year. The best case scenario for the Jets is that Moore makes his second year leap, Davis has a bounce-back year and Garrett Wilson has a solid rookie season. It remains to be seen how the receiver core will ultimately perform this season, but if Moore, Wilson, and Davis continue their solid camps, the Jets offense should look much better this season.