Laken Tomlinson Will Help To Solidify Jets O-Line in 2022 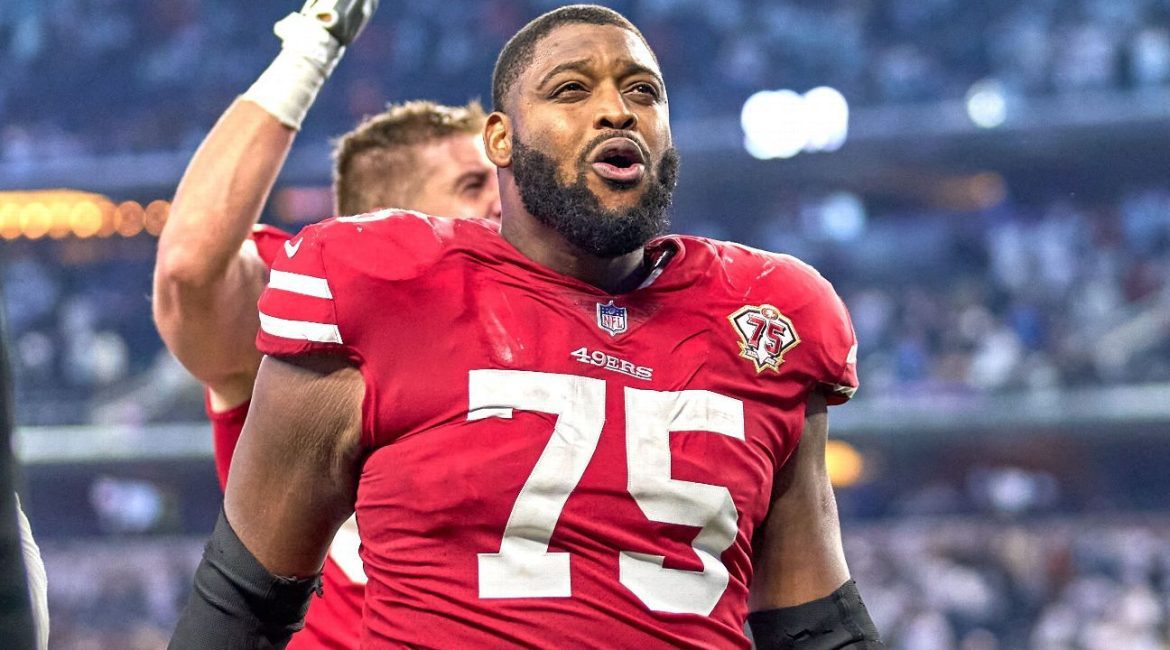 At the start of free agency, the Jets had multiple areas of need. Between shoring up their secondary to addressing one of the worst tight end rooms in all of the NFL, the organization desperately had to inject talent into the roster. Among these needs, interior offensive line was at the top of the list. The team’s right guard play, headlined by Greg Van Roten, was severely below average and the line’s Achilles’ heel. Addressing this need would help solidify an otherwise up and coming offensive line headlined by Alijah Vera-Tucker and George Fant.

And this need was indeed addressed, as the team signed former 49ers Pro Bowl Guard Laken Tomlinson to a three year, $41.2 million contract. Tomlinson brings both skill and durability to the Jets on the offensive line. Tomlinson has started 80 games in a row and was the 13th best ranked run-blocking guard according to PFF, making him a perfect fit in the wide-zone run scheme that the Jets run.

Regarding his pass blocking, Tomlinson is skilled in that area too; he only gave up two sacks in 2021 and had a PFF pass-blocking grade of 75.2. This well-balanced combination of skills from Tomlinson is the reason the Jets signed him to fill their huge need on the interior offensive line.

In his introductory press conference, Tomlinson said that “a couple of teams” really wanted him and that San Francisco was trying to get him back, but he ultimately felt that the Jets were the best place for him. “This ended up being the best thing for me and my family, and I’m extremely appreciative to be here,” said Tomlinson. The Pro Bowl guard said that the presence of HC Robert Saleh, OC Mike LaFleur, and Offensive Line Coach John Benton was a big factor in his decision, stating how their “familiarity in the building” made it easier for him to make a decision.

Tomlinson has already connected with his teammates, despite only being on the team for a short period of time. “Everyone introduced themselves, everyone was super nice congratulating me. It’s been cool, man, already being in the group chat,” said Tomlinson.

With his addition, the Jets have the potential to be one of the better offensive line units in their division and possibly the entire league. Tomlinson is joining a group that already has up and coming guard Alijah Vera-Tucker and breakout tackle George Fant. With a serviceable center, Connor McGovern, and Mekhi Becton still having the talent to reach the All-Pro potential he displayed in his rookie season.

Head Coach Robert Saleh echoed this sentiment when discussing where Tomlinson will play on the line. Saleh said, “Laken, like I said, he’s shown, he’s had a lot of success at left guard in this league as a Pro Bowler last year and it’s something that we just don’t want to mess with for him.” As a result of this move, Vera-Tucker will slide across the line to play right guard. Saleh is confident in Vera-Tucker’s ability to adjust, saying that he “has shown flexibility in college, he played tackle, he played guard. He’s got tremendous flexibility and he’s still a young pup. There’s a lot of things that he can learn.” The Jets’ Head Coach also said that Vera-Tucker’s athleticism will allow him to pick up right guard “very quick”.

There will be no way of knowing the true ability of the Jets revamped offensive line until the games of the 2022-2023 season begin. More pieces could be rearranged before the season arrives; the Jets have constantly been given tackle Ikem Ekwonu in mock drafts and there are rumors swirling about a possible Mekhi Becton trade. But despite the potential for more changes, this currently constructed unit should have high hopes heading into next year. If Tomlinson can help build off of what the Jets started last year on the line, it will give their QB, offense, and overall team a great chance to win games every week.