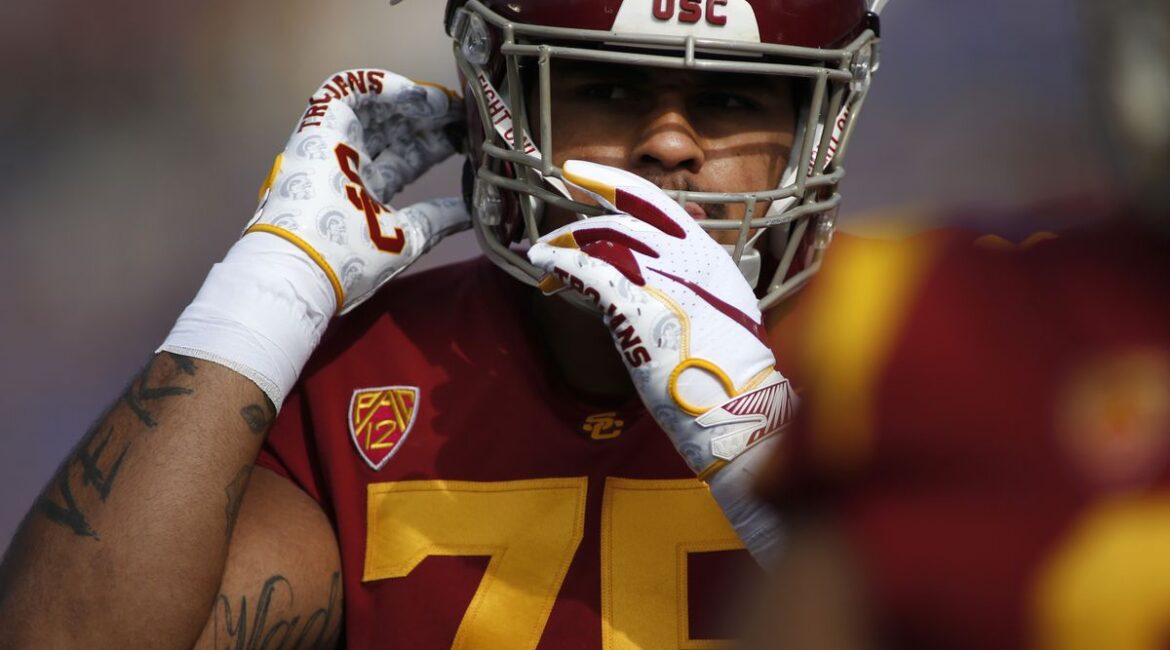 Everyone, myself included, expected the Jets to address the offensive line in free agency. They came away with Dan Feeney, a hell of a mullet but a depth piece at most. This means we can all expect Joe Douglas to attack the offensive line in the draft, right? Well, maybe. We’ll see how the board falls.

Before we get into the prospects and who is good, and also a fit, let’s talk about the guys already on the roster. We know that they’re set at left tackle, Mekhi Becton, assuming he can stay healthy, is a stud. Nothing to worry about there. On the opposite side, George Fant played well above expectations last year and looked solid. On top of that, Fant is a much better fit for the wide-zone rushing attack than he was for Adam Gase’s system. Douglas feels the same about center, Connor McGovern. McGovern struggled more than expected last season and it would be easy enough to chalk that up to playing next to two struggling guards. But Douglas thinks McGovern will improve next year on the strength of the system alone.

This doesn’t mean we can rule out Douglas drafting a center or right tackle. Both Fant and McGovern can be cut next offseason with little dead money. The Jets could also draft a right tackle, start him at right guard then slide him over after Fant leaves. They could also slide McGovern to guard, or draft a center to play backup and takeover in the future. What all of this does mean is, they desperately need two guards they can plug and play. Douglas doesn’t need to fill every single hole on this roster, but with a rookie quarterback he absolutely needs to fill every single hole on the offensive line.

Sounds easy enough, but reality is much more difficult. This is a deep offensive line class but most of the talent is at tackle. Not just played tackle in college, but also project as tackles in the NFL. Another problem is the Jets are far from the only team looking for offensive line help. These players will be in high demand. Then there’s the issue I haven’t seen people talking about enough. And that’s fit. I keep seeing people mock Alabama’s Landon Dickerson to the Jets, but he’s better suited for a man/gap/power scheme. It’s not just about talent, but does the talent match the wide-zone system? This means they are looking for athleticism to move and cover more ground more than straight bullrush power. So, Alabama and Notre Dame lineman, not likely going to be a fit. It’s possible Douglas drafts a player from a more power/gap scheme and thinks they are athletic enough to play in a wide-zone, but it’s not as likely.

Now that that’s all out of the way, let’s get to these prospects.

Sewell, Slater and Darrishaw are guaranteed to be gone by the 23rd pick. Vera-Tucker and Jenkins will likely be gone as well. Maybe Douglas gets aggressive and tries to move up a couple of spots for one of these two. Vera-Tucker is going to be an elite guard, he would be the perfect and ideal pick for the Jets at 23. But again, I doubt he lasts until then. Taking Jenkins would be a long-term play and it would simply mean he was just too good to pass up. If neither Vera-Tucker or Jenkins is onboard at 23, expect the Jets to take another position. If someone like Jalen Mayfield was still onboard for their second-round pick I could see that happening, but 23 might be too high for him.

Cosmi played both left and right tackle at Texas and he could be a good fit at right tackle for the Jets. He will need to bulk up and add some thickness to his frame, but his length, athleticism and ability to move while staying in the defenders way are intriguing.

Humprey is best suited for a man/gap/power scheme, but some scouts think his football IQ is good enough that scheme doesn’t matter much. And maybe it doesn’t, but I’m guessing it will matter enough to Douglas.

Davis is interesting for a couple of reasons. Scouts that I talked to said he would be best suited for an inside zone, but has the ability to play in a wide zone. He just will need some coaching up with technique to do so. Davis’ 2019 season was more impressive before his play slipped a bit last year, but he has the tools that could help him unlock all his potential.

Green was a defensive tackle before switching to the offensive line at Illinois. He’s played both guard and center and has the type of athleticism Douglas is looking for. He’s far from a finished product and might take some time to develop, but he’s a fit for this offense. If he can blend his athleticism with learning to expand his game he could be a gem for someone to uncover on Day Three.