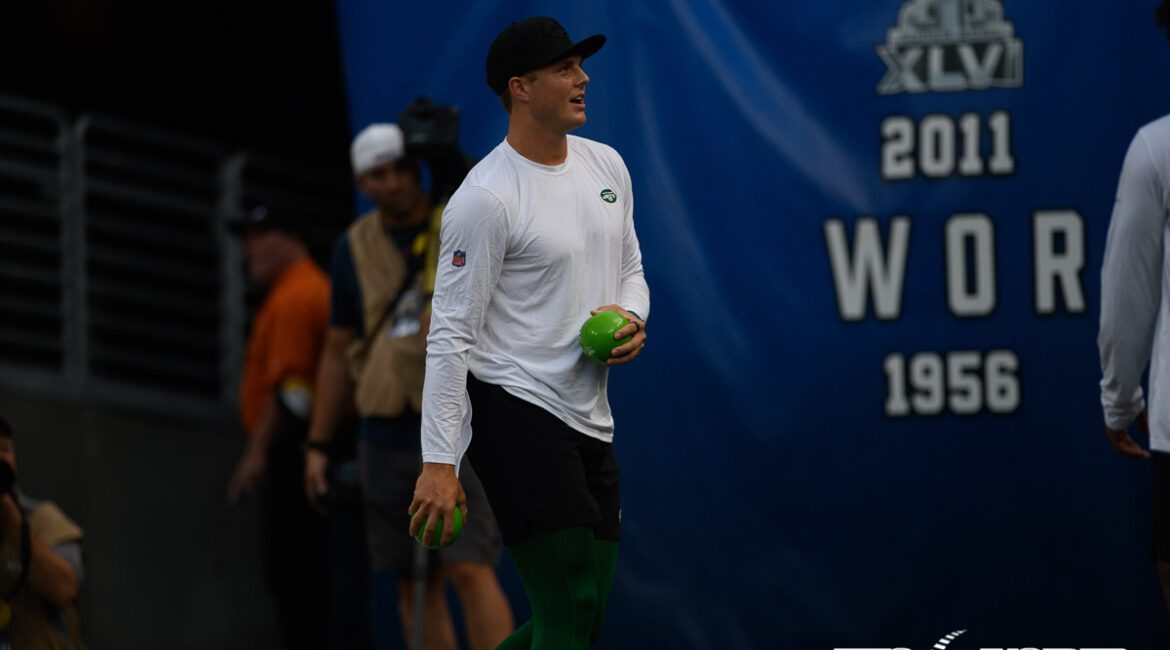 Looking back on the 2021 season in a overall sense, it’s clear that Zach Wilson did not have the best year. Playing in 13 games, Wilson threw for 2,334 yards, nine touchdowns, and 11 interceptions. He had a 55.6 completion percentage with 6.1 yards per attempt, while also adding four rushing touchdowns. But looking beyond the numbers, Wilson’s season can be split into two halves.

The first half, which were Weeks 1-5 before Wilson got hurt, Wilson threw seven interceptions. He had his highs, such as a 297 yard, two touchdown performance against the Titans in Week 4, and his lows, exemplified by his four interception performance against the Patriots in Week 2. Throughout this stretch, Wilson consistently held the ball too long and had accuracy issues. He consistently showed off his arm strength, but this aggressiveness led to the aforementioned issues. Wilson was not helped by the team’s lackluster run game, interior pass blocking, and drops during this stretch; yet, he still looked like a player who needed to fully adjust to the NFL game.

Returning in Week 12 from a lower body injury, Wilson was more conservative and decisive as a quarterback. According to an an article from Jets X-Factor, Wilson only threw an interception on 0.99% of his attempts over the last seven weeks of the season. This ranked fourth behind only Aaron Rodgers, Matt Ryan, and Patrick Mahomes in that stretch. In addition, Wilson scrambled 12 times for 157 yards over the last five games of the year, opting to get yards himself while the Jets dealt with a plethora of injuries on the offensive side of the ball.

Taking his rookie year into account, Wilson sought to improve both the physical and mental aspects of his game. According to offensive coordinator Mike LaFleur, Wilson has developed and matured from a physical standpoint. “He looks like one year older of a man. Just being all the focus since January on his diet and his body to just put himself in the best situation from an athletic standpoint. He really bought into it. Everything he does, he is so fully invested into it, and you can see that it meant something to him,” said LaFleur. Head Coach Robert Saleh added to this sentiment, stating how Wilson looked “thick” and “confident”.

From a mental perspective, LaFleur said he has recognized Wilson’s improvement with processing the field. “From a mental standpoint and obviously all of these guys going into year two, whether it be the rookies or even a guy like Corey Davis when you’re in an offense for the second year, you don’t have to learn what words mean anymore. Now you just have to learn how can I be the most detailed with it and play the fastest I can to perform on Sunday’s… And last, just in the huddle. He’s so comfortable before I give him a play, he’s dapping up everybody else and talking to them as I’m saying the play. That tells you right there he kind of knows what’s being said and can relay it to the guys. It’s been pretty cool from all those angles,” said LaFleur. Saleh added that “He looks good, he’s confident, he’s smiling, he’s vocal… He’s in a good space, too.”

In response to his coaches’ comments, Wilson said this offseason was the first time he took a bigger focus on his nutrition. “I tried to have a written plan of how much to eat, when to eat, tracking everything down to the macro, have somebody help me with all that stuff. That’s probably been the biggest difference as far as just being able to put good weight on,” said Wilson. Wilson also said he has more energy and stamina throughout the duration of a practice and that his weight gain has made him feel “faster” and “more athletic”.

Regarding his development, Wilson said he feels more comfortable as a quarterback. “I wouldn’t say, extremely sharper is the right word, I would just say you’re comfortable, your understanding of what things you need to think about, what things you don’t need to think about. You’re just more efficient within your thoughts. Being able to simplify the game, I just feel like you can see more by seeing less, if that makes any sense.” The second-year QB also mentioned how he wants to take a bigger leadership role, saying that being vocal and getting up in front of the team is sometimes needed.

Even with all of the additions to the team in the offseason, the progress and development of Zach Wilson is the most important aspect of the Jets’ 2022 season. His play directly ties into the progress of receivers like Garrett Wilson and Elijah Moore and RBs Michael Carter and Breece Hall, while also having an impact on how far this Jets team can actually go. Wilson’s potential improvement on his reads, decision-making, and accuracy will determine if he can improve on his rookie year numbers and take a true second-year leap.

If Saleh, LaFleur, and Wilson himself are to believed, then the Zach Wilson that takes the field in Week 1 of 2022 will be a much better quarterback than rookie year Wilson. A second year leap from Wilson will not only move the Jets forward in their rebuild, but will give the organization confidence that they have their answer at the most important position in football. The determination of Wilson being the answer or not will have to wait until the season starts, so Jets fans must hope that Wilson shows signs of being a more decisive, comfortable and confident player throughout the offseason.