JetsInsider.com > News > Blogs > The Battle for Left Tackle Will Define the OL for 2022 and Beyond 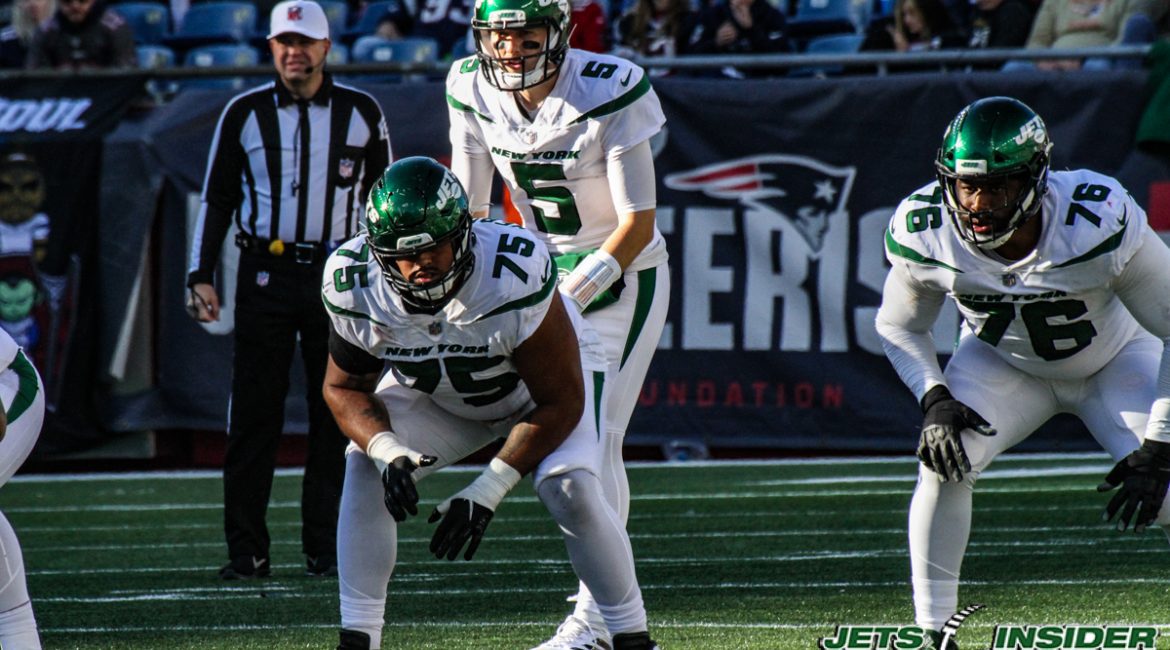 Who will win the battle? Will it be the first-round pick from just two years ago (Joe Douglas’ first ever draft pick), recovering from a fractured kneecap? Or the journeyman vet who just had the best year of his career and is entering a contract year? How the Jets decisions makers feel about these players will impact the approach to this offseason and beyond.

Alijah Vera-Tucker will be expected to continue his development as a player, building upon the massive potential he showed in his rookie season. Connor McGovern, who missed the back half of the season with a knee injury, will also be expected to build upon his 2021 season. But the team is also expected to add to the line through the draft; they have been linked to players like Evan Neal and Ikem Ekwonu in the early first-round, Trevor Penning in a potential trade-down situation, and Zion Johnson at the top of the second round.

While the Jets need their stalwarts on the offensive line to improve and could potentially add to their unit, the biggest storyline will be based around the position battle between George Fant and Mekhi Becton. Becton suffered a knee injury in Week 1. Early reports had a very optimistic timetable for Becton’s return that he wasn’t able to meet. Which, of course, led to speculation that Jets brass isn’t happy with him. While Becton was out, George Fant slid into the left tackle position and played great. Fant, according to PFF, had a 71.1 PFF Grade on the season and only allowed one sack on the entire season. PFF also showed that Fant only allowed 18 total pressures in 594 pass-blocking snaps and had a pressure rate of only 3.03%.

Fant’s season was not perfect by any stretch of the imagination, as he was only average in the run game. His elite display in the pass-blocking game more than made up for this, though. Fant stepping up in the left tackle position helped the Jets immensely. It eased the loss of Becton and allowed Morgan Moses to play the right tackle position, making the Jets overall offensive line better.

Going into 2022, Robert Saleh understands that Becton cannot just be handed back his old position. Saleh said Becton has to “come in and reassert himself into the starting lineup” next season. “I think Mekhi has the skill set to do whatever he wants. He just has to put his mind to it.” Saleh also praised Fant for the job he has done at left tackle and does not want to immediately remove him from the position. “It’d be a disservice to George and the work that he’s put in and the things he was able to do this year to just tell him that he can’t compete for that job.”

Complicating matters even further, Saleh said drafting another tackle is not out of the question for the Jets. “You’re always evaluating every single position, whether you need it or not, just so you can keep in touch with what the standard is and maintain a fresh look at everything,” Saleh said.

Despite all of the uncertainty, the Jets head coach is excited for the battle that will take place for left tackle. Saleh said that, “We’re kind of spoiled in that regard that we’ve got two really, really good tackles… and it’s going to be great to watch those guys compete.”

Within this pivotal offseason, the left tackle position battle could have ramifications way beyond 2022. Fant is a free agent after this upcoming season, and him winning the position would most likely earn him a new contract. In the same sense, the Jets would also need to see Becton stay on the field at right tackle. Becton needs to prove that he can sustain a full season in the NFL and play like he did in his rookie year; anymore struggles to stay on the field could cause the Jets to move on from him. And If Becton wins the battle, obviously the Jets would need to see how Fant would adjust to being on the right side again before giving him a new deal.

The best case scenario for the Jets is for both Fant and Becton to be healthy and dominant in 2022, regardless of what side they are playing on. Even if they draft a player like Neal or Ekwonu, the line needs both Becton and Fant to play to the best of their capabilities. Fant has already proven he can be the left tackle the Jets need; the pressure is truly on Becton to come back with a vengeance and become the force he was in his rookie season.

Outside of Zach Wilson’s development from Year 1 to Year 2, this will be the most important storyline for the Jets’ offense this offseason. The position battle between Fant and Becton can and will decide the future of the Jets offensive line for the foreseeable future. For a team that still needs so much talent, the Jets have to hope for the best possible outcome of the two tackles dominating on either side of the line.