Today’s Observations: All About Zach 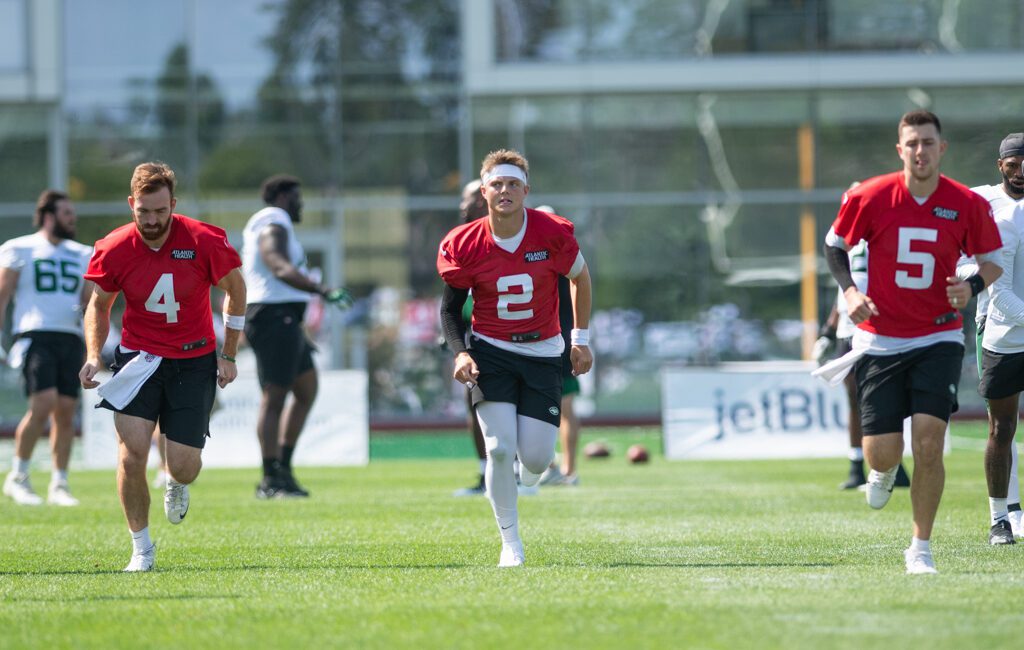 Two days of James Morgan and Mike White running the offense was enough. On the first play of the day, the difference was crystal clear. Zach Wilson dropped back, launched a 40-yard bomb while the defender basically tackled Elijah Moore and it still wasn’t enough to stop the completion.

“Yeah, even that one. Not the greatest ball,” Wilson said. “I could’ve put it out there more to the left and let him run to it. But just the look, it’s one of those (situations) we took a shot down the field, big play-action pass and Elijah did a great job coming up with the catch. So even then, a lot of learning comes out of just that play. Being able to get it out sooner, and the depth perception. You start to pick up all these little things just in that one play that you can apply later on. Every play has growth and that was one of them.”

Unfortunately things took a turn for the worse and immediately started to resemble the previous two days of practice. Of course there’s no reason to panic. Or to even be concerned in the slightest. Wilson just had to shake the rust off, so what if the practice field has an orangey-brown tint to it. The field-crew can wash that off before fans come to watch tomorrow’s practice.

“(I) Just (need to) learn. That’s what practice is for,” Wilson said. “Everyday is going to have something frustrating. That’s why I’m out here. I’m just trying to learn each day, just knowing my plays better and the different looks our defense is throwing at us. It’s going to be a process.”

Wilson was indecisive and even when he decided to throw he seemed unsure of where exactly to throw. On one play in goal-line drills, Wilson had his choice of an open receiver at both the back and front pylon. He ultimately split the difference and rifled a pass in between both that neither could catch. A couple plays later, Wilson scanned the field and threw a pass directly into Marcus Maye’s hands.

“Great learning experience, just like I said with the other ones,” Wilson said. “It was one that I felt, my initial reaction, (the) backer didn’t push all the way through. I was glancing across the middle. The receiver was doing his job, he’s running his route. I tried to throw it sooner than I was supposed to and there’s a lot of bodies over there. I shouldn’t have even thrown the ball. It’s a learning experience.”

It wasn’t all terrible after that first throw. Wilson was able to find Corey Davis, who beat Bless Austin, for a touchdown. But admittedly that’s all the highlights for the day. A bad first day of training camp is hardly unexpected for a rookie quarterback, so fans shouldn’t worry at all. He’ll settle down and catch-up pretty quickly. Wilson took every first-team rep in practice, and even took a handful of second-team reps to try to makeup for missing the previous two practices. He has 16 more practices, including practices against two other teams and three preseason games to get ready to start the season. Because, barring injury, start the season he will. Even if Saleh wouldn’t quite guarantee Wilson the starting job, he knows that we know and everyone knows, he’ll be the starter.

“Call it the inside lane,” Saleh said. “It’s his to lose. I never want to make a promise that I can’t keep. He took all of the first-team reps. It’s just a matter of him continuing to get better like we know he will.”