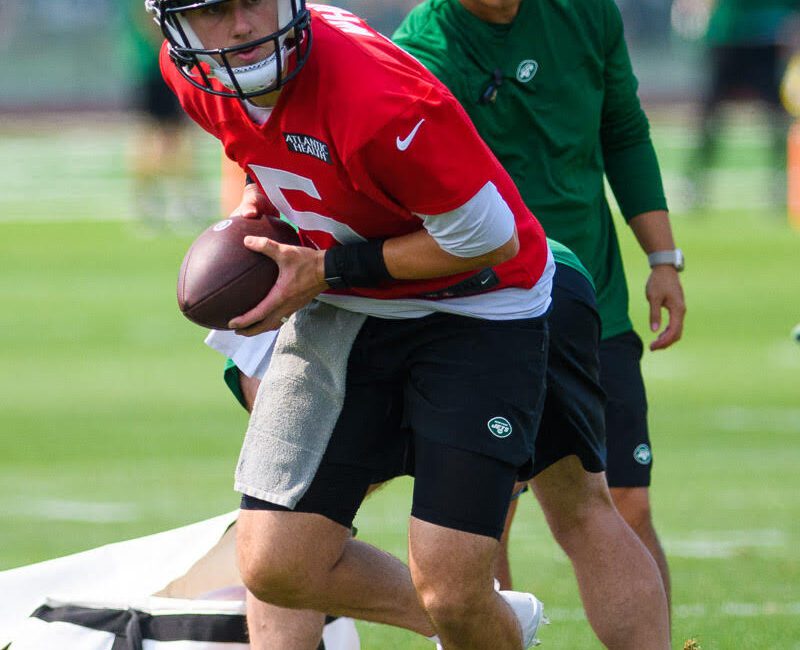 The Jets are ushering in a new regime. Excitement abounds. Just not as much excitement as everyone was hoping for. It still felt like the first day of camp, but the story of the day has nothing to do with what happened at Florham Park. Instead it’s talk about who wasn’t there and what hasn’t happened that has sucked the oxygen from any talk of excitement. Pretty standard for the Jets, but that’s part of the problem of course. Fans and reporters are wondering, “we thought things were supposed to be different now?” And things are definitely different, just not everything.

Let’s start this off by being very clear and direct. Zach Wilson, missing the first few days of training camp won’t play any part in determining whether he’ll have a good career or not. And regardless of how many practices he ends up missing everyone, except reporters, will forget he ever missed practice at all. In the grand scheme of things, missing a few practices will mean absolutely nothing. If you want to stress yourself out and think Wilson will risk missing more than a few practices, then by all means. Stress yourself all the way out. But much sooner than later, Wilson will sign and you’ll feel silly for all that self-inflicted stress.

Remember, Wilson already has his playbook. He went through mini-camp practices, has thrown with his receivers on their own time. He’s really not missing much (yet) that can’t be easily made up. Ease your mind with the knowledge that he is working out and studying the playbook on his own. The biggest problem with him not being here is who the backups are. But that’s also a problem even if he was here and it’ll continue to be a problem when he returns. It’s impossible to properly evaluate the rest of the offense with Mike White and James Morgan. How can we evaluate Denzel Mims when passes are sailing five-feet over his head? The Jets will workout Josh Johnson and Sean Mannion tomorrow, but you know the drill. They are available for a reason.

Still, cross your fingers and hope for Johnson. Johnson has familiarity with Mike LaFleur’s offense and is an upgrade over White and Morgan. At least with Johnson we can actually evaluate the receivers. Because all we got today was, Elijah Moore has a devastating cut move. And we only got that because it was a simple wide receiver screen.

Long term it’s not going to matter how many practices Wilson misses. But there is of course a tipping point where it could impact this season. That point isn’t today or tomorrow, but it’s somewhere around this weekend. Friday or Saturday seems reasonable and definitely by Monday (that’s when the pads come on). If this bleeds into a second week then yeah, that’s going to be a problem.

The Jets seem determined to dig firmly in their current stance, but there has to be a breaking point. Same applies to the Wilson side. At a certain point the payment schedule/offset language simply can’t be enough to not sign the second overall pick in the draft. And it can’t be the reason Wilson has to wait to live out his dream of being an NFL quarterback. If it gets to that point, both parties have to share that blame. Fortunately it’s still extremely unlikely to reach that point and soon enough you’ll be happily digesting all the reports of how Wilson looks in camp.

OTHER NEWS AND NOTES:

Wilson was the only player that kept the Jets from having a perfect attendance. The Jets are slow-playing Quinnen Williams’ return after foot surgery. They know what they have in him and don’t want to risk a different injury. Robert Saleh said Williams has started running and they are targeting a mid-August return. Ashtyn Davis and Vinny Curry could miss up to the first two weeks of the season. 81 of the 90 players have been vaccinated. George Fant tested positive for COVID and will have to quarantine for 10 days which means we’ll get to see more Morgan Moses. One little morsel to wet your palette for future excitement, Mekhi Becton and Alijah Vera-Tucker had no trouble clearing a wide open path for whoever was running behind them.