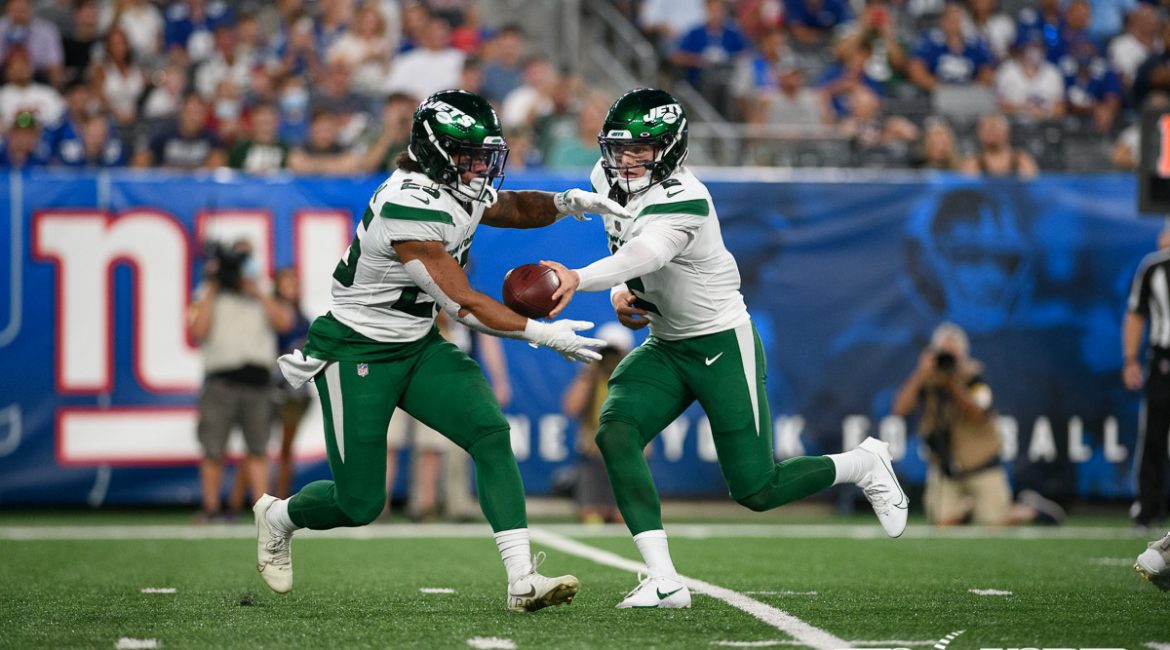 Okay, so that first week didn’t go very well. All things considered the second half was rather encouraging but that first half was an outright disaster. Most alarming was the inability of the offensive line to generate any type of push in the run game. The poor pass protection was to be expected, maybe not quite that bad but still, the awful run blocking was the surprise. According to the players and coaches poor communication was the main culprit behind the line’s performance. Of course there’s truth to that, but talent and ability, or lack thereof, played a part as well. The communication can improve throughout the season, the talent and ability part not so much at this point.

The good news is Offensive Coordinator Mike LaFleur eventually recognized the limitations of the offensive line and made some adjustments. Those adjustments are going to need to stay and continue to be tweaked just to give Zach Wilson a chance.

Which rookie QB gets the most help? – And by help mostly I mean protection. The running game and receivers as well. Even the defense, but which team can give their quarterback enough time to make plays? This wasn’t supposed to be a question, the answer should obviously be the Patriots but now Trent Brown won’t be able to play and the question must be asked. Mac Jones needs a clean pocket and time to work with. Sure, all quarterbacks need that to an extent but Mac Jones needs more of that than others. Can the Jets take advantage of Brown’s offense and apply pressure to the statuesque Jones? The Patriots will surely be able to pressure Wilson, will LaFleur be able scheme him up some space and time?

Control Field Position – That’s right, we’re talking field position in a Week 2 game. Two rookie quarterbacks squaring off against two defensive coaches, one of them being Bill Belichick, yeah we need to talk field position. This isn’t likely to bee a high scoring game, neither team has an explosive offense. The Patriots are designed to be more of a grind it out and rely on our defense kind of offense and the Jets offense is still a work in progress. Winning the field position battle is an integral part of Belichick’s strategy. It’s boring to talk about, but it’s absolutely going to impact the result.

Turnover Battle – I hate including turnovers in KEYS TO THE GAME because of course turnovers are the key to most games!! But this game has two rookie quarterbacks plus the Patriots lost last week because of a late-game fumble. So yeah, we need to talk turnovers. As previously mentioned the Patriots want to grind wins out. If in the process of grinding they open up a big, early lead they’ll take it but they’re grinding. The Jets want to be more explosive, but the Patriots defense might make that difficult. Then there’s the whole, Belichick vs. rookie quarterbacks thing. For the Jets to have any chance, Wilson has to avoid falling into any of Belichick’s traps.

I like the Patriots +6 here and I think Corey Davis over 4.5 receptions makes sense, but my favorite play of the day is James White receiving yards over. If you have White on your fantasy roster, play him. The Patriots want to thrive in the short passing game, so watch for him White to exploit the Jets linebackers enough to get 30 plus yards. Sit everyone else. Too few yards/points to be split by too many options.