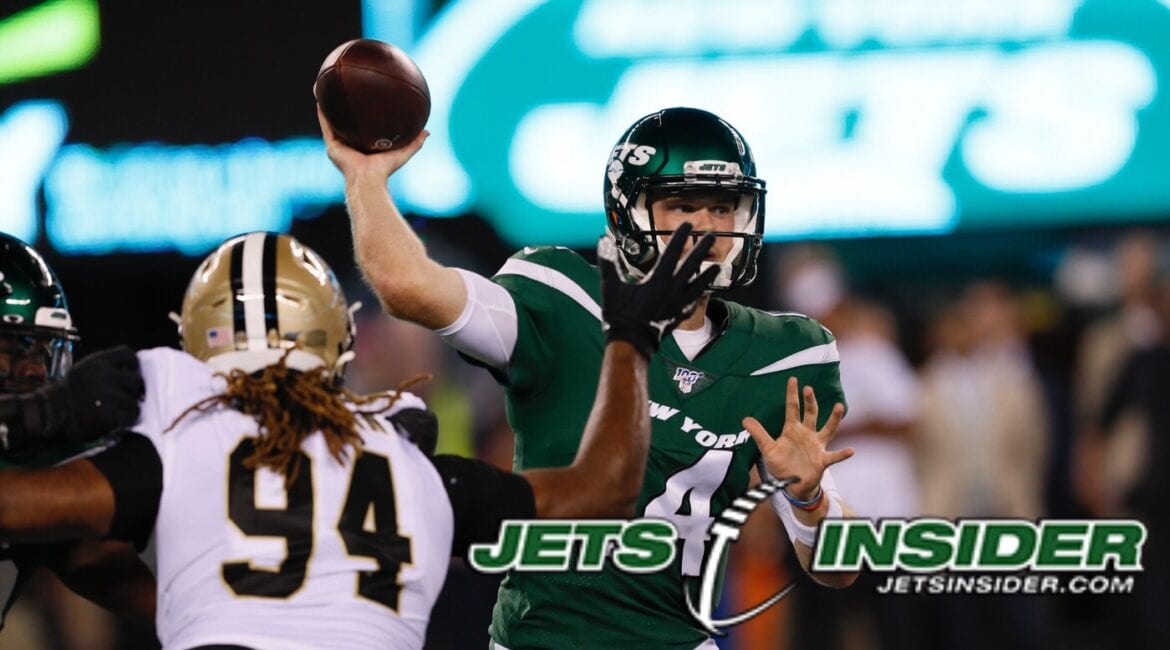 East Rutherford, NJ – The Jets lost to the Saints 28-13, but also won by avoiding any serious injuries. With only one more preseason game left to play the next time you will see Sam Darnold and the rest of the starters will be two weeks from tomorrow in a game that will count.

On the Saints first drive Drew Brees was able to casually stroll 72 yards downfield on eight plays and capped it off by finding Michael Thomas in the end zone. With Trumaine Johnson out, Tevaughn Campbell was covering Thomas and since you are smart fans you already knew poor Campbell had no chance on the play. The Jets responded to the Saints opening drive with a Ty Montgomery fumble which led to Teddy Bridgewater replacing Brees and a Saints field goal to go up 10-0.

Sam Darnold finished the game with 8-13 for 97 yards and ended with a touchdown on his fifth and final drive of the night. For the first four drives of the night the Saints defense bullied the Jets offensive line, which was missing three starters, and had Darnold under constant pressure. After Darnold led a seven-play, 65 yard touchdown drive Adam Gase decided he had seen enough and wisely got Darnold out of the game while he was still healthy.

“Actually we came out earlier (than we planned),” Gase said. “We wanted to play the whole first half. It just felt like after we scored the touchdown that it was the right time. Just kind of finish that group on a good note and kind of regroup.”

Darnold and the entire first-team offense were out of synch to start the game, partly due to missing so many offensive linemen and partly because of the Montgomery fumble, but Darnold was able to finally settle into a rhythm and his coach felt good about the way his night went/

“Early I thought he had a couple of good decisions and then there were a couple of decisions that we have to clean up,” Gase said. “The throw on the touchdown was really good. I mean sometimes he makes some of these throws and I’m not really sure how he completes them, but I thought there was a lot of good out of tonight.”

One thing Gase was not pleased with were all the penalties. There were 31 total penalties called between the two teams which made for a terrible viewing experience. The Jets were called for 15 of those penalties for 128 yards and Gase was visibly annoyed by all the yellow laundry on the field. The high penalty total is yet another thing that can be blamed on all the backups playing, but you can be sure that cleaning up those penalties will be a point of emphasis this week.

This was a dreadfully boring game to watch as it immediately became clear that due to the current offensive line and cornerback makeup that we weren’t going to be able to make any judgements based on this game. The only thing tonight showed is that Jets GM Joe Douglas has his work cut out for him as he will be scouring the waiver wire desperately looking to upgrade both positions.