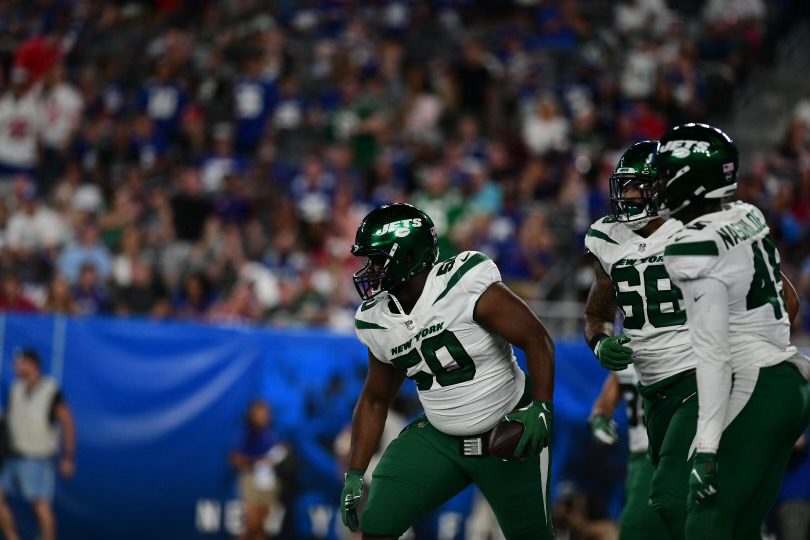 For this specific Snoopy Bowl, trophy or no, the Jets beat the Giants 12-7. It wasn’t the most entertaining game of football, but it was plenty competent from the Jets side. On his first NFL drive, Zach Wilson led the offense on a 12 play, 52 yard drive that gave the Jets a 3-0 lead. Wilson followed that up with a 10 play, 48 yard drive that stalled after a failed inside run on fourth and one. That failed run ended Wilson’s day along with the other starters. Wilson finished the night six for nine for 63 yards, no touchdowns, no sacks and no turnovers.

“He looked comfortable, especially on third down,” Robert Saleh said. “Made some good throws, directed the offense really well. Got in and out of the huddle. We moved it well for the first two series. It was a good first day.”

Comfortable is the word that kept jumping out watching Wilson play. It was far from perfect, but the rookie clearly looked comfortable. A large part of that comfort likely came from having a strong running game to lean on, but Wilson flashed the ability to supplement that running game. No need to set the world on fire yet. Just lean on the running game and build the passing attack off of that. That’s what you can expect this offense to do all season, so it’s a good way to start.

“It was awesome,” Wilson said about the running game. “I think it helps me out a lot. It slows down the pass rush a little bit. It gets those guys tired. We’re gashing them in the run game, momentum is on our side. It’s cool to see those guys, we kept saying in practice, ‘A, I can’t wait to see what that’s like in a real game.’ You can’t tell how our running back is going to handle something. It’s cool to see it finally come out and the guys put in the work and big holes, running backs gashing them. It was good to see.”

On the defensive side the Jets applied pressure early and often. It started with a sack by Bryce Huff and it continued with relentless effort and pressure. The Giants sat most of their starters, the Jets played most to start. Carl Lawson only got one drive, Wilson and the starting offensive line got two series. But it was just enough to give you a taste of what we’ve seen at training camp. This game looked very similar to those practices. The Wilson to Corey Davis connection was strong and productive. The Wilson to Keelan Cole connection just a touch less strong and productive. The offensive line cleared wide open lanes for running backs to break off chunk plays. And the defense held strong, applying pressure and having the guys cleanup on the backend.

Denzel Mims didn’t get any run with the first team offense, but when he got in later in the game he made those reps count. Three catches for 51 yards including a tough run after the catch, breaking multiple tackles, for a 20 yard gain.

“Well, I knew that it was coming to me based off the coverage,” Mims said. “I saw them dropping back and so all I was thinking was, ‘I just have to get the first down no matter what,’ so I tried to do that.”

Mims was also a contributor on special teams, taking on one of the gunner spots. Mims said he asked the coaches to give him more reps as a gunner, so he could show what he can do.

“Well they had me on the depth chart (on special teams), but I was at the bottom,” Mims said. “So I was like, give me a try. Let me show you what I can do. And I impressed them, so I’ve been moving with the ones.”