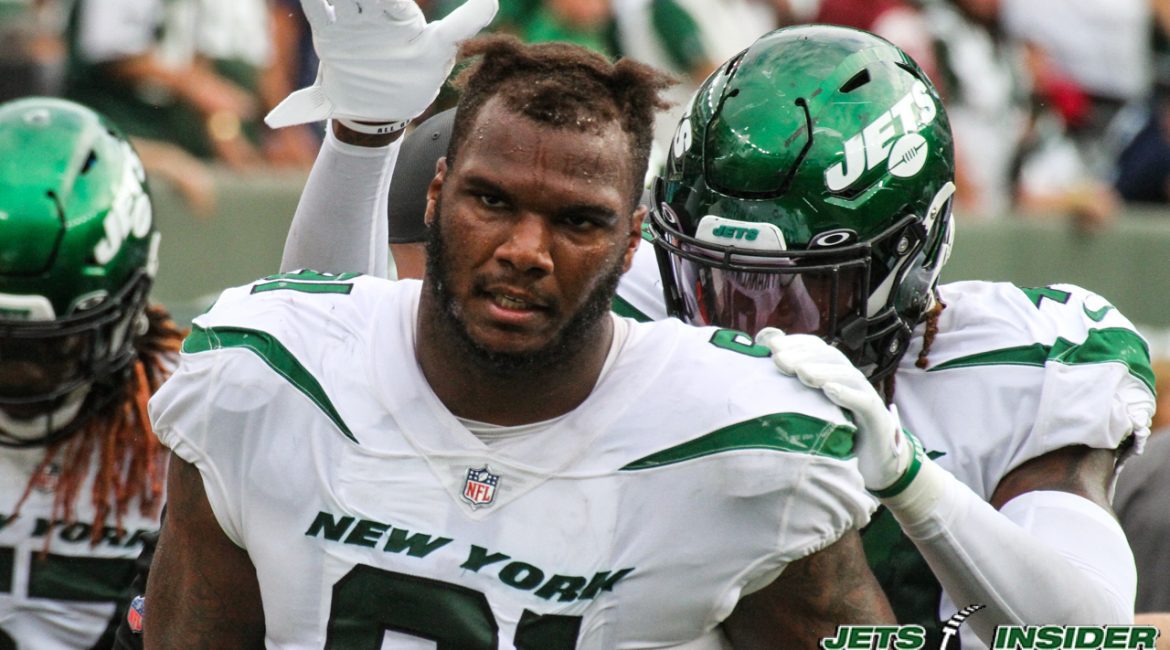 This past weekend, the Jets notched another win by defeating the Houston Texans by a score of 21-14. Zach Wilson played the part of the game manager, only throwing for 145 yards and running for the touchdown that gave the Jets the lead in the second half. It was the running game that led the way, as Tevin Coleman, Austin Walter, and Ty Johnson combined for 147 yards on the ground.

Yet, the true story of this game was the play of the Jets defense. Limiting Tyrod Taylor to 158 yards and only two touchdowns, the entire unit stepped up and had their best game since the seven sack performance against the Titans. It was an all-around effort from the defense, but John Franklin-Myers was the star of the show.

Franklin-Myers had two sacks on the day, a pass breakup, and an interception on the first drive of the game. After drawing criticism due to his late game penalty against the Dolphins, this was a dominant, and much needed, bounce-back performance. The performance was so good it had Robert Saleh declaring that Franklin-Myers is, “worth his weight in gold” to the team.

“He comes to practice every single day, he works his butt off and he’s working his tail off on game day. It was really cool for him to get the production he got, Saleh said.”

Franklin-Myers offered more insight into his mindset as a player and the importance of moving on from mistakes. “After it happened, understand that it couldn’t happen again. That was my mentality. You can’t make the same mistake twice, we preach that and we try to live that… I can’t slow myself down for stuff like that, I just have to be smarter,” said Franklin-Myers.

The defensive lineman made sure to credit the Jets’ secondary and defensive coaches for Sunday’s win. “They put a great plan together and now I think there’s no gray area for those guys. The coaches took it on themselves to make sure these guys are put in great positions and there were. Again, those guys just made plays. They were flying around, knocking people down, knocking the ball out,” said Franklin-Myers.

Although the Texans have a below-average offense in terms of talent and production, it is encouraging that the Jets defense was able to put together a solid game after a tough stretch of losing. Franklin-Myers’s performance was a positive as well after a string of underwhelming games since he signed his extension. The next game will be a test for this defense, as the Jets will take on the Eagles this Sunday. Philadelphia has a very strong rushing attack with their stable of running backs, while Jalen Hurts is an ultra-mobile quarterback who can easily evade pressure.

For the Jets to win this game, they will need their defensive line to step-up and shut down Hurts and the Eagles offensive attack. Franklin-Myers is a key cog for the Jets in that regard, and if he can perform at the same level of the Houston game, the Jets will have a much better shot to compete and win this Sunday.