JetsInsider.com > News > Blogs > Leaders of the Team: How Each of Jets’ 2021 Captains Earned Their Role

Leaders of the Team: How Each of Jets’ 2021 Captains Earned Their Role 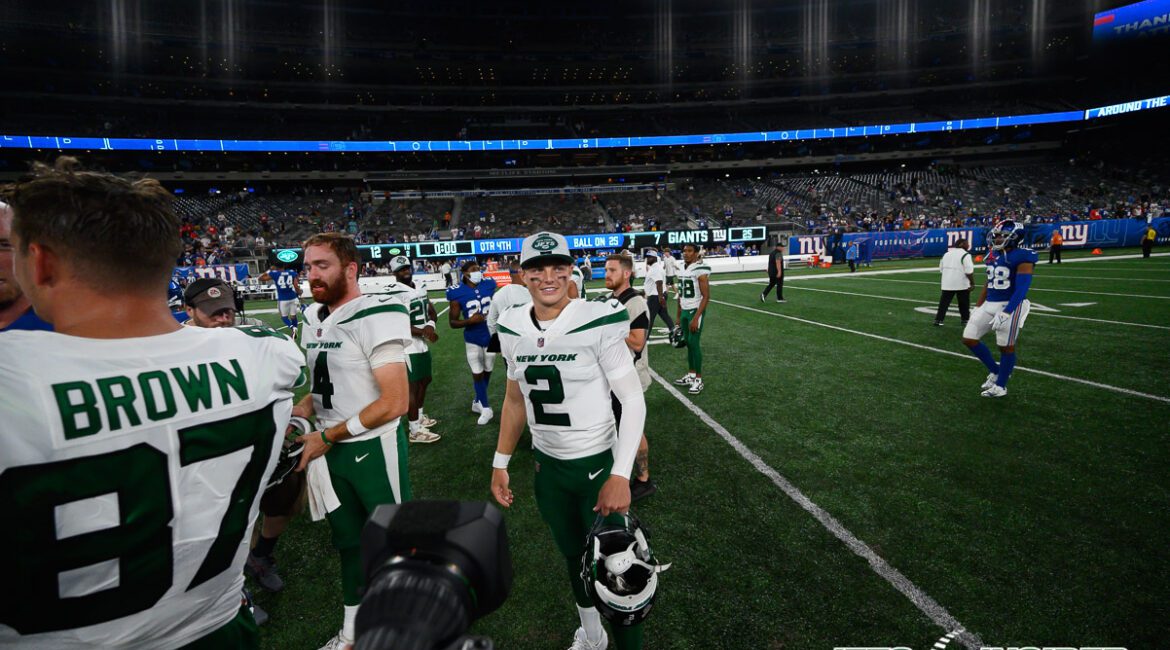 Throughout the preseason, the Jets have worked to establish new pieces alongside their returning players. With a revamped coaching staff and new schemes on both offense and defense, the team needed leaders to step up and set the tone for the upcoming season.

With the season beginning this Sunday, Head Coach Robert Saleh announced the five captains for the 2021 NFL season. Saleh said, “On offense, we have two of them, that’s Corey Davis and Zach Wilson. Then on defense it’s C.J Mosley and Foley (Fatukasi). Special teams is (Justin) Hardee and every week we’ll have one nomination from the coaching staff.” On the special teams side, Justin Hardee is meeting the expectations the team envisioned for him right off the bat. Hardee was signed to be the special teams ace where he thrived with the Saints, and his teammates voting him as a captain shows how much of an impact he has had on the team already.

Defensively, the duo of Fatukasi and Mosely embody the gritty and hard-working attitude that the team wants to implement. A former sixth-round draft pick in 2018, Fatukasi has developed into a productive run-stopping lineman over his three years in the league. In addition, he has grown into the leadership role that has been held by players like Steve McLendon; Fatukasi mentioned on August 9th that McLendon has been “a tremendous friend, mentor, brother” to him on and off the field. With Fatukasi embedding the mentality of the former defensive lineman, it is not a surprise that his teammates saw him as one off the main leaders of the team.

The other defensive captain, C.J. Mosley, is viewed by Defensive Coordinator Jeff Ulbrich as “even keeled” and a “source of experience” for the younger players. “He’s a great source of consistency and just the demeanor I think is calming to these guys. They’re going to lean on him Sunday, for sure,” said Ulbrich. Saleh emphasized Ulbrich’s comments, saying how Mosley’s presence will help the younger linebackers thrive. He added that the staff is “excited about that young group, that linebacker group” and that Mosley will only add to the unit. Mosley himself is excited for the “new chapter” that begins on Sunday. “It’s exciting to be back on the field, exciting to compete, and get off on the right start,” said Mosley.

On the offensive side, two newcomers in Corey Davis and Zach Wilson have gained the respect and trust of teammates to a point where they are seen as leaders. Davis said that “it’s amazing” to be named a captain of the team in his first year. “Having these players vote me in to be captain, it speaks volumes. They have a lot of trust in me, a lot of confidence in me, so it feels good man. Gotta lead these boys and I’m ready for it,” Davis said. Davis also said it means a lot that his teammates trusted him as captain, and that it is a “challenge’ he is ready for.

In addition to his teammates, the coaching staff is very excited about what Davis will bring to the offense. Saleh said he could “gush” about Davis and that the free-agent wide receiver has been everything they have expected. “From a coach’s standpoint, when you draw up a player, you can’t draw it up better for him with his mindset, the way he prepares every day, the way he goes about his business, the way he talks to teammates, the way he takes care of himself. Then you go on the field, he’s on his job, every single detail. He’s deliberate in every single thing that he does. And then, on top of it, he’s pretty damn good at what he does too,” said Saleh.

The other offensive captain may be the most exciting one, as Zach Wilson’s selection as captain is another stepping stone in his development. Saleh stated that Wilson’s new captain status is “more of a testament to him and the way he’s been able to conduct himself here,” and that he has an “infectious” personality. Offensive Coordinator Mike LaFleur elaborated on Wilson’s mindset and preparation, saying how it is not “rookie-like”. “He wants as much information as possible , that’s what we’ve always said since April. But also, just not even information about scheme, about process of just getting through a week, how to study, he asks so many questions that are just awesome questions and it’s been fun to watch him go through this week and last week as well,” said Lafleur.

For Wilson himself, he views being voted captain as a “honor” and a role he needs to take seriously. Wilson also specified that he is working to build personal connections with his teammates off the field. ” You want to be somebody that actually gets to know them and understands their background, where they came from, and so I think that’s super important,” said Wilson.

The five captains the Jets selected evidently have done enough on and off the field to solidify themselves as team leaders. Whether it is the veteran Mosley or the rookie Wilson, each guy has stood out enough to the players to have the ability to wear the “C” patch on their jerseys. With the captains solidified for Week 1, it is time for the Jets to prove that their team is ready to compete. It is on the captains to steer the ship in the right direction, and a showdown with the Panthers is the first step in the Jets’ quest to right their ship.