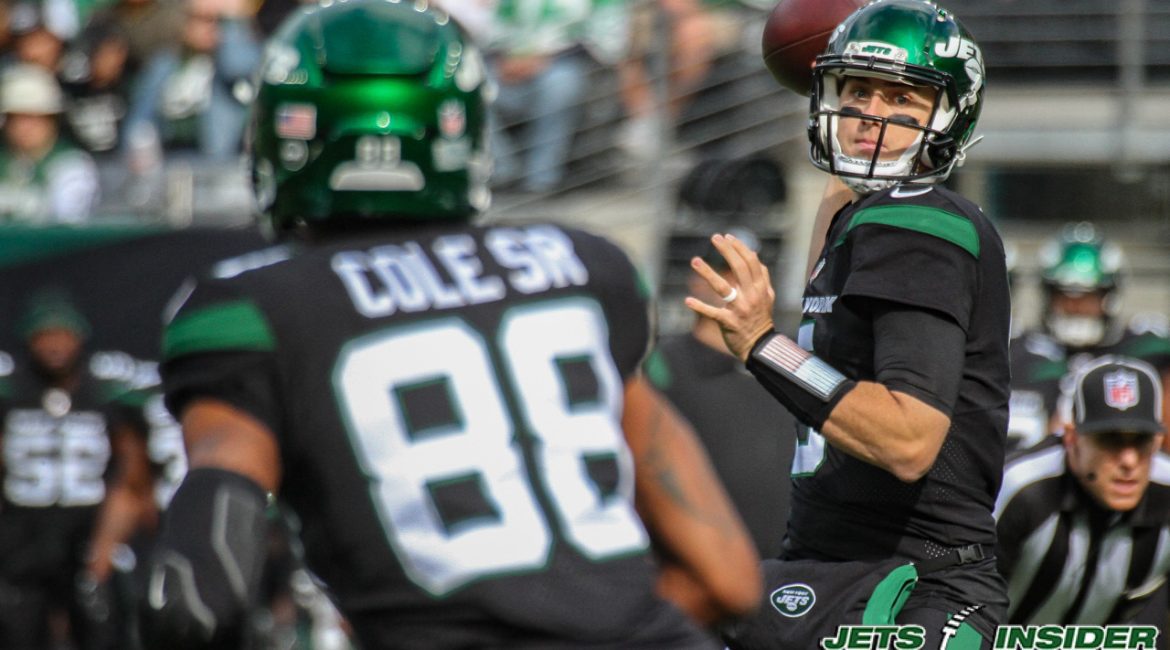 EAST RUTHERFORD, NJ- We all owe Ty Johnson an apology. He was right. And we laughed at him. Laughed in his face. But he was right. Mike White really is a stud. Come on now, indeed.

37-45 (82.22 %) for 405 yards, three touchdowns, two interceptions and a catch for a two-point conversion. That wasn’t Joe Burrow’s stat line, that was Mike White’s stat line. And those two interceptions were mostly bad luck. From the opening drive Mike White had this offense humming. For the first time this season the Jets scored in the first quarter, on the first drive. And for the first time in over two decades a Jets quarterback threw for over 400 yards. That last quarterback was Vinny Testaverde in the year 2000.

Mike LaFleur had been calling plays from the sideline so he could talk through things with his rookie quarterback on the sidelines but with White starting LaFleur headed up to the press box. The results speak for themselves. LaFleur needs to stay in the press box from here on out. Play-callers can always get a better feel for how a game is unfolding from above, but the biggest difference in the game-plan today was the quarterback executed and able to get the entire offense in a rhythm. This isn’t a long-term criticism of Zach Wilson, there’s still hope that he will be able to do the same thing with an even higher upside, but at this moment in time Wilson isn’t there yet.

The Jets opened the game with a 10-play, 75-yard drive that took six minutes and twenty-two seconds. The first five plays were passes, all of them short. All of them play-action. Short right, short right, short middle twice and back to short right. The quarterback executed, the short passing game opened up the defense and Michael Carter finished the drive off with an eight-yard-touchdown.

The Bengals bounced back and appeared to seize control of the game, but it was the Jets who came up with the game-changing turnover. And it was the Jets who benefited from a ridiculous, nonsensical penalty that never should’ve been called. After 17 fourth quarter points the Jets were able to hold off the Bengals. Burrow finished the day with only 259 yards and the Jets managed to hold Ja’Marr Chase to only two catches for 32 yards. Tee Higgins (four catches for 97 yards) and Tyler Boyd (five catches for 69 yards and a touchdown) got the Bengals back in the game, but it was Shaq Lawson’s interception that got the Jets in position to end it.

Mike White executed the plays as asked and Michael Carter took over from there. Jamison Crowder chipped in eight catches for 84 yards, Ty Johnson five catches for 71 and four carries for 15. Elijah Moore had six catches for 67 yards, but it was Carter who carried the load. Carter rushed for 77 yards on 15 carries and hauled in nine catches for 95 yards.

Now the Jets just need to find a way to bottle this all up and take it Indianapolis with them for Thursday.