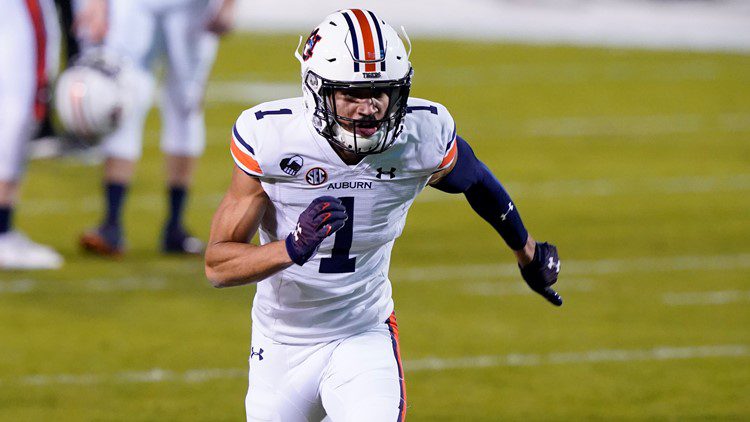 So you may have heard, but there’s a draft coming up. A lot of the focus is going to be on surrounding alleged #2 pick Zach Wilson with the talent he needs to grow and develop unlike that last guy…Sean? Steve? I’m blanking on his name. In any case, when building around quarterbacks, the discussion is invariably going to turn to wide receivers where the Jets are…in surprisingly decent shape????

Not that they’re totally set at the receiver position, but the additions of solid veterans like Corey Davis & Keelan Cole along with the assumed progression of Denzel Mims will give Zach Wilson a better group of pass catchers than Darnold or Geno ever had. This gives the Jets a degree of flexibility heading into draft night: will they look to secure a future #1 type receiver (something they might still lack) in the first round? Or are they confident enough in their current platoon of wideouts that they’ll look to supplement it with role players on Days 2 & 3 of the draft?

I’m going to take a very brief look at which receivers the Jets could potentially target on each day of the draft who I think may fit them the best. Keep in mind, I’m not an insider and I don’t know where any of these players are going to be selected. I’m merely positing which day I believe they should go based on my subjective evaluations of their talent.

The top of this receiver class has a whole host of players that have the potential to blossom into a true #1 wideout. There are probably a lot of fans out there that don’t see a need to invest an early draft pick at the receiver position but the mentality that every pick needs to address an immediate or pressing need is misguided. If the Jets always drafted for exclusively for need, they probably would’ve passed on Quinnen Williams in 2019, who is currently a cornerstone player. While the Jets aren’t in desperate need of a true #1 receiver right now, they still have the luxury of drafting someone high and allowing him to hopefully grow into that role behind Davis, Mims, and Keelan Cole. You know…the way most successful franchises operate.

Any one of Jamar Chase, Jaylen Waddle, or Devonta Smith would be great gets for the Jets, but the only premium talent who really has a reasonable shot of falling to the 23rd pick is Rashod Bateman. Maybe the most well rounded receiver in the entire class, Bateman is a terrific route runner with awesome hands and underrated quickness.

His once soaring stock has taken a tumble as of late, as it was revealed at his Pro Day that Bateman had committed the cardinal sin that has ensnared so many men on Tinder: he may have exaggerated his height just a tad. However unlike men on Tinder, he’s still a terrific prospect despite being smaller than advertised. When trying to project receivers, always bet on route running to translate. Bateman has drawn some comparisons to Keenan Allen but I could also see him settling in as a Calvin Ridley type player if he doesn’t hit that lofty ceiling. It isn’t an immediate need, but adding Bateman at #23 would give the Jets one of the deepest receiver corps in the entire league one year removed from having perhaps its worst.

Now, if we’re talking about what the Jets need right now, there are a number of receiver prospects that fit with the Jets roster construction that can be found later in the draft. Presently, the Jets have a lot of size and contested catch ability at both outside receiver spots but the receiver room sorely lacks a jolt of electricity. A guy who can win with speed and turn designed touches into house calls. They aren’t every going to be the main focal point of an offense, but they provide a dimension the Jets offense has lacked for years.

You might’ve heard of this one. A lot of analysts are comparing Toney to the scintillating Percy Harvin, but my personal player comp is to the greased-up-deaf-man from Family Guy. Nobody can catch him. He can outrun the defenders or juke them out of their cleats, and the ones lucky enough to lay a hand on him seem to slide right off.

Toney’s unbelievable talent to turn routine touches into spectacular plays is rare, and the Jets would probably have to burn a high draft pick to get him. However, if they do, he would add a dynamic to their offense that they are sorely missing.

Like Toney, Rondale Moore is an absolute terror after the catch. The difference is: Toney has the length of a more prototypical receiver (5’11”) while Moore is a mere 5’9”. The trade off? Moore is thick and compact and is even faster than Toney; he ran the 40 yard dash in a blazing 4.29 seconds at his Pro Day. He also should hear his name called very early on in the draft, likely in the second round.

Brown is just as Dyami-c as Toney and Moore, but he’s a different archetype of receiver. Unlike them, Brown does most of his damage before the catch, stretching the field vertically on deep balls. He beats the corner so badly here that he could’ve called for a fair catch.

I actually think Brown could potentially develop into a very good all-around player, but he should get snaps early in his career for his ability to take the top off a defense (perhaps the one area the Jets were hurt when they moved on from Breshad Perriman).

4.26. That’s it. That’s the scouting report. Anthony Schwartz can run 40 yards in 4.26 seconds. He’s an olympic caliber sprinter and he can run very fast. Can he do anything else? Not really! But with established starters at every receiver position, the Jets wouldn’t really need him to do anything other than run fast while he learns the nuance of the position.

Here’s a little stick of dynamite who can give you the same shot of nitro in a smaller, fun-sized package. I first noticed Tutu when I was watching tape on Mehki Becton in 2020. I saw a guy with undeniable speed who the defense couldn’t seem to stay in front of. The problem is that he has the physique of a Rice Crispy elf and hands made out of Rice Crispy wrappers, which in spite of their sticky properties, led to a fair number of drops. If he can stay healthy (he’s only 160 lbs!) and clean up the drops, there is a dangerous and highly useful weapon inside Tutu Atwell. He could end up offering tremendous value to some team later on in the draft.