JetsInsider.com > News > Blogs > Braxton Berrios Is Proving His Worth for This Season and Beyond 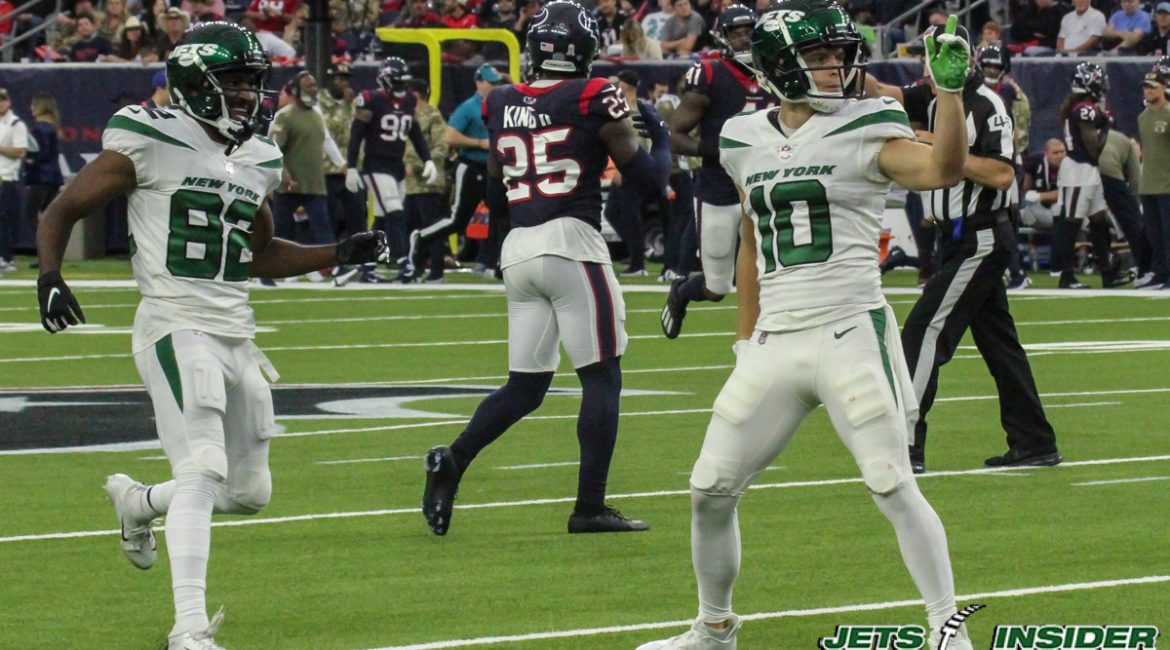 In a closer-than expected game, the Jets narrowly lost this Sunday to the Tampa Bay Buccaneers by a score of 28-24. Tom Brady showed why he is considered by many to be the GOAT at the quarterback position, leading Tampa 93 yards on their final touchdown drive while throwing to receivers like Tyler Johnson and Cyril Grayson. Despite Brady throwing for 410 yards, the Jets defense managed to slow down Tampa enough to hold a lead into the fourth quarter. Bryce Hall played solid against the likes of Mike Evans and pre-meltdown Antonio Brown, while Michael Carter II recorded his first career sack in a key spot. Brandin Echols also recorded a key interception on Brady in the game.

Despite the defense keeping Brady at bay for the majority of the game, the offense was actually the more impressive unit. Despite being down multiple playmakers and losing George Fant and Michael Carter mid-game, Zach Wilson put together one of his most impressive performances of the season. The rookie completed 19 of 33 passes for 234 yards and a touchdown. And maybe most importantly, no interceptions for the fourth straight game. Most impressively, Wilson was sharp and decisive throughout all four quarters of the game. The rookie consistently found open receivers and fit throws into windows only a select few number of quarterbacks could make.

But this article isn’t about Zach Wilson or the defense. No, this article is about the newest fan-favorite/Jets fan sweetheart because Wilson’s exciting performance simply would not have been possible without Braxton Berrios. The receiver had eight receptions for 65 yards and a touchdown, while adding 12 yards and another touchdown on the ground. Berrios has consistently used his athleticism to get open and showed a consistent connection with Zach Wilson that has led to continued success.

Over the past four games Berrios has 20 receptions for 180 yards, a receiving touchdown, two rushing touchdowns, and a 102 yard kick return touchdown. In addition, Berrios is the fourth-highest graded WR in the NFL since Week 12, having a grade of 87.3.

The coaching staff of the Jets has realized the talent of Berrios as well, as Offensive Coordinator Mike LaFleur has consistently schemed touches for him. A major example of this was Berrios’s rushing touchdown, as he received the ball on a reverse and had the option to run for the touchdown or show the ball to Zach Wilson on a pass. A less successful version of this was the controversial fourth-and-two late in the fourth quarter. According to Robert Saleh, the play had “poor communication” in terms of how it was supposed to be ran. “The quarterback has an option based upon the look that he has to sneak the ball. In that situation, we wanted the ball handed off to Berrios… Braxton is one of our best players and we wanted the ball in his hands. We just didn’t communicate it the way we needed to across the board,” said Saleh.

The coaching staff trusting Berrios as their main weapon in the Jets offense cannot be understated. The receiver out of Miami has been their only real playmaker since Elijah Moore got hurt. Denzel Mims and Keelan Cole have been massive disappointments, allowing Berrios to step up and fill the role as Wilson’s go-to target. His presence has extended drives, given defenses something to think about and opened things up for Wilson to actually move the offense downfield.

As a result of his recent performances, Berrios may have played himself into a very nice payday. Berrios has proven that he is more than a return specialist, as the receiver has shown playmaking ability and good route-running. With the Jets having Corey Davis and Elijah Moore returning next year, the team has been predicted to add another receiver in the draft and completely overhaul their tight end room through free agency and the draft. Even with these additions, Berrios is not someone the Jets can afford to lose this offseason. A potential core of Davis, Moore, Berrios, Jameson Williams, and Dalton Schultz would make Wilson’s life much easier as a quarterback.