The Elijah Moore Show is Just Getting Started 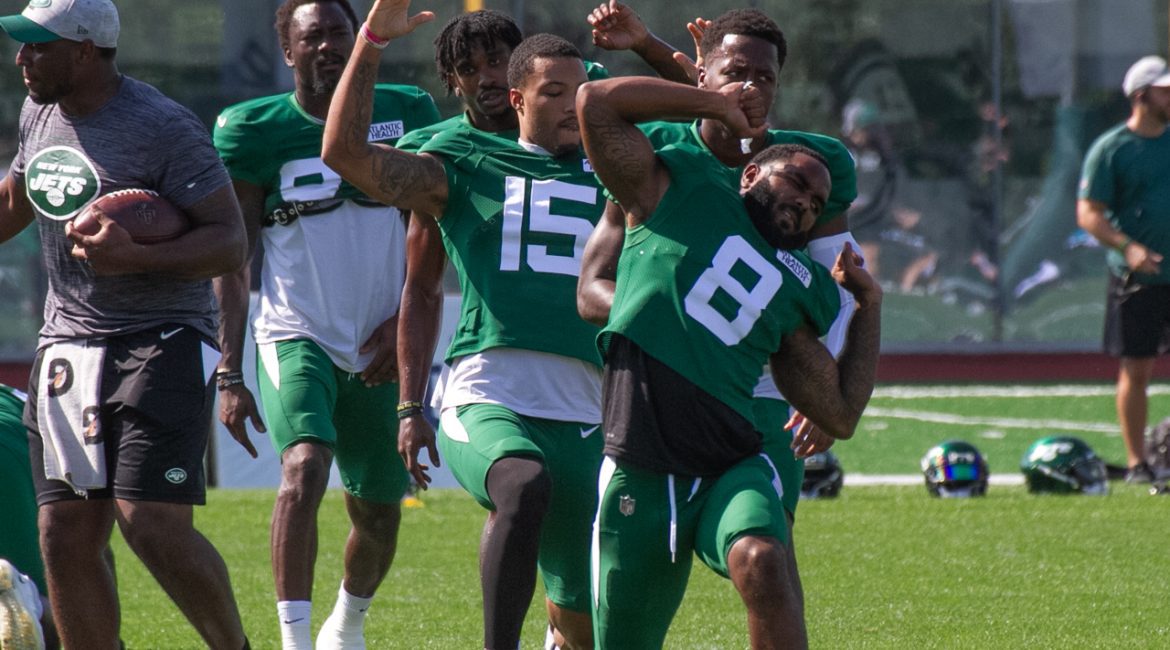 Last Sunday, the Jets suffered a defeat to the Dolphins to drop them to a record of 2-8 on the season. Losing only by a score of 24-17, the Jets were competitive in this game and avoided giving up over 30 points for the fifth straight game. Yet, the Jets had an opportunity to win the game if not for a few sloppy mistakes. A roughing the passer call on John-Franklin Myers and a blown coverage by Ashtyn Davis that led to a TD both were some of the mistakes that cost the Jets this game.

On offense, Joe Flacco played a game that fits his current reputation of the experienced veteran quarterback. Flacco finished the game, 24-39 for 291 yards and two touchdowns, averaging 12.1 yards per completion. He did enough to keep the team in the game, handling the Dolphins’ blitz heavy scheme well and hitting throws at all three levels of the field.

Yet, the main star of the Jets offense on Sunday was Elijah Moore. The rookie WR totaled 141 yards on eight receptions with a touchdown while 15 yards on the ground. Moore was consistently fed the ball, beating defenders like Xavien Howard and Byron Jones on the majority of his routes. Moore’s touchdown came on a 62 yard pass where he beat his defender off the line of scrimmage and outran the entire Miami defense. This past performance has continued a stretch for Moore where he has 366 receiving yards, four touchdowns, and 126 yards after catch.

“He’s starting to get into a rhythm,” Robert Salah said. “He had the explosive play which we all know that he is capable of. He’s stacking up days. He’s only going to get better. He’s going to be a special kid.”

In light of his recent success and praise from teammates and coaches, Moore is still focused on continuing to get better each week. “The more games I get, the more comfortable I feel like I’m getting. I don’t feel like a rookie,” said Moore. Moore added that he “focuses” on himself during games, not concerning himself with who is lined up across from him at the cornerback position.

Moore’s emergence had all the early signs of occurring back in training camp, as the receiver was dominating everyone in front of him. After being slowed by an injury that prevented him from suiting up in preseason games, Moore had to use the first few weeks of the season to catch up on reps he missed. But with his feet firmly under him, Moore is showing the talent that many felt would make him the Jets best wide receiver.

Adding to a draft class that includes stand-out performers like Alijah Vera-Tucker and Michael Carter, Moore has a chance to be a cornerstone of the Jets offense for years to come. His overall athleticism and talent as a player is something the Jets have lacked for years. With Zach Wilson projected to return this week, Moore will have a shot to prove that he can continue his hot streak with the Jets presumed future at the quarterback position. If Moore can continue his production and help Wilson gain his footing over the rest of the season, he has the potential to be the main playmaker of an emerging Jets offense.