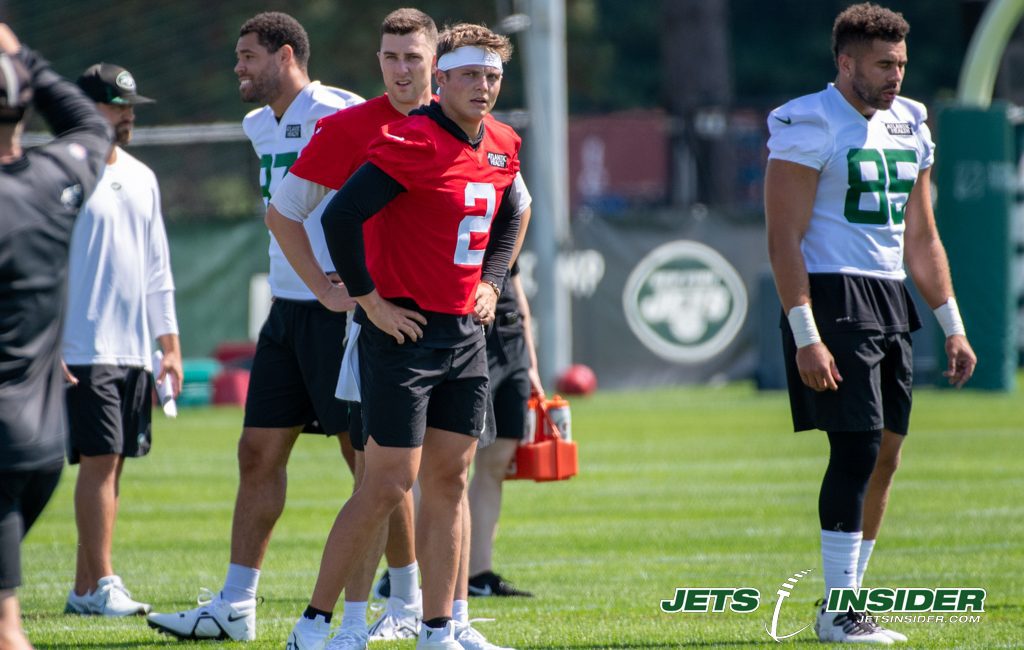 It was a tale of two sides of the ball in the Jets’ loss to the Patriots on Sunday.

The Jets were led by their defensive line and sacked Mac Jones six times. Between Quinnen Williams, Carl Lawson, and John Franklin-Myers, the Jets controlled the trenches against the Patriots’ offense. C.J Mosley’s linebacker play was vital in the middle of the field, registering seven total tackles and two assisted tackles. Sauce Garnder looked elite in coverage once again and almost had a game-changing fumble recovery early in the game.

In total, the Jets held the Patriots to three points for most of the game. Despite missed tackles and giving up yards in the running and short-passing games, the Jets’ defense held firm. They limited the Patriots to field goal attempts and did not let them score an offensive touchdown during the game.

As good as the defensive performance was, the team’s offensive performance was just as poor. Completely sputtering against a solid Patriots defense, the team managed just 103 (!!) total yards of offense. The running game was non-existent, as Ty Johnson, Michael Carter, and James Robinson could not find holes or break many tackles. Blocking was not good on the ground as well, as the Patriots got penetration on just about every designed handoff the Jets ran.

Regarding playcalling, offensive coordinator Mike LaFleur did not have a good game either. He had questionable decisions, such as sticking with the non-existent run game or calling pass plays on 3rd and shorts. He also utilized certain players in interesting situations, such as using Ty Johnson on a wheel route and Denzel Mims on a swing pass.

This inability to complete the simple passes hamstrung the playcalling of the offense. With Wilson shaken and erratic, LaFleur had no choice but to stick with simple routes and concepts while also using the run game. Combine these factors together, along with poor run blocking, and you get a conservative game plan with a quarterback that struggles to complete the easy passes.

It was a performance that, similar to the first game against New England this season, raised questions about the progress of the second-year quarterback. A mostly average performance at quarterback would have won the Jets this game; instead, the bottom dropped out, and the Jets spoiled an impressive defensive performance.

Yet, Wilson was not quick to take accountability after the game. When asked if the offense let down the defense at all, the second-year quarterback responded with a simple “No.” In Wilson’s case, it added to an already poor day at the office and raised more questions about his development in year two.

On the other hand, Head Coach Robert Saleh called the offense’s second-half performance “dog sh*t.” He also spoke about the nature of the loss on Sunday.

“To me, whether we lose by one or a hundred, it doesn’t matter. They’re all gut punches. It’s a loss. Yeah, it’s crappy way to lose. You feel like you’re exchanging blows from a defensive standpoint from both teams and somebody could just make a play and get it to overtime. They made a play and we didn’t.”

Despite the heartbreaking loss, the Jets are still 6-4 and very much in the thick of the AFC Playoff Picture. They have all winnable games remaining on their schedule, most of which are favorable matchups for their elite defense.

Fantastic defensive performances will not matter, though, if the Jets’ offense cannot find consistency down the stretch.

Wilson and the offense can either steady the Jets’ season or completely sink it. If the offense can find its footing, there are not many games that this team will lose the rest of the season. But if the offense, specifically Wilson, has more games like this Sunday, the Jets will most likely be on the outside of the playoffs again.