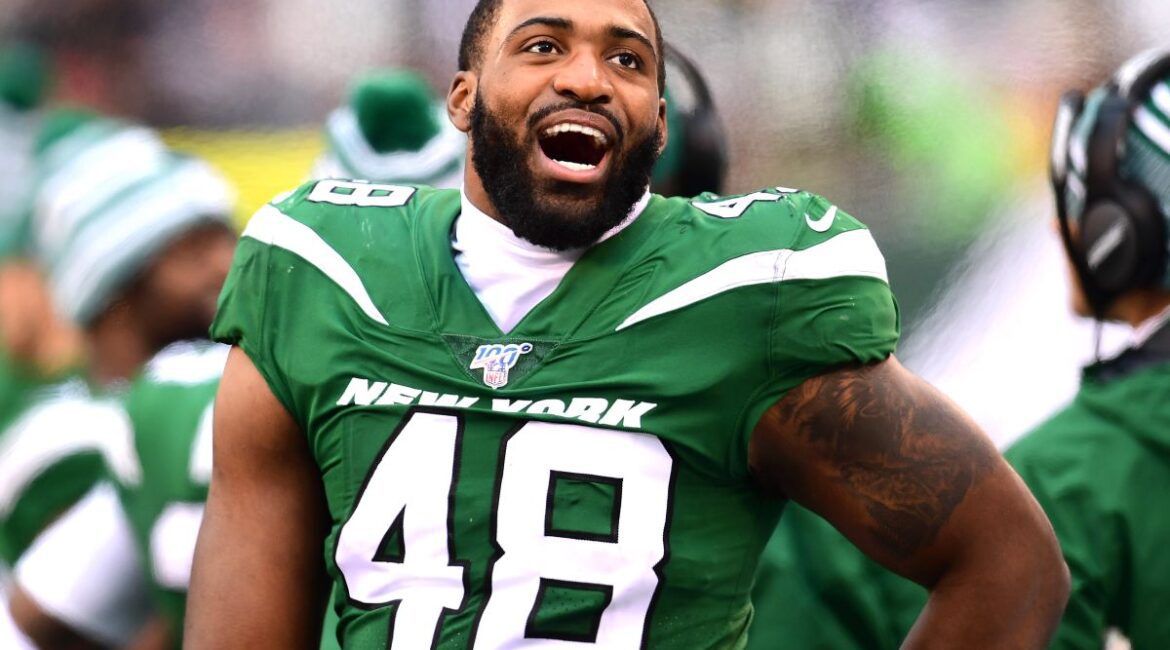 Full pads were on today and it felt like football. We got perfect weather for football practice, overcast and gloomy. Some drizzles of rain, the sun tucked away behind the clouds but the only thunder like sounds came from players in pads hitting other players in pads.

You could sense the shift in energy from the players, the chirping has gotten louder and you can feel the intensity in how badly players are trying to win every single rep. All of that is the real sign that real-live football is right around the corner.

JORDAN JENKINS CONTINUES TO PICK ON THE ROOKIE WHILE HE CAN

Mekhi Becton had a solid overall day in team drills, but Jordan Jenkins once again reached into his veteran bag to win some reps against the rookie left tackle. In one-on-one drills Jenkins was able to bend around the edge of Becton on the first rep. On the second rep Becton adjusted, had Jenkins stopped dead in his tracks until Jenkins went to a rip and pull counter that Becton’s hands simple weren’t expecting. Becton had Jenkins stuck, his hands had full control of Jenkins until Jenkins hit him with that counter.

These losses will create future wins as long as Becton can learn from and build on these rookie mistakes. When Becton wins a rep against Jenkins it’s because of his size and ability, when Jenkins wins reps it’s all veteran savviness. Becton is getting a crash-course in different pass-rush techniques, Jenkins is showing him a bit of everything so far. All of this will help prepare the rookie for what he will see all season long. Becton will see a wide variety of moves during the season, and from players more talented and skilled than Jenkins, so it’s vital that Becton can see as many of these looks as possible and be ready for them when they come.

Kyle Phillips is a 6’4″ 277-pound defensive lineman. La’Mical Perine is 5’11” 216-pound running back. Yet, when Perine took off down the sideline on a wheel route, with Phillips tasked with covering the running back, somehow Phillips was able to stick with Perine step for step. Phillips not only stuck with Perine the entire way downfield, but he properly walled him off so the back had no chance to make a play on the ball.

It looked crazy. It didn’t even make sense. You rarely see cornerbacks and safeties execute defending a wheel route so perfectly, but here was a big ol’ defensive lineman providing textbook coverage. It starts to make a bit more sense when you remember Phillips ran 4.68 40-yard-dash at the combine, Perine 4.62, but all that did was impress me all over again.

Sam Darnold had another good day of throwing the ball. He continues to show his command of this offense but it was his two worst throws of the day that I want to focus on here. Because as off as the throws were they were still completed and they came on back-to-back plays. First Darnold threw a back-shoulder throw to Herndon for about 10-15 yards, the throw was way too far behind that back shoulder of Herndon, but somehow Herndon was able to contort his body to make a ridiculous diving catch. Then on the very next play Darnold saw Travis Wesco open across the middle of the field and put the ball too far out in front yet Wesco was able to extend just enough to make another diving catch.

Breshad Perriman was able to take a short slant to the house for a long touchdown today, Jeff Smith made a couple of nice plays and George Campbell won a handful of impressive reps with the backups today, but regardless of the state of the receiving core, Darnold and this offense are going to need these tight ends to make plays exactly like those two. Receiving targets can’t always expect a perfect ball and this Jets offense isn’t talented enough to be able to brush off every incompletion on a non-perfect throw, sometimes the target needs to bail out the quarterback and that’s exactly what happened today.

Herndon has that ability, he can do that consistently if he can just stay on the field. Wesco far less so, but it is there. The Jets and their fans are going to ask Darnold to elevate his play and in turn elevate the play of his teammates, but every once in awhile he’s going to need these guys to elevate him with plays like they did today.

Jets Still Not Ready Lose 31 13 To 49Ers,Ricky Sapps Road To Redemption,Morning After Report Mid Term Exams,Quinnen Williams Is A Pass Rusher,Jets Select Blake Cashman In The Fifth Round Of The Draft,Light Practice In New Jersey,Jets Defense Cant Beat Around Bush,Jets D Stepping Up At Right Time,Jetsinsiders Inside The Tailgate Experience,The Quarterback Competition On The Defensive Side