JetsInsider.com > News > Blogs > All Around Effort Leads Jets to 21-14 Win Over Texans 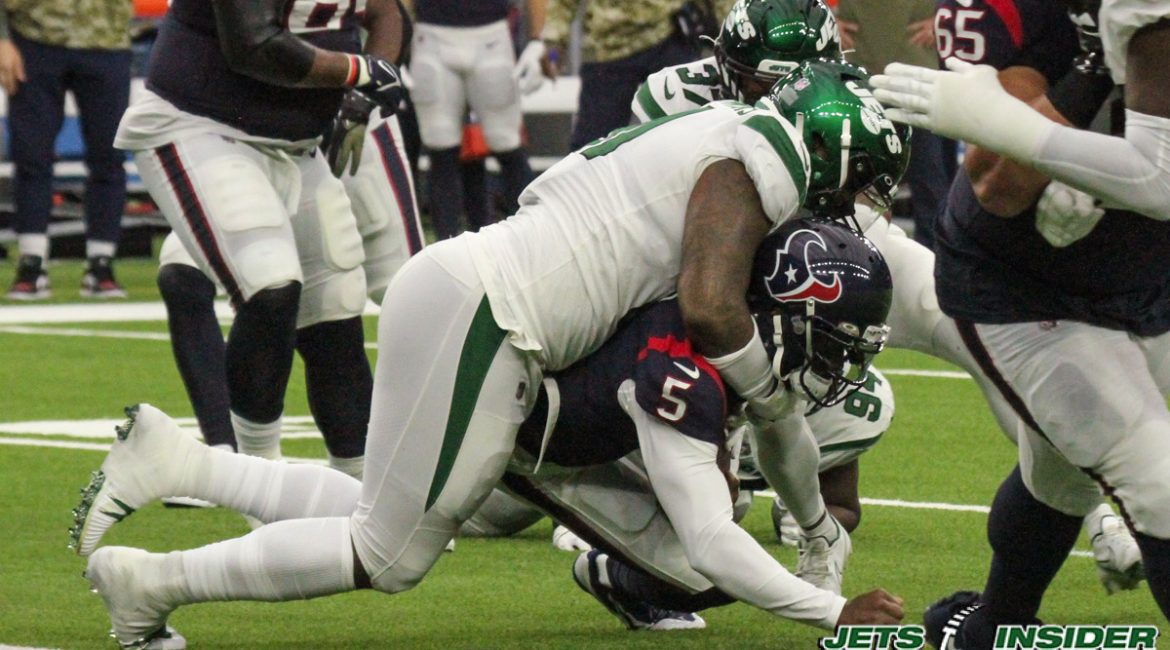 It took a total team effort to pull it off but the Jets won their third game of the season, 21-14. Zach Wilson struggled mightily in the first half as Tyrod Taylor led the Texans to an early 14-3 lead before the Jets defense shut Taylor and the Texans down. Wilson was able to settle down as the offense found their groove on the ground, rallying off 18 straight points to close the game out.

The Texans first touchdown came after a boneheaded, rookie mistake. Facing pressure on a third-and-17 play, Wilson tried to do too much and panic-flicked the ball to Ty Johnson who had his head turned ready to block. A lucky bounce later and the Texans capitalized with a quick touchdown only to force a three-and-out and capitalize with another touchdown. After that, the Texans couldn’t get anything going.

“Yeah, even in that first half, I thought we were playing very well,” Robert Saleh said. “There were two third downs that I know we all want back, especially third and longs. The zero that resulted in the touchdown and the Go ball. Aside from those two plays, I thought the guys showed a lot of resilience. I thought there was a sudden change out there in the second half where we knocked them out of field goal range. I thought they were fantastic.”

“Just rushing together. I think you kind of see some guys on film, when they go against a running quarterback, just kind of don’t rush or get timid rushing, stuff like that. Again, we just rush,” Franklin-Myers said. “We play off each other, we play together well. We kind of know what each other is going to do. That helps us out when we play a guy like this because we’re all over the place, we’re playing off each other and making plays.”

As Wilson struggled on the offensive side, Mike LaFleur adjusted his play-calling accordingly to the tune of 157 rushing yards on 34 carries (4.6 ypc). Tevin Coleman had 67 yards on 16 carries and Johnson added 42 yards on six carries. Elijah Moore chipped in seven yards on one game-clinching carry and Zach Wilson had a gutsy touchdown run himself. But the star of the day, was Austin Walter. Walter had an impressive training camp with the Jets before some preseason fumbles had him off the roster. But today he got a chance to suit up and in his hometown of Houston to give the Jets offense the spark they needed. 38 yards on nine carries and a touchdown right before the half to cut the Texans lead to 14-11.

“There’ve been a lot of emotions that I’ve been feeling. I’m from Houston. I went to Rice University. I went to Crosby High School, so this was a homecoming for me,” Walter said. “I got to see a lot of family members here, some people that I wasn’t even expecting to see that work in the stadium. Just being here my whole life, it meant a lot for this to be the place to get my first career touchdown. I know my dad is in heaven smiling down on me, so a lot of emotions, but they’re bittersweet emotions.”