JetsInsider.com > News > Blogs > All I Want For Christmas

All I Want For Christmas 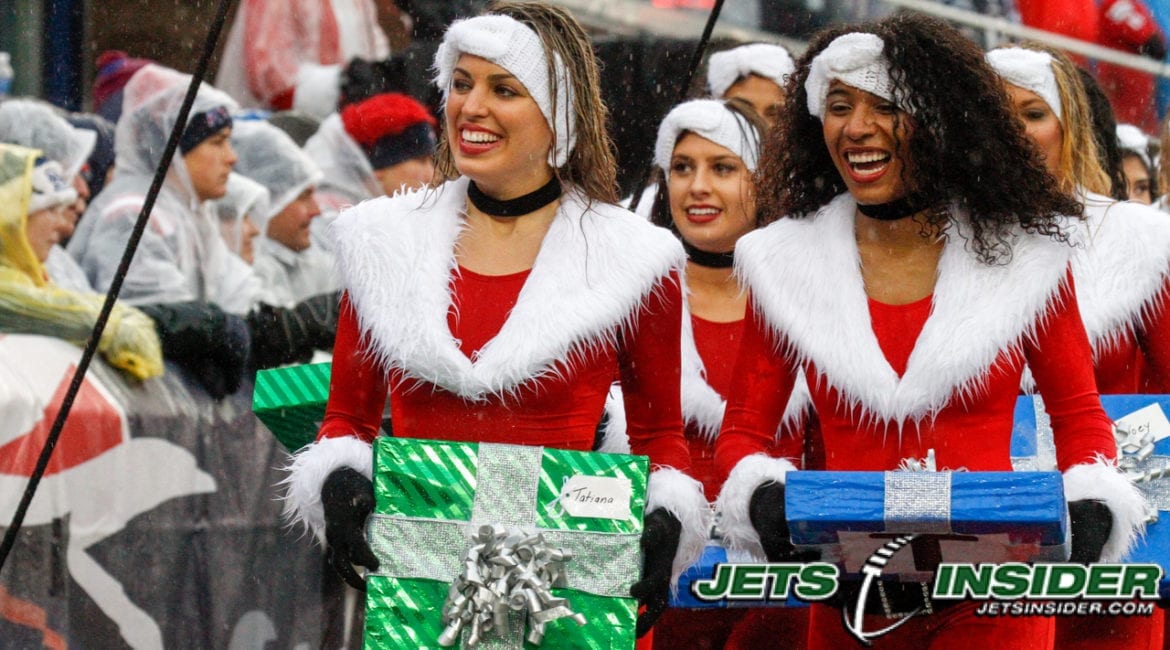 Florham Park, NJ – The Holiday season is upon us Jets fans. Unfortunately at this festive time of year, the New York Jets hold a 3-8 record, sit at the bottom of the AFC East and are on the verge of elimination. Looks like a Blue Christmas! The problem with the Jets is that they are suffering from Groundhog Syndrome when the same mistakes harp them week in and week out, causing them to lose their last five games. Changes need to be made and with Christmas right around the corner, everyone’s writing their wish list in hopes that Santa will bring some goodies. Here are some things that should be on every Jets fan’s wish list this holiday season.

The offensive line has been a huge thorn in the Jets offense’s side….a lump of coal for all of them. In the Jets three wins this season, the offensive line was solid doing their job of opening holes for running backs and keeping pressure off the quarterback. In the past five games, the line has been ridiculously inconsistent. Against the Chicago Bears, they couldn’t open a hole with a hole puncher for the running backs but were able to give Sam Darnold time to throw. Against the Buffalo Bills, the Jets rushed for 79 yards on 17 carries with only one touchdown in the game that came from Isaiah Crowell. When it came to the passing game, Josh McCown was sacked three times and pressured into throwing two interceptions. Basically, he was scrambling like his life depended on it. Let’s not forget Spencer Long’s 15 botched snaps against the Miami Dolphins which was a huge factor in the Jet’s loss by only one score. It’s time to make some major changes to the line, Ebenezer Maccagnan.

Some of the offensive line options in free agency include guards Mike Iupati and Andy Levitre, tackles Bobby Massie, Daryl Williams, Cameron Fleming and Seantrel Henderson. Most likely the Jets will have a top 5 draft pick and depending on who is available could use it to draft an offensive lineman. In the draft, some of the top players are Greg Little from Ole Miss, Trey Adams from Washington, and Jonah Williams out of Alabama. It is imperative for the Jets to improve their offensive line for the 2019 season to help Darnold mature and reach his potential.

The Addition Of A Defensive Lineman

The Jets defensive line has not impressed anyone this season. In 2017, the defensive line combined for nine and a half sacks among five players. This season, only Henry Anderson and Leonard Williams have gotten to the quarterback, combining for five and a half sacks. With the 3-4 formation, linebackers should be getting to the quarterback more often than the defensive line but even the linebackers are a no show. The inside pressure has not been there this season and nose tackles Steve McLendon and Mike Pennel have been irrelevant. Both have zero sacks and a total of 23 tackles between them. Along with McLendon and Pennel, rookie defensive end Nathan Shepherd has been like the Ghost of Christmas Past…. invisible and over with! The Jets could use a more experienced pass rusher on the right side of the line and keep Shepherd for depth next season.

For the nose tackle position, there are some big names in free agency that can fill the hole. Guys like Ndamukong Suh, Haloti Ngata, Danny Shelton, and Brandon Mebane will be on the free agent market this March. Some defensive ends include Ezekiel Ansah, DeMarcus Lawrence, and Cameron Wake among other big names that will be available as well. The Jets currently have the fourth overall pick in the draft and could use that pick on a defensive lineman as well. They have done well in the past developing defensive linemen such as Muhammed Wilkerson and Sheldon Richardson even though they were sent packing. Depending on where the Jets finish this season, they have a strong chance to pick a special defensive talent like Nick Bosa, Ed Oliver and Quinnen Williams. Gang Green has an opportunity for a gift wrapped franchise player in this draft. Finally, the Jets should also reconsider drafting players from division II schools. Stick to the big boy’s league like the Big 10 or SEC who play against the best of the best and get as much experience as possible.

It’s time for this team to head in a different direction. Todd Bowles has a record of 23-36 as the Jet’s Head Coach and that record will not be improving any time soon. This Jet’s team is young, has energy, and potential to be something special. Everyone thought this would be the year that the Jets turn things around and would once again be a winning team. That obviously hasn’t happened. And it’s not all Bowles fault. The offensive play calling needs to be changed. Against the Patriots on Sunday, Josh McCown was 26 for 45 with 276 yards and the running backs rushed for 49 yards on 12 rushes. It seemed like the ground game was finally having a good day but Jeremy Bates refuse to put the ball in the running backs’ hands. And with seven minutes left and down by two touchdowns, the offense didn’t run the no huddle to change things up and get the Patriot’s defense on their heels. But it’s not the first time the Jets were behind late in the game with no show of urgency on the offense. Week in and week out, Bates has made the wrong play calls and wrong decisions. With the Patriot game tied, the Jets made no adjustments at halftime and had no surprises for Bill Bellichick in the second half. With a franchise quarterback waiting in the wings, a shake up at head coach and offensive coordinator might be just what this team needs. Two of the biggest head coaching candidates this off season are Minnesota Viking’s Offensive Coordinator John DeFilippo, who was also the Philadelphia Eagle’s quarterbacks coach last season, and Matt LaFleur, who is a well known quarterback coach and now Tennessee Titan’s Offensive Coordinator. If changes aren’t made, Mike Maccagnan will find himself on every Jets fans naughty list.