Enunwa’s role grows but he still ‘just wants to play’ 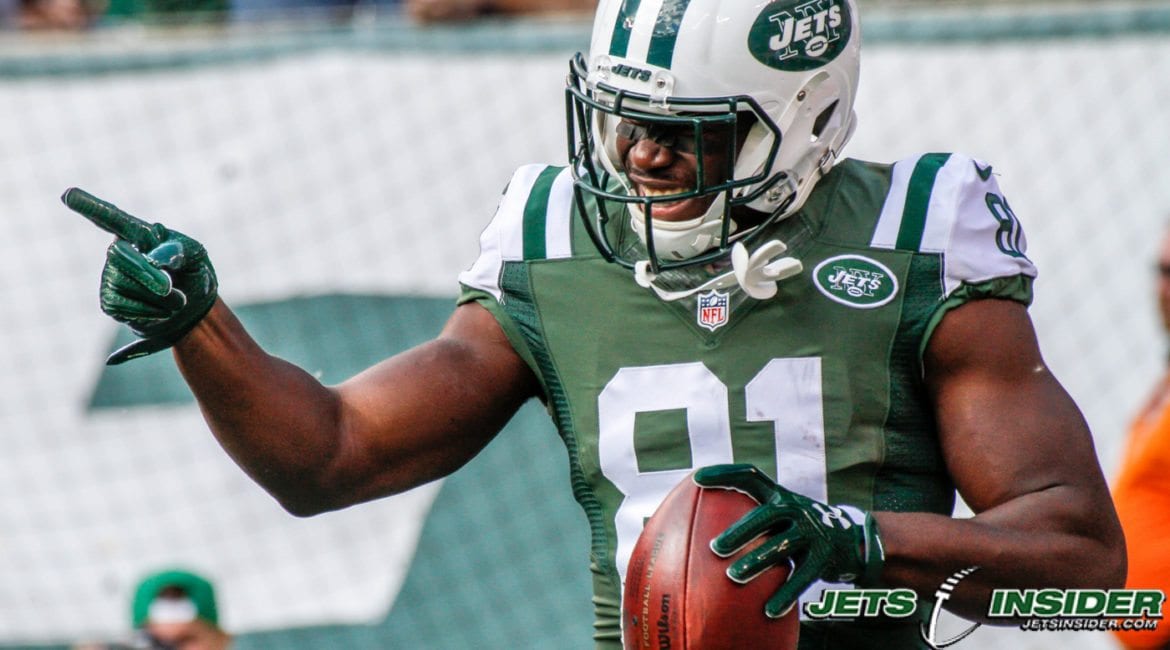 Wide receivers are looked at as divas, and understandably so because we’ve certainly seen our fair share of diva receivers, but not all receivers fit the diva mold. Quincy Enunwa proves that receivers can be a ‘bring your hard hat and lunch pail’ type of guy too. That’s what being drafted in the sixth-round, with no guarantee of a roster spot, will do to a receiver.

Enunwa was the 209th pick in the 2014 draft, no one had any real expectations for the Nebraska receiver but he was determined to prove that he could play in this league. Enunwa was raw coming out of college, playing in the run heavy offense at Nebraska didn’t do him any favors as a receiver but it was the way he crafted his blocking ability that allowed him to stick around on an NFL roster while developing as a receiver. Now, entering his fourth-year, Enunwa will be the number one receiver on the Jets depth chart and he knows he will be doubted again, but he still just wants to play.

In 2014 Enunwa spent all but one game on the practice squad, in ’15 he played in 12 games – started six – and caught 22 passes for 315 yards and no touchdowns. Then last year he proved to the NFL that he belonged in this league, catching 58 passes for 857 yards and four touchdowns. Sure he had Brandon Marshall, and for part of the season Eric Decker, getting the attention of the defense but he also put up those numbers with Ryan Fitzpatrick and Bryce Petty at quarterback. This year, the quarterback situation hasn’t gotten much, if any, better and both Marshall and Decker are gone and still when asked how he sees his role changing, Enunwa said he “just wants to play.”

Fans, media and even opposing defenses will worry about Enunwa’s role, he’s just going to keep showing up with his hard hat and lunch pail and play. He wasn’t concerned about how many touches he’d get last year and he’s not going to worry about having to be the number one receiver this year, he’s just going to show up to work and play hard. Besides, as a former sixth-round draft pick he knows just because he’s now the biggest name in the Jets receivers room that doesn’t mean some of these young guys can’t step up, make plays and make a name for themselves.

“I just want to play. I think we have so many play-makers out there, I think you guys have been watching practice (and) you’ve seen the guys that are making plays. So, it’s not going to be just me and that’s great. I don’t have to go out there and think that it’s all about me and I won’t, I’m going to go out and play,” Enunwa said. “There was times last year where I had the top corner, there was even maybe one or two plays where I got doubled a couple of times, but that’s not going to happen every game so I just have to go out and play and I know the coaches are going to (come up with) the best game plan, however they need to.”

Enunwa is going to continue to play the role of the good solider, taking orders and doing what’s asked of him. He’s going to put in the hard work to succeed, but he knows that even though he’s only in his fourth season he’s the leader of the receiving group. He knows people will doubt him, the receiving core and the team, but he’s used to those doubts and he looks forward to proving those doubters wrong once again.

“Of course. That’s (proving critiques wrong) always going to be something we want to do, especially myself being a guy that wasn’t drafted high, wasn’t looked at high, I always want to prove what I’m capable of doing every year and I know I got a lot of young guys in the room that are hungry,” Enunwa said. “We got undrafted guys, we got seventh-round guys, we don’t really have any top guys, so if we can come out this year and really prove everybody wrong I think we’re going to be happy.”