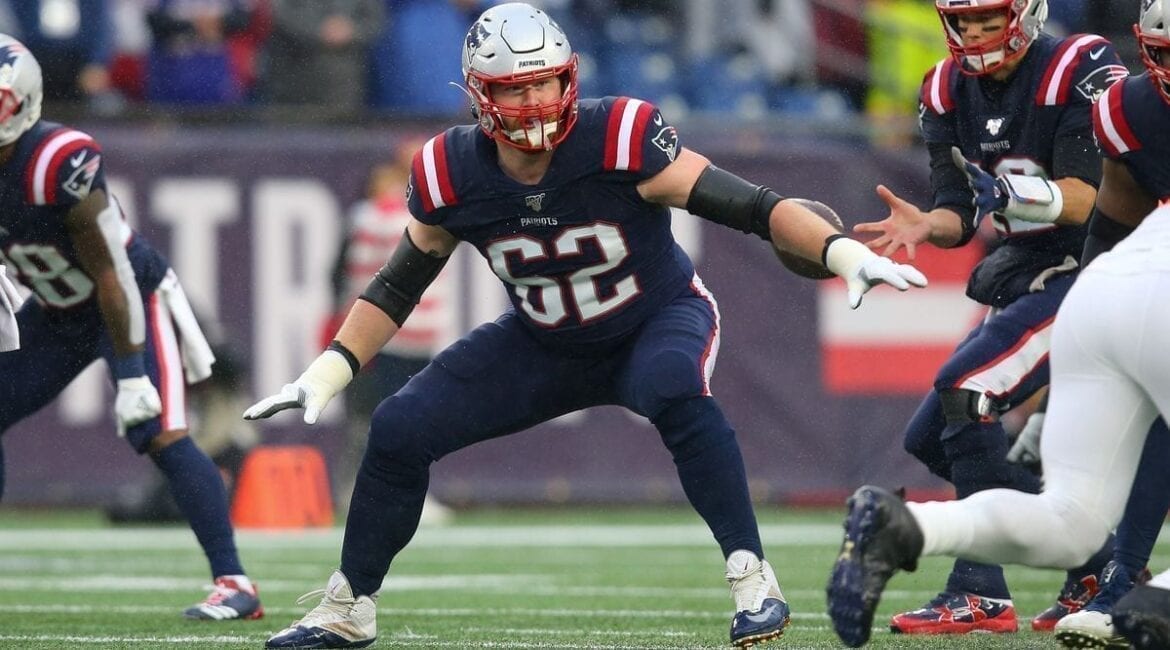 After going through a couple of free agent center options that could intrigue the Jets, we stay along the interior offensive line with the top left guard set to hit the open market — New England’s Joe Thuney.

Since being taken in the third round of the 2016 Draft, Thuney has started at left guard for all 74 of New England’s regular season and playoff games. He has logged 5,279 snaps in his career, grinding out at least 1,201 in each season.

Thuney has developed into an absolute stud for the Patriots. Seen below are his regular season Pro Football Focus ranks in each season, among guards with at least 600 snaps.

New England had some troubles up front in 2019, but Thuney was not part of the issue. Check out this dominant rep in pass protection. Thuney (#62) holds up for about 6.6 seconds, which is an eternity in football time (about 164% longer than the approximate league average snap-to-throw time of 2.55 seconds). That gives Tom Brady enough time to find N’Keal Harry for a seven-yard touchdown.

Thuney is dominant out in space, largely a product of his elite athleticism.

However, while it certainly raises a player’s potential as a blocker in space, athleticism on its own does not guarantee success on the move. Quick jumps off the ball, good timing arriving at the spot, accurate positioning, and finishing ability are all crucial skills.

Thuney displays many of those traits on the following play, as he leads James White to a 23-yard touchdown off of a screen pass. When you combine top-notch agility with great technique, you get blocks like this.

Ted Karras does a nice job there as well, throwing two key blocks to pave the road for White.

Thuney’s mobility makes things happen on the ground as well. Watch here as he pancakes the linebacker all the way out near the sideline, seven yards beyond the line of scrimmage.

Thuney is as good as it gets at avoiding penalties. In 2019, he was not penalized a single time, joining Marshal Yanda as the only qualified guards with that distinction. In 2018, he was called for just four penalties, which tied him for the 26th-most among guards despite playing the third-most snaps (1,120). In 2017, he tied for 32nd with three penalties while playing the second-most snaps (1,134). To sum it up, over the past three seasons, Thuney has on average ranked second among guards in snaps played and 39th in penalties.

As I explained with Karras, at least a slight bit of skepticism should be applied when considering the possibility of adding New England linemen. Offensive line coach Dante Scarnecchia has been getting it done over there for a long time. The Patriots always find a way to make it work, regardless of injuries or talent level. It can be risky to expect a Patriots lineman to perform similarly well outside of the fruitful New England environment.

However, Thuney seems to be great enough of a player to where you can feel confident that his productivity will carry over to a new organization. He has been a starter from day one and has held that role down over each and every game since, steadily improving into one of the best guards in football. Thuney is right up there with Brandon Scherff and Jack Conklin in the A-tier of free agent targets for the Jets.

Get to recruiting, Nick!