Let’s Talk About This OL 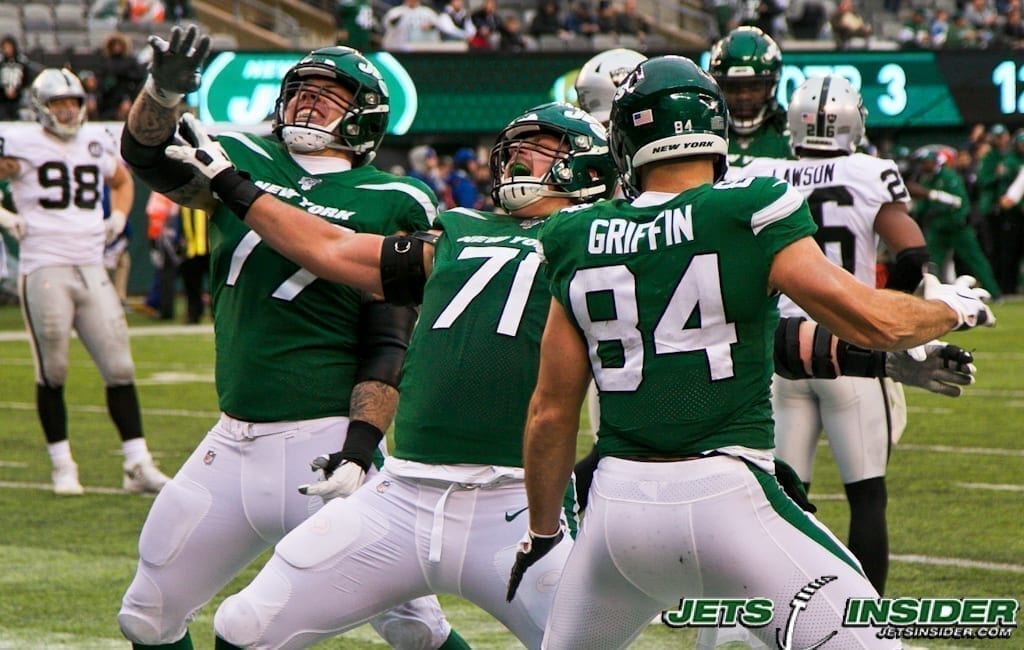 Jets fans seem to be confident that this offensive line has improved from last year. I’m not so sure about that. I think, at best, it’s a minimal improvement for this year with a huge step towards future improvement. But for this year and this year alone? It feels pretty close to a wash.

Let’s start with a familiar refrain, “they can’t be worse than last year.” Those are the famous last words of a Jets fan’s hope for the upcoming season. No matter how many times the Jets have proven that something can, in fact, get worse fans continue to cling to this hope. Add a clear upgrade at center and the addition of a first-round pick with sky-high potential and fans are expecting a big improvement. It’s understandable. It’s just far from a given.

If I were to judge this offensive line strictly off of training camp, I’d say they’re just as bad as last year. It has not been pretty. They can’t run block consistently and the pass protection is equally shaky. But it has to be pointed out that this is a completely new unit. Four of the starters are new additions to the team. Weird offseason, followed by less practice time and no preseason games makes it harder for a new group to learn to play together. They need time to gel, to know how to play alongside each other and communicate clearly. This is all more difficult than it sounds.

So, it’s entirely possible that by Week Four, or more likely Week Eight, these guys settle down and start playing much better as a unit. But even that is a hypothetical rooted in hope.

When you look at this unit there is the clear upgrade at center and the depth is definitely improved. But everywhere else looks like a push or maybe a little worse.

Alex Lewis is the one returning piece. He’s okay, but that’s it. Nothing more. Again, McGovern is a clear upgrade over Ryan Kalil and Jonnotthan Harrison. However, Greg Van Roten has not looked good. He’s worse than a healthy Brian Winters, but better than a hurt Winters playing through the pain. And we know with Winters, he’d get hurt but play four games before we found out he was hurt.

George Fant got beaten consistently at the beginning of camp. Then closed camp much stronger. This might sound promising, but the reason why should give you pause. The timing of when Fant’s play improved coincides perfectly with Tarell Basham’s injury.

Basham was beating Fant regularly before getting hurt. With the Jets already light at edge, they simply don’t have anyone else to send out there to challenge Fant off the edge (Jordan Jenkins plays mostly on the other side). If Basham was enough to give Fant fits, what are the 49ers, Chargers, Bills, Patriots and Browns defensive lines going to do to him? Which reminds me, when comparing last year’s line with this year’s line we also have to factor in how much tougher this year’s schedule is than last year’s.

Now for the part you care most about, Mekhi Becton. For a more detailed explanation, click the link to our Jack William’s article on this.

Let’s be clear, I love the player and the kid. I loved him in the draft and I’m even more sold on his long-term potential now. He’s far more talented/gifted than Kelvin Beachum. He’s bigger, quicker and stronger than Beachum. So, from that standpoint he’s an upgrade. But Beachum was a savvy vet. Becton is a rookie who still needs to improve his technique and fundamentals. That’s likely going to balance out. He’s going to have moments and stretches where he’s dominate and looks amazing. But he’s also going to have his struggles. So some weeks he will likely be an upgrade over Beachum, but on any given week he could struggle and be a downgrade over the veteran.

Long-term, the future looks bright for this unit. McGovern at center. Becton anchoring the left side for a decade. Cameron Clark looks like he could develop into a starter next season. With Joe Douglas calling the shots, I have faith he will be able to upgrade the other two spots on the line next season. But for this season, there’s likely to be too much inconsistency for me to expect that much improvement.

This line will have moments where they can protect Sam Darnold and if Becton gets his hands on a defenders he will pancake them and open up big holes for backs. But unless they take a huge leap in improvement sometime before Week Four, I have my doubts that they’ll be much better than last year as a group.