JetsInsider.com > News > Blogs > Next Man Up: The Jets Must Overcome Injuries on Offense

Next Man Up: The Jets Must Overcome Injuries on Offense 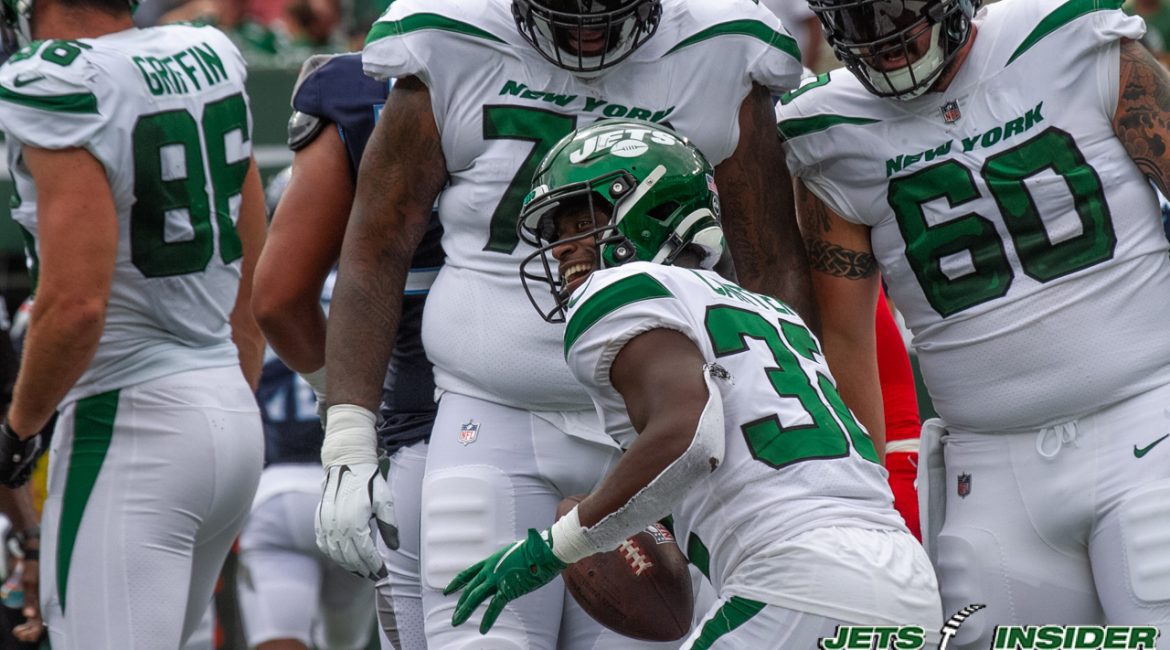 It’s been an interesting 2022 NY Jets season, but Next Man Up: The Jets Must Overcome Injuries on Offense. In Week 7, the Jets had a week split down the middle with positives and negatives. On the positive side, the Jets won their fourth straight game, defeating the Denver Broncos 16-9. The win elevated the Jets’ record to 5-2, one of the team’s best starts in recent memory. The defense led the way once again, as D.J Reed and Sauce Gardner had shutdown performances at cornerback.

Gardner and Reed, according to PFF, had coverage grades of 90.3 and 86.1, respectively. Gardner continued his impressive start to his career, as throughout seven games, he has only allowed one catch for 4 yards in single coverage and has 12 pass deflections. As I mentioned last week, Gardner continues to be a slam-dunk selection for the Jets in his rookie year. Reed also has been great up to this point, having seven pass breakups and not allowing a touchdown on the season.

Quinnen Williams and C.J. Mosley each produced as well, with Williams looking like a force in the run game and Mosley having eight tackles. The special teams also helped win the Jets this game, as kicker Greg Zuerlein produced ten of the team’s sixteen points on the day.

The negatives, unfortunately, were just as big as the positives, as the team lost offensive lineman Alijah Vera-Tucker and running back Breece Hall to season-ending injuries.

Vera-Tucker had been the team’s best offensive lineman through seven games, displaying a high level of versatility at multiple positions. Appearing at right guard, left tackle, and right tackle, Vera-Tucker looked above average at every position and brought stability to the team’s offensive line.

Hall had displayed superstar talent at the running back position, leading the team with 463 rushing yards and four touchdowns through seven games. Hall also had 218 yards and one touchdown through the air, giving him 681 yards from scrimmage. In addition, his 6.88-yard average per touch was good for second in the league, further displaying how Hall was the engine of the Jets’ offense when healthy.

Despite these significant setbacks, head coach Robert Saleh is not worried about the players filling in the roles of Vera-Tucker and Hall.

Next Man Up: The Jets Must Overcome Injuries on Offense

Carter spoke after Sunday’s game about his focus in light of Hall’s injury.

“I think that I’m prepared. You want to go every week. We don’t want anyone here to get hurt. That is football kind of. I don’t want to have to get ready, instead of just staying ready.”

Zach Wilson also spoke about the team’s mindset and attitude, especially after the injuries, as mentioned earlier.

“We just have to keep moving forward… I said, ‘Listen, take advantage of this opportunity. Step up. Grow a pair.’ I think that’s what I said…but I think the guys got the message. Guys stepped up and saw it was their opportunity and that this is where more money, more playing time, and other things come for people. “

Almost a day after losing Hall to injury, the Jets swung a trade to acquire former Jaguars running back James Robinson. In exchange for Robinson, the Jets sent a sixth-round pick that can convey into a fifth-round selection. The Jets have also been linked to various tackles on the trade market, signaling an effort to potentially upgrade their offensive line after losing Vera-Tucker.

Losing Hall and Vera-Tucker are considerable blows to a team that looked like it had finally taken a huge step forward. They were, and are, two of the main building blocks for the Jets, and their production is not something that can be replaced. Yet, the Robinson move signals that this version of the Jets will not simply roll over and use injuries as an excuse. Instead, Joe Douglas and the front office are showing the players and fanbase that they are willing to accelerate the team’s timeline and go for it this year.

Heading into this upcoming weekend, the Jets have a pivotal AFC East matchup with the Patriots at home. With the potential to move to 6-2 and gain another divisional win, it is shaping up to be one of the biggest Jets home games in recent memory, especially against an opponent that embarrassed them in their home stadium last year.

Essentially, it is time for players on the offense to be the “next man up.” Micheal Carter and James Robinson will need to carry the load in the backfield and keep the Jets’ running identity in place. Zach Wilson needs to elevate his play and allow the offense to become two-dimensional when he is called upon. Receivers Garrett Wilson and Elijah Moore need to continue to get open and take advantage when the ball is thrown their way.

There is still reason to be very optimistic about the Jets this season, namely, a defense with its key contributors and playing at a borderline elite level. Moreover, they are far from dead, as they currently are sitting in the AFC playoff picture and have one of the best records in the conference. But to stay in this position, the team will need the offense to step up, especially Wilson, Carter, and Robinson.

Football is a violent sport, and injuries are, unfortunately, a significant part of it. Teams can either crumble under the weight of injuries or find different ways to push past it. Of these two options, the best teams are the ones that can overcome adversity and continue winning. The Jets, faced with adversity once again, now have a prime opportunity to prove that they are a team that can overcome their challenges, become a legit threat in the AFC, and ultimately pushes for a playoff appearance.