JetsInsider.com > News > Blogs > Sauce Gardner Already Looks Like a Home-Run for the Jets

Sauce Gardner Already Looks Like a Home-Run for the Jets 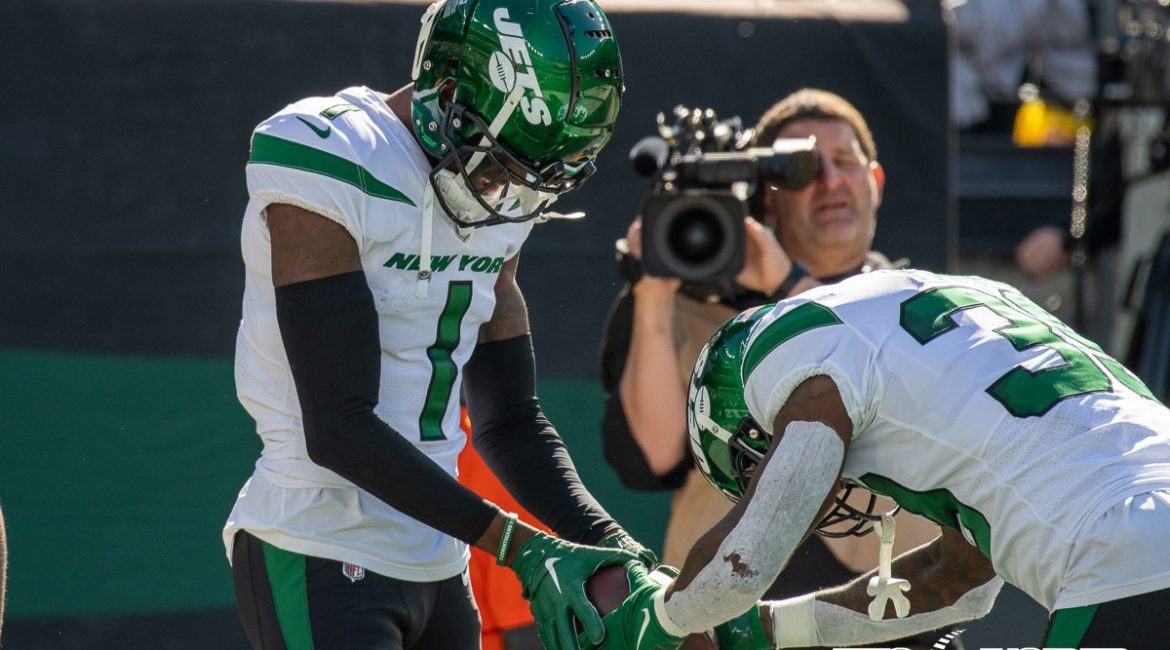 Coming into this season, not many people expected the Jets to make any noise at all. They were a team filled with potential and young players, and while the team was expected to take a bit of a leap, they were expected to hover around the 6 or 7-win range. Sauce Gardner already looks like a home run for the Jets. Although considering the team’s schedule, which included the usually tough AFC North, and the team’s performance last season, this 6 to 7 wins seemed like a reasonable expectation for the Jets.

In reality, this young Jets team is ahead of schedule for these expectations. Sitting at 4-2 as they head into Week 6, the Jets have won three straight games against Pittsburgh, Miami, and Green Bay. In these games, the Jets have outscored their opponents 91-47, giving them a plus 44-point differential. They also have yet to lose a road game on the season, the only team in the AFC that has yet to do so.

The Jets’ shocking start has been powered by the young talent on the roster, both on offense and defense. Breece Hall has emerged as the lead back for the team, showcasing elite traits and production in the passing and running games. I called Hall the “engine” of the Jets offense last week, and he has continued to prove his worth through his play and his ability to take the weight off of Zach Wilson’s shoulders. Alijah Vera-Tucker has looked like one of the most versatile linemen in the NFL this season, flipping between three positions in six games. Garrett Wilson has also showcased his elite separation ability early in his career, while Michael Carter continues to show that he can still be a key part of the offense.

On defense, Quinnen Williams has been an absolute force in the middle of the Jets’ defense. He has five sacks and 13 tackles on the year while also having a 14.8 percent pressure rate, which are stats that lead all interior defensive linemen. Carl Lawson, according to PFF, has 2.5 sacks and 11 hits QB hits on the season. He has also been key in opening up pass rush opportunities for Sheldon Rankins and John Franklin Myers, both of whom are also having good starts to the year. Jermaine Johnson, before his injury, was also becoming a major key in the run game for the team’s defense. The secondary has also been vital for the Jets, as Micheal Carter II and D.J. Reed have been two key pieces in shutting down opposing receivers.

Sauce Gardner Already Looks Like a Home-Run for the Jets

Out of all the young talent on the team one player, though, has been the most impressive young player on the Jets outside of Hall and Williams. That would be none other than Sauce Gardner, the cornerback drafted number four overall in this past year’s draft.

At Cinncinati, Gardner did not let up a touchdown in his entire career and only allowed 131 yards total in 2021. His performance garnered him recognition and consideration as one of the best CB in the country; on top of the small yardage amounts let up, Gardner had 40 total tackles, a forced fumble, and five tackles for loss.

Despite the impressive numbers in college, some expected Gardner to experience a bit of a learning curve at the begging of his NFL career. The NFL tends to benefit the wide receivers and passing game more than the defense, making press coverage more susceptible to damaging penalties. With press and man coverage being one of Gardner’s main calling cards, the expectation was that he would need to acclimate to how the pro game is officiated.

Yet, Gardner has not hit any bumps in the road six games through his NFL career. He has allowed only a 19.0 passer rating when targeted in single coverage this year. In man coverage, he has only allowed 1 catch for 6 yards, while he also has only allowed 4 catches and has forced 7 incompletions on the year, according to PFF.

The stats match the eye test as well, as Gardner has shown an incredible ability to mirror and lock down all types of receivers. In addition, his speed and instincts have been top-notch in creating pass deflections and incompletions.

Head Coach Robert Saleh and Defensive Coordinator Jeff Ulbrich have spoken highly of Gardner since training camp. Back in August, Ulbrich said that Gardner “has a bright future in this league” and that the “DNA of the man is special too” when speaking to the media. Saleh spoke about Gardner’s vocalness, saying that the last CB he coached like that was Jalen Ramsey. Saleh also remarked about Gardner’s “mental makeup” and how the corner can easily move from one play to the next.

After the Packers game, Gardner spoke about changing the perception around the Jets this season. Gardner said that “preparation” is the main key and that he has “enjoyed it a lot.” The rookie cornerback also spoke about his rookie class changing the culture of the Jets after the previous week’s win in Miami.

“We’ve been great. All throughout the week, we always talk. We got a group chat, we say that we got to set the tone, we got to change the culture. I feel like we did it. It’s what the coaches want, to change the culture. I think we’re doing a very good job. Before the game started, for some reason, me, Breece (Hall), Jermaine (Johnson), Garrett (Wilson), Mike (Micheal Clemons), all huddled up and just talked about how we were about to dominate the game.”

By looking like a potential top-ten corner already, Gardner has elevated the team’s secondary and overall defense. He forms a very solid trio with D.J Reed and Micheal Carter II, along with Jordan Whitehead and Lamarcus Joyner adding solid safety play.

Gardner already looks like a home-run pick for the Jets, as he has shown the talent and production to be the team’s best cornerback since the days of Darelle Revis and his island. Between the confidence and production early in his career, Gardner has already become one of the most important players on the Jets’ roster. If he can keep up the production throughout the rest of the year, Gardner should be able to win the NFL’s Defensive Rookie of the Year award and solidify himself as one of the league’s next premier cornerbacks.

It has been a long time since the Jets have had a superstar talent on the back end of their defense that can completely change a game. Yet if his stats and play are any indications, Sauce Gardner is shaping up to be the next great cornerback for a Jets team that is on the rise.