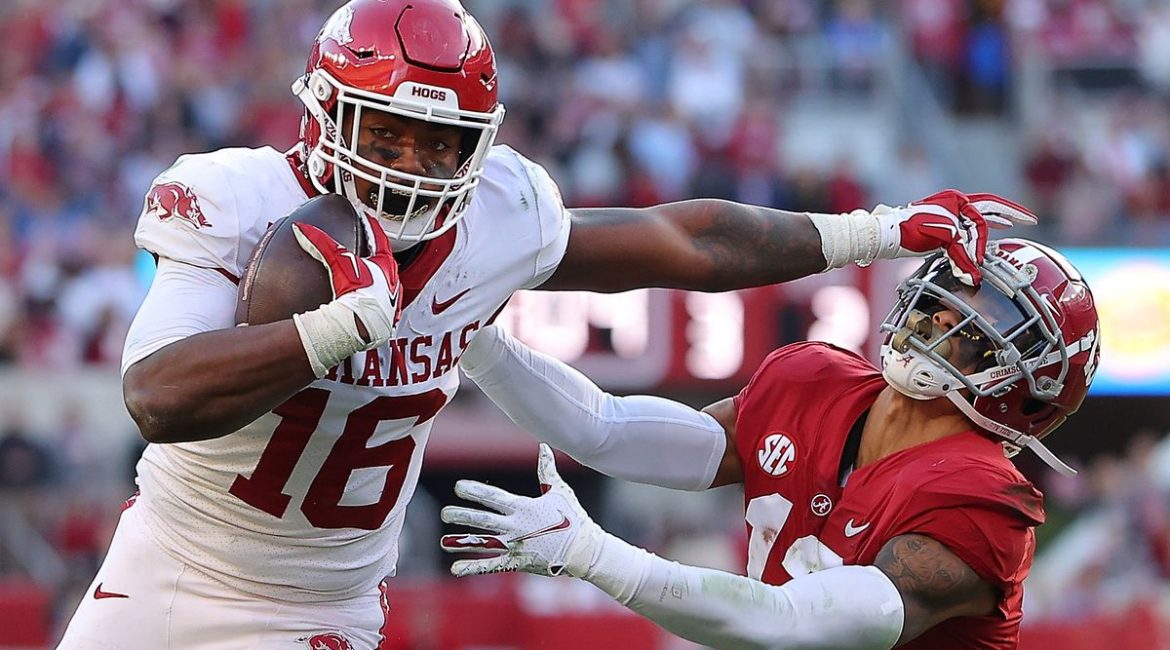 With the 2022 NFL Draft rapidly approaching, the Jets will soon be able to make use of the vast amount of draft capital that they have. As has been stated constantly since the season ended, the Jets hold five selections in the top 100 picks of the draft. This gives the team a great opportunity to build upon a solid free agency period in which they improved at CB, S, and TE.

Out of the remaining holes on the roster, adding a true number one at the wide receiver position is one of the biggest ones. Even with Elijah Moore and Corey Davis on the roster, the Jets still need another big addition to the position group. The team has already shown their hand multiple times this offseason in terms of their desire to address this need; they were in on Tyreek Hill until he chose the Dolphins and have been linked to Deebo Samuel, AJ Brown, and D.K Metcalf trade rumors. The Jets are proving that they want to give QB Zach Wilson every opportunity to succeed by trying to surround him with the best weapons possible.

Taking a trade for a star wide receiver off the table for now, the 2022 NFL Draft still offers a great opportunity for the Jets to add a difference maker to the position group. There are multiple top-end, first round-caliber receivers that would immediately maker the Jets offense better. While not as polished as the first round players, there are multiple players in the second or third round range that would make the Jets better as well

One of the main WR linked to the Jets in the first round is Drake London. As I mentioned in my mock draft article, which you can find here, London offers the Jets a true jump-ball threat at the position. He also brings size that currently is not on the Jets roster; London measures in at 6 foot- 3inches and weighs around 220 pounds. He uses this size to break tackles and contribute in the run game, two aspects that are very important in Mike LaFleur’s scheme. London also has experience playing all three wide receiver positions, which is also very important to the Jets’ offensive scheme.

Outside of London, both Garret Wilson and Chris Olave are potential targets for the Jets. Wilson, according to many, offers the highest floor out of the top receivers in the draft. He is a good route runner that also has above average speed, as evidenced by his 4.38 40-yard-dash time. Wilson also has decent YAC ability and contested catch ability, averaging 6.0 after the catch and a 61.5 contested catch rate according to PFF. Olave offers more of a pure speed threat at the position, similar to what the team wanted in a potential Tyreek Hill trade. Standing at around 6 feet, Olave wins with crisp route running and his speed. At Ohio State this past season, Olave had 13 touchdowns and 936 yards.

Jamison Williams and Treylon Burks have also been linked to the Jets in the first round, and both offer different skillsets that are not currently on the roster. If healthy, many would consider Williams to be the best WR in the entire draft class. His speed is unmatched when healthy, and he proved how special of a talent he was with a 7 reception, 184 yards, and 2 touchdown performance game against a Georgia defense riddled with NFL talent. His addition would give the Jets a speed element they do not currently possess on their roster, similar to Drake London.

Burks, on the other hand, is seen as a versatile piece on offense that could be schemed open from all over the field. Burks, according to PFF, was on a shortlist of WR who averaged 10 YAC last season and has the frame to operate at all three levels of the field.

In addition to the five “locks” of the first round, there are other receivers that offer intrigue for the Jets in the second round range. Skyy Moore possesses above-average speed along with quickness that allows him to constantly get open. George Pickens possesses both elite size and athleticism when healthy and could be the steal of the draft in the late first or early second round. Christian Watson also has elite size and speed, giving him the potential to be a threat immediately in the correct scheme.

It is all going to come down to preference for the Jets in this year’s WR draft class. If the team wants a speed threat to add a different dimension to their roster, then Williams would be the pick at 10 and Olave in any trade down scenario to the 15-20 range. If the team wants a high floor, immediate impact player, Wilson is a good bet to be elected at 10. London is the pick at 10 if the team want a true “above-the rim” receiver for the position group, and the second round option come into play if the team fills out positions like OT, Edge, and CB in the first round.

We will know for certain what the Jets’ plan at WR is very soon, but for now there is only speculation. It will boil down to what the Jets see as the biggest benefit to their WR room, and as a result, to Zach Wilson’s development at QB.