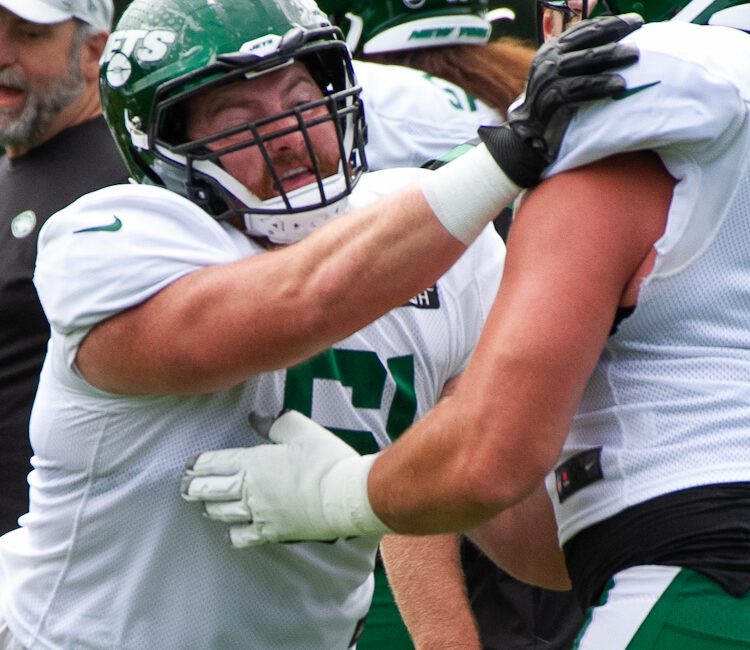 After a practice at MetLife Stadium, in front of 20,000 fans, the Jets returned to Florham Park and a smaller amount of fans. Today’s practice looked a lot like, well most of the practices. Zach Wilson had his good and his bad moments. Carl Lawson dominated the day, again. Corey Davis and Elijah Moore continue to be reliable weapons. And the offensive line looks great on run plays, but not in pass protection. The young cornerback group competes hard, day in and day out. It’s all starting to get a touch repetitive. So, today I decided to switch it up a bit which leads me to my first observation.

1) WHAT’S GOING ON WITH DENZEL MIMS?:

Today, I decided to track Denzel Mims. As the offense lined up for every snap, I looked to see if Mims was in. If he was I’d focus on him, on the depth of his routes and if he was beating his man. There’s been a lot of talk about Mims slipping down the depth chart and not having a good camp. From my standpoint, all I can say for certainty is he certainly isn’t getting a lot of reps. When you hear a receiver is having a bad camp, you probably think he’s not getting open or he’s dropping easy catches. Neither of those apply to Mims from anything I’ve seen. That doesn’t mean that he isn’t having a bad camp though.

It’s just that I can’t be asked to determine this. It seems the most likely explanation is Mims is having trouble learning the details of the playbook or he’s not running his routes as precise as he should be. So, I watched him closely today. Problem is, I don’t know what the exact depth of his routes are. Or the exact time he’s supposed to break in each route. All I can do is see if he beats his man, gets open and makes the catch when thrown to him. Today I saw him beat his man and get open on four plays where the quarterback never looked his way. The first time was in red zone, the quarterback found a quick strike on a slant immediately. The other three plays the quarterback would’ve been better suited to glance Mims’ way.

There’s been far too much focus on first-team/second-team reps. That part doesn’t matter so much. What does matter is limited reps. And Mims has been getting rather minimal reps. If the coaching staff doesn’t trust that you know the playbook or can’t run the route properly, they aren’t going to give you too many reps. That’ll just hold the entire offense back. Talk of Mims potentially getting cut is going too far. But if he can’t figure out what’s stopping him from earning more reps, trade talk will start to make sense.

2) LAWSON IS GREAT AND ALL BUT WHAT ABOUT BECTON?:

At first the news of Carl Lawson dominating was music to Jets fans ears. Now I’m getting a whole lot of questions about Mekhi Becton. If Lawson really good? Or is Becton struggling? Yes, Lawson is really that good. Yes, Becton is struggling at stopping Lawson. Am I concerned about the Becton side of things? Nope.

Let’s start with the fact that the defense has a huge advantage of offense without pads. Offensive lineman need to be able to grab ahold of those pads and move defenders. Then there’s the reality that Lawson is just a flat-out terrible matchup for Becton. Lawson is quick and powerful, but he also has a compact and relatively small frame. This makes it easier for him to slip out of Becton’s grip. Or to charge right at Becton then slip away with ease. Add to the mix that Becton is learning a new system and it’s a perfect storm for Lawson to take advantage of. The good news is, Becton is still bumrushing the defense in the running game. He’s just going to need to iron out the details in pass protection.

Josh Johnson got a couple of reps today. So he should be passing both backups. But for now they are back to where they were last year. Neither White nor Morgan look like you want them to be playing. However, if you need one of them to play I’m going to trust White far more. Both are capable of good throws, White makes them more often. Morgan also makes far more head scratching mistakes. It’s not like expectations are high either, yet I’m still left scratching me head too often.

Zach Wilson continues his up and down play, but the coaching staff is throwing a lot at him. They aren’t holding back at all. No kid gloves, no bringing him along slowly. They’re throwing everything at him. New installs constantly. This is enough for me to explain the rollercoaster nature of his practices. That and he’s a rookie, of course. This is all to be expected even if they were applying the training wheels, even more so without.