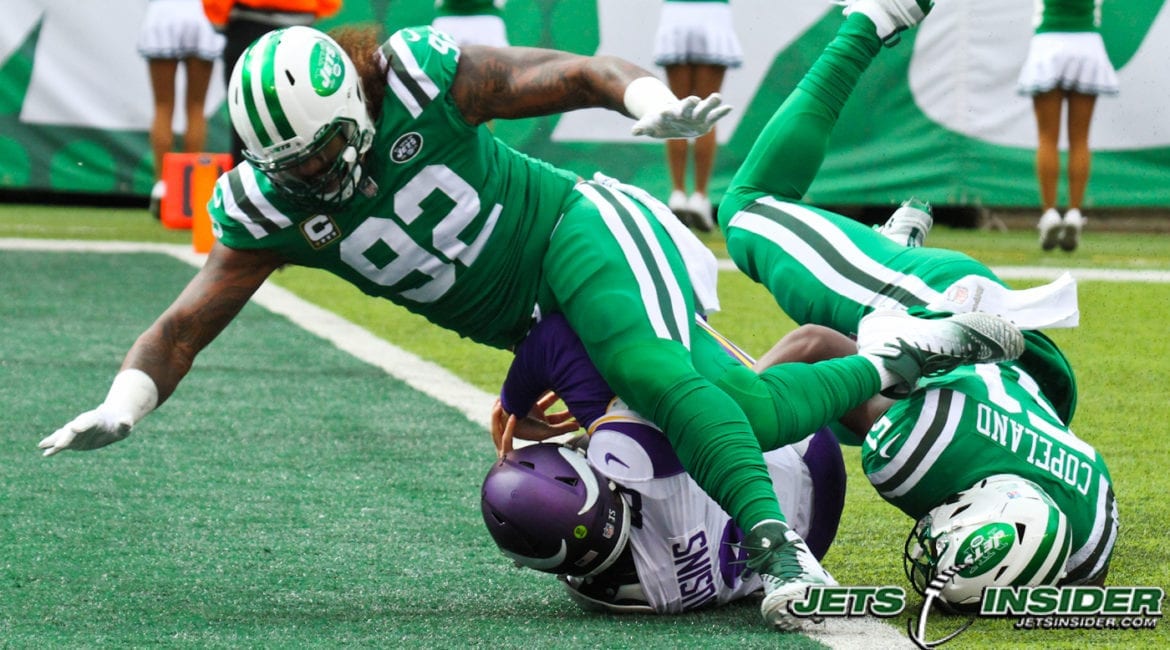 East Rutherford, NJ – The Jets were unable to overcome a number of mental errors and injuries going into today’s game and as a result suffered one of the biggest losses of the season 37-17. Kirk Cousins completed 25 passes of 40 attempts for 241 yards and two touchdowns. Adam Thielen once again got over 100 yards receiving for his seventh consecutive game and Latavius Murray had touchdown runs of 38 yards and 11 yards.

The Jets kept it close in the first half trailing the Vikings 10-7, but it was all Minnesota in the second half as all three sides of the Jets game broke down.

It took the Vikings less than two minutes into the game to put points on the score board. On the fourth play of the first drive, Cousins found Thielen in the end zone after Thielen out ran Darryl Roberts. Dan Bailey would convert the extra point putting Minnesota up 7-0 with only a minute and 18 seconds into the game.

The Jets and Vikings would play a game of tug-of-war on ensuing drives with great defensive stands from each team. Gang Green was able to even up the score before the end of the first quarter. On a six play drive starting at their own 14, the Jets were able to march down the field thanks to a 11-yard run from Bilal Powell and two long throws from Sam Darnold. Darnold was able to find Trenton Cannon for a 35-yard gain and follow that up with a throw to Robby Anderson for 25 yards to the Vikings 12 yard line. Darnold was then able to find Chris Herndon in the end zone for six.

Minnesota would go up by three in the second quarter with a field goal by Bailey. While on the Jet 8-yard-line, Doug Middleton would break up a pass in the end zone on third down forcing the Vikings to go for three.

The Jets defense would follow up by forcing four three-and-outs including one at the mid field after a fumble from Isaiah Crowell. Before the quarter ended, Bailey would send a 42-yard field goal wide left leaving the score at 10-7. Meanwhile, Jet injuries started to pile up. The Jets would also lose Powell with a neck injury and Doug Middleton with a shoulder injury for the rest of the game.

The Vikings were able to score on their first possession in the third quarter on a 10 play-drive that was capped off by an 11-yard touchdown run by Murray. The Jets could answer because on their first play of their ensuing drive, Darnold was picked off by Harrison Smith who returned the interception to the Jets nine yard line. Once again the defense held and Minnesota would not be able to get in to the end zone. Instead, they put three points on the board going up 20-7.

On their next drive Jason Myers would kick a 55 yard field goal for the Jets but it wasn’t enough to jumpstart a comeback. In the fourth quarter Murray scored his second touchdown of the day off a 34 yard run. Darnold’s next three drives ended in an interception, a QB sneak touchdown, and another interception. Minnesota was able to add one more touchdown and a field goal to put this contest out of reach.

The Jets looked like they had some momentum coming back after halftime but mental errors hindered their chances to stay in the game. Darnold threw some easy passes to the numbers of his targets but were dropped. This included a short pass to a wide open Crowell, a 10-yard pass to Eric Tomlinson, both who were wide open, and a deep pass to Anderson who couldn’t hold on to the ball. Fans made sure they voiced their displeasure.

The receivers were not the only guilty parties. Darnold over threw some passes which if completed could have racked up enough yardage to get key first downs. One throw ended up in an interception after the ball sailed way over the head of Andre Roberts. The rookie look uncomfortable in the second half, missing some of his receivers who were out of the game with injuries.

Darnold thought the offense executed well in the beginning of the game but said there was “a lack of execution in the other drives we had. When we were passing the ball they did a great job of covering guys and I’ve got to find the open guys and do a better job of execution.”

Coach Bowles didn’t just call out his offense in this disappointing loss. After the game he said, “It wasn’t just the receivers, it was everyone on the team. We didn’t play smart on offense, we had the turnovers, we gave up some timely plays on defense, and we gave up field possession on special teams. So all three phases didn’t play well.”

The Jets will be on the road next week as they travel to Chicago to face the Bears.