JetsInsider.com > News > Blogs > What Can Be Expected Out of a 21-year-old Quarterback?

What Can Be Expected Out of a 21-year-old Quarterback? 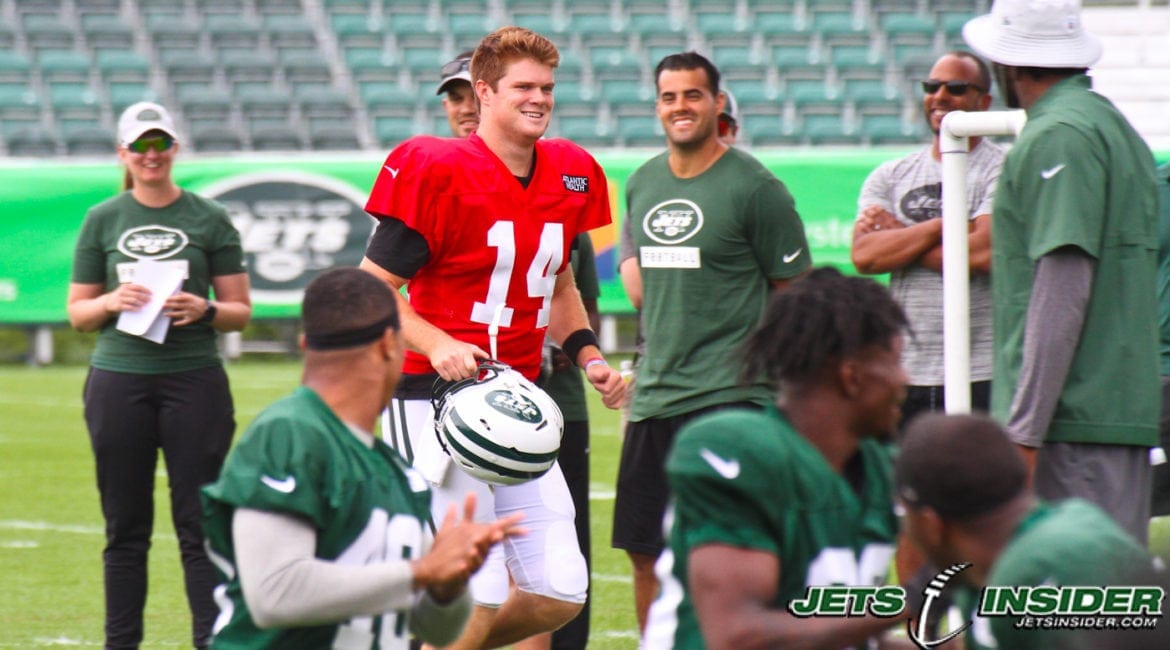 On Monday night, Sam Darnold will become the second youngest quarterback in the super-bowl era to start a game in the NFL, and the youngest ever to start week one.

So what can Jets fans expect out of a quarterback who was not legally allowed to consume alcohol until after he was drafted? Let’s start by looking at his historical counterparts. Since the AFL-NFL merger in 1960, there have been 19 quarterbacks to play before they turned 22. Darnold will be the ninth since 2000, and 11th since 1990. Here’s how they did, in order by age when they got their first start, since 1990:

Tommy Maddox, 21 years, 81 days: Maddox was selected 25th overall in the 1992 NFL draft as the future successor to John Elway. In week six, he got his chance to show what he was made of, and became the youngest player to complete a pass in the modern NFL. Elway was struggling mightily against Washington, and was yanked from the game. Maddox came in and went 2-8 with an interception. He would return to the pine until Elway went down with a shoulder injury in week 11 against the Giants. The Broncos won the game, and Maddox performed well, going 9-13 and 134 yards. In his first start the next week, a 24-0 loss to the Los Angeles Raiders, he threw two picks, was sacked four times, and fumbled three times, although the Broncos recovered two. He would lose his next three starts.

Michael Vick, 21 years, 138 days: Vick was selected first overall in the 2001 draft, and got some playing time right away in week one. He went 0-4, but ran twice for 32 yards. His first start was week nine against the Cowboys, and he went 4-12 for 32 yards and a touchdown while splitting time with Doug Johnson. He wouldn’t start again until week 16. The Falcons offense was pretty poor, and he accounted for 234 of the 255 yards gained against the St. Louis Rams that week.

Alex Smith, 21 years, 155 days: Smith was also selected first overall, after the 49ers finished a pitiful 2-14. Smith struggled right off the bat. His first start was in week five against the Indianapolis Colts  and was an absolute trainwreck; Smith threw four interceptions, went 9-23 (39.1%), and took five sacks. He was never fully healthy after that, and only started six more games. Smith didn’t ever really play up to his first overall selection, but he did improve massively in 2010 and has had a career resurgence since. San Francisco chose Smith 23 picks before Aaron Rodgers.

Drew Bledsoe, 21 years, 203 days: The first quarterback on our list to start week one, Bledsoe was also selected first overall. Bledsoe would get his first start against the Buffalo Bills right after their third consecutive super bowl appearance and on the road to their fourth. He had a decent game, going 14-30 for 148 yards, two touchdowns, and one interception. They lost that game 38-14, but Bledsoe proved he was ready to start his NFL career, even though the Patriots started 0-4.

Matt Stafford, 21 years, 219 days: Another quarterback selected first overall who started week one, his first start came against the eventual super bowl champs, the New Orleans Saints. Stafford threw three interceptions and went 16-37 for 205 yards. He had a paltry passer rating of 27.4, but did have a one-yard rushing touchdown in the 45-27 loss. The next game he threw two more picks in a 27-13 loss to Favre and the Vikings. They won the next week and Stafford had his first game with zero interceptions, but they would only win one more game the rest of the year, against the Browns. Stafford threw four picks on Thanksgiving.

Jameis Winston, 21 years, 247 days: Again, drafted first overall and started week one, Winston’s first game came against the number two overall pick Marcus Mariota and his Tennessee Titans. The first pass Winston ever threw was picked off and returned for a touchdown, and Winston looked like the worse of the two quarterbacks in the 42-14 blowout loss. He was the third rookie to ever break 4,000 yards passing, and because Tom Brady lost the AFC championship game, Winston attended the Pro Bowl in his place.

Deshone Kizer, 21 years, 250 days: Kizer may forever be tied to the hapless 0-16 Browns of 2017 although he was not solely responsible by any stretch. His first game was against the Pittsburgh Steelers, and he went 20-30 for 222 yards, one TD, and one INT in 21-18 loss. He threw five picks in the next two games before getting benched against the Jets in week five during the third quarter in favor of Kevin Hogan, who started the next games. Hogan struggled, and Kizer started the rest of the year. The Browns brought the Packers to overtime in a game where Kizer played very well, and threw three touchdowns. He threw a costly pick in OT that ultimately cost them the game.

Josh Freeman, 21 years, 299 days: Freeman, the 17th pick of the 2009 draft, started his career spectacularly. The Buccaneers started off 0-7 and cycled through two quarterbacks before switching to Freeman. He got the start week nine, and beat Aaron Rodgers in his first career start while throwing three touchdowns to Rodgers’ two. Freeman would go on to lose his next five games, including a pitiful 81 yard performance against the Jets.

Marcus Mariota, 21 years, 314 days: As stated earlier, he was the number two pick in the 2015 draft, and he performed very well in his first game, throwing four touchdowns in a rout of the Buccaneers. Inverse to Winston, his first pass was taken to the house but for his team, a 52-yard completion to Kendall Wright. He had a passer rating of 158.3, a perfect game, the first ever quarterback to do that in his first start. The Titans would drop their next six games, although it was mostly due to defensive woes.

Blaine Gabbert, 21 years, 345 days: Gabbert was selected 10th overall in 2011 to go to a horrible Jaguars team. Due to the surprise release of David Garrard and the poor play of Luke McCown, Gabbert was starting for the team by week three. He played decently in his first start, throwing a touchdown and an interception in a close loss to the Carolina Panthers. His only wins his rookie season were when Maurice Jones-Drew carried his team to victory, which he did in week seven against the Baltimore Ravens, when Gabbert was only able to muster 73 yards. Final rookie stat line: 210-413 (50.8%), 2214 yards, 12 TD, 11 INT, 4-10 record, 48 rushes, 98 yards, 2 ypc

So what does it mean?

Rookies throw a lot of picks, and often aren’t able to start all 16 games. They also don’t always get the touchdowns, despite moving the football. They all have losing records, but quarterbacks that are good enough to be drafted high and start right away generally go to terrible teams that are unable to do much to help them, like Smith, Stafford, and Gabbert. There were some lesser talented quarterbacks on the list, like Maddox, Freeman, and early Smith, so those could be considered worse than worst case scenario for a quarterback of Darnold’s ability.

The Jets are in a better situation than many realize, and their problems aren’t with talent, but protection. No matter how cool Darnold is in the pocket, once the NFL edge rushers and defensive lineman are in his face, he’s going to be looking to get rid of the football quickly. Expect Darnold to throw a large amount of interceptions, especially early, but it would be surprising if he threw more than 15-17, assuming he starts 16 games. Keeping in mind the Jets lack of pass protection, it is still possible that he will get 4,000 yards and 20+ touchdowns. Based on his college numbers of 67% and 63% completion rates respectively, he should also finish north of 60% completion. That stat line would look very similar to Jameis Winston’s, which is about what should be expected. Some bright spots, some low lights, and plenty of excitement.

There is an adjustment period to the size and quantity of talent in the NFL, and no matter how good a rookie is, they will throw a lot of interceptions. Peyton Manning threw 28 interceptions his rookie year. Keep the pitchforks at home for the rookie. Every single player on this list ultimately had a better season than their rookie season. Sam Darnold is younger than anyone to lead an NFL franchise into a season from week one, and he could very well end up having the best season of any 21-year-old in NFL history, but keep expectations realistic, as he’s just a rookie.

Darnold has time to improve, and he knows it: “Knowing that I am young compared to a lot of the other starting quarterbacks, I just know that for me I think that’s more of just affirmation, knowing that I got a long way to go.” said Darnold. “So I know that I just got to continue to work every single day. Put my best foot forward for the team, for the organization and just go out there and be consistent.”

The rookie has veteran poise, which has helped him get to this point after only five years of being a  quarterback. The laid-back California kid won’t rush anything. He’ll continue to improve, tiny detail by tiny detail. Enjoy the ride, trust the process, and believe in Sam Darnold.