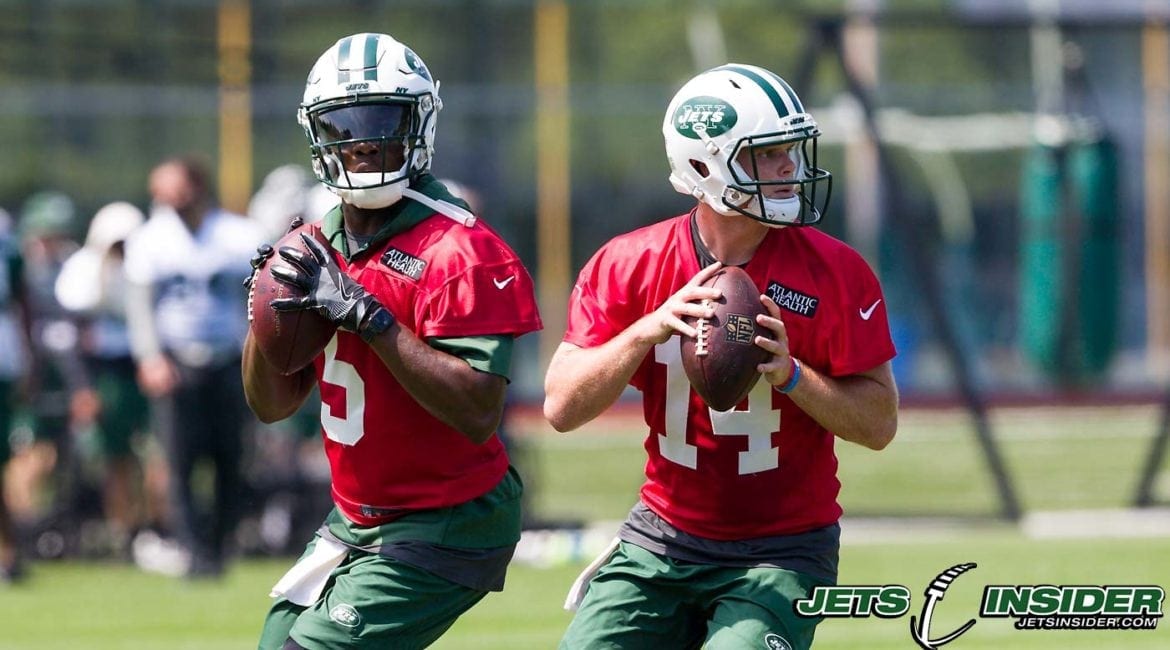 After three days of camp without Sam Darnold, the quarterback finally reached an agreement with the Jets on a four-year, $30.25 million deal, with $20 million in guaranteed money.

Practice commenced at 1:50 with just Josh McCown and Teddy Bridgewater on the field but moments later Sam came running out of the facility. He was greeted with a sarcastic slow clap from his teammates and a pat on the head by McCown.

With all the drama surfacing from the situation Jet fans were finally able to breath a deep sigh of relief, knowing they had locked up their franchise quarterback. As for practice, the club certainly had its ups and downs on the offensive end. A total of nine penalties, seven from the offense, were committed Monday. Todd Bowles stopped practice midway through after the team had back-to-back penalties in two plays.

Darnold looked shaky on day one but who can blame him. His first throw was him rolling out left and throwing a simple screen pass. During 11-on-11’s he struggled to move the ball and find wide receivers for open looks. His first real welcome to the NFL came on his third throw, where a tipped ball in the middle of the field was deflected by Derrick Jones and ended up in safety Doug Middleton’s hands.

He bounced back later on, throwing two touchdowns during red zone drills. The first to rookie tight end Chris Herndon. Herndon has looked awfully impressive through the first days of camp. With the departure of Austin Seferian-Jenkins, the tight end starting position is up for grabs. Eric Tomlinson has been at the forefront for snaps at that position, but even he had a drop today. Darnold’s second touchdown came on a rollout play to his right, where he found a wide open Quincy Enunwa.

Enunwa was by far the most dazzling out of the receiving corps today. Besides linking up for a touchdown from Darnold, he appeared in all parts of the field, catching multiple 20+ yard passes from McCown. He continues to wear the non-contact red jersey but Todd Bowles expects him to shed that soon.

As for the other receivers, Robby Anderson and Jermaine Kearse continue to look in mid-season form. Anderson toasted Rashad Robinson on a double move for a 40 yard grab earlier on in practice.

Kearse got the fans riled up early on with a beautiful touchdown catch during 1-on-1’s. He proceeded to whip the ball into the trees and scream following his grab.

Another standout on offense continues to be Trenton Cannon, who’s work during 11-on-11 and punt return drills have been impressive. One of the major flaws the Jets have had over the past 10 years has been no consistent punt/kick return man. With the way Cannon has played so far, he could be that answer.

Morphing the offense will definitely take time but the early groundwork is showing positive signs. Cleaning up the penalties and mental errors is something Todd Bowles wants to see fixed sooner than later.