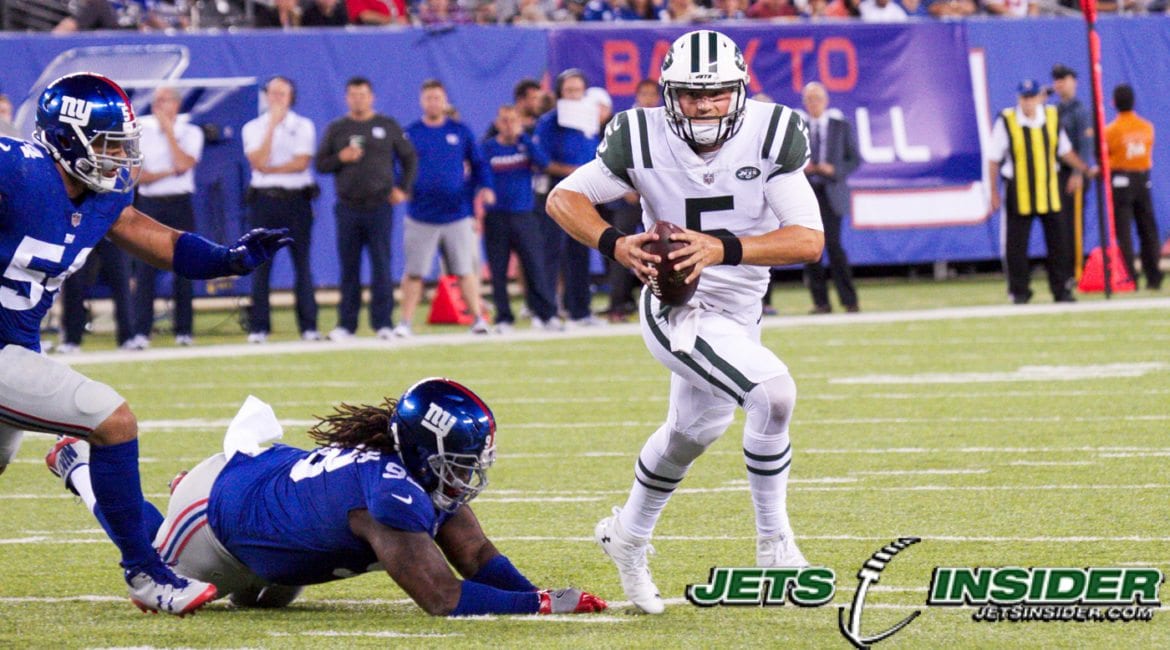 EAST RUTHERFORD, NJ: Close the book. Christian Hackenberg is not ready. This is not his time. He proved that Saturday evening, completing 12-of-21 for 126 yards with one touchdown and two pick-sixes in the Jets 32-31 loss to the Giants.

On the contrary, for the second consecutive week, Bryce Petty shined under center – granted, against backups. Shined, an understatement. The third string quarterback-turned backup-turned starter-turned third string-turned backup has made his case to seriously be considered for the starting job in Week One after a brilliant 15-for-18 outing for 250 yards and three touchdowns. However, his day was cut short after Petty injured his knee in the fourth quarter; an MRI is scheduled for Sunday.

“The first half we can’t turn the ball over. We gave them about 16 points on offense,” said head coach Todd Bowles. “I’m proud of the way we fought in the second half. Petty played well, he came in and made some throws and rallied the troops. They rallied around him. He had a good ballgame.”

The first half was nothing short of miserable for the Jets, who compiled a mere 127 yards and nine first downs. They were the laughing stock of the MetLife Bowl. As if a three-and-out to start the game was not bad enough, on the green and white’s ensuing possession, Matt Forte was brought down in the endzone for a safety.

Giants starter Eli Manning (7-14, 121 yards, one interception) and Josh Johnson (4-6, 67 yards) picked apart the Jets secondary for the entirety of the first half, connecting on throws for big gains with Travis Rudolph (three receptions, 81 yards) and Sterling Shepard (two receptions, 47 yards). They were without Odell Beckham Jr. and Brandon Marshall on Saturday.

In more ways than one, the Jets beat themselves more than the Giants did. With the Giants ahead 5-0 in the first quarter, Hackenberg rolled right from scrimmage, stared at Eric Tomlinson and was intercepted by Landon Collins and taken back for a touchdown.

The quarterback looked lost at times and had happy feet in the pocket. He constantly stared down receivers while missing open targets in the middle of the field. He was not good, nor ready, and it took two drives of Saturday’s tilt to understand that.

“It was the offense. It wasn’t Hackenberg. It was the entire offense,” Bowles responded when asked if he was discouraged about the quarterback’s rough start. “When you get hit like that as a quarterback and throw pick-sixes, it’s all hand-in-hand. It wasn’t just him.

To Hackenberg’s defense, the Jets offensive line turned in another abysmal performance. He was constantly pressured and was clobbered in the backfield several times.

“I’m proud of the way he came back in the second half. He threw a touchdown and got us down there, he learned some things in the first half that he can get better from. We’ll go from there,” said the head coach.

In a move that continues to confuse the NFL world, Bowles elected to give Hackenberg his second career preseason start despite dressing both Bryce Petty and Josh McCown. Give the coach credit; he has given Hackenberg every possible opportunity to take the job. It was worth a shot. It did not pan out.

But, with Petty’s status unclear due to the knee injury, questions remain unanswered as to who will be the team’s starter come Week One.

“We’re going to watch the tape and make our evaluations next week and we’ll come up with an answer,” said Bowles.

After one half of football, the Jets dug themselves a 29-3 hole that seemed insurmountable. In came Petty and the Giants backups looked lost. With over seven minutes remaining in the third quarter, Petty hooked up with rookie ArDarius Stewart for a 25-yard touchdown in the left corner of the endzone.

The Giants offense stalled with ex-Jets quarterback Geno Smith under center and Smith’s former backup – Petty – executed a three play 86-yard drive in 55 seconds on the next possession thanks to Bilal Powell to trim the deficit after a successful two-point conversion to 29-18.

Ten minutes remained in a half-empty but engaged MetLife Stadium when Mike Nugent nailed a 54-yard field goal to put the Giants up 32-18. But, Petty refused to be stopped, connecting with Stewart once more for a 15-yard score, making it a one-possession game.

The green and white’s defense came to play in the second half, forcing four punts while allowing just Nugent’s field goal. Their offense performed just as admirable and clicked relatively well in a two-minute drill to save the game. But, on the final possession, Petty dropped back in the shotgun and landed awkwardly after getting his knee caught with an offensive lineman.

“It kind of felt weird… it felt loose, which is not something you want to feel. It’s not stable,” admitted Petty. “But these things happen, you’ve got to roll with it. There’s always a plan with everything. Hopefully, we’ll be good for next week. I’m not concerned, we’ll find out everything [Sunday].”

Hackenberg returned to action and finished off Petty’s drive with a 17-yard touchdown in the back-left corner of the endzone to Frankie Hammond. The Jets fell short after they failed on a two-point conversion to ultimately win the game.

Holmes Out For Season,Easy Pickings Against Jets Soft Secondary,New York Jets Scouting Blake Cashman,Jets And Quinnen Williams Agree To Deal,Favre Traded To Jets,Wake Up Call For The Sanchez Apologist,Mano A Mano,How You Can Attend Santonio Holmes Charity Event On Sept 10Th,Lunch With Woody,All 22 Film Breakdown Of Jets Bills