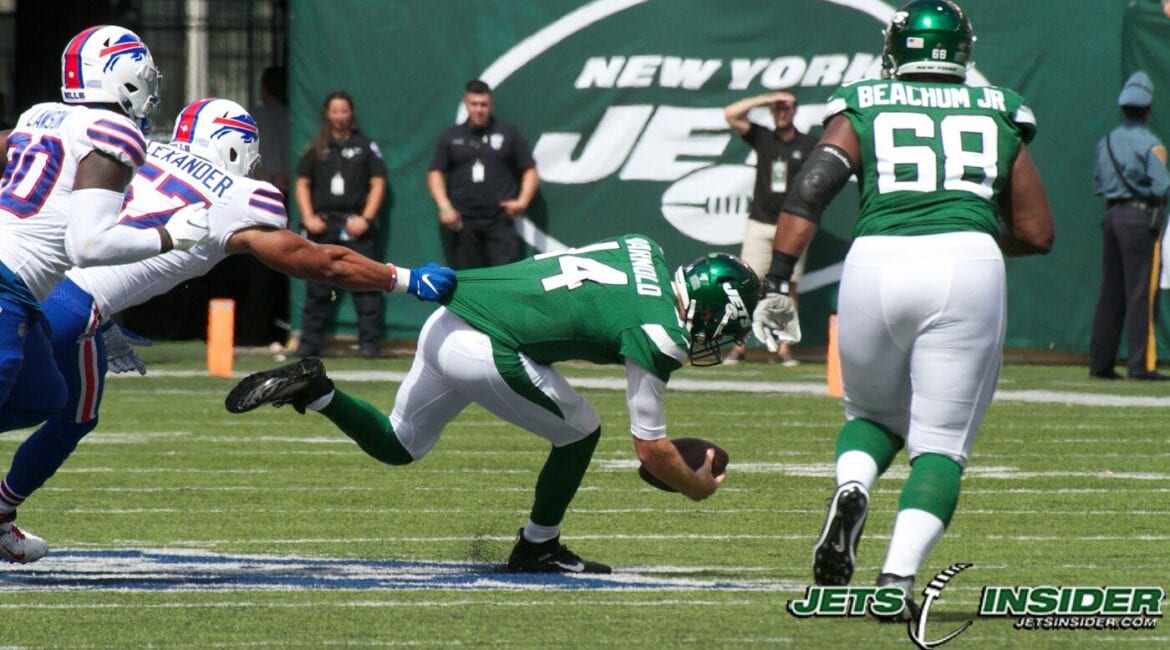 You couldn’t have scripted a much more brutal loss to open the season, but the Jets found a way to make it hurt as much as possible. After an entire offseason of positivity and hope the crash back down to earth could only hit hard.

The Jets, despite playing poorly on offense all game, managed to climb out to a 16-0 lead with 7:01 left in the third quarter thanks to a four-to-nothing turnover difference. Yet it wasn’t enough. The offense continued to struggle; the offensive line couldn’t block anyone, Sam Darnold was just a touch off on passes the entire game, had six passes batted at the line of scrimmage and Adam Gase’s system sure didn’t look any different than Jets systems of the past. The defense played phenomenal, right up until C.J. Mosley left the game with a groin injury then things fell apart like the classic Roots album.

“That was a little disappointing considering our defense was playing really well in the first half,” Gase said. “Those guys brought great juice and created turnovers. We were just inept on offense, making mistakes that we can’t make (if we want) to consistently move the ball. We have a lot to clean up there.”

After the game the players stuck to the ‘next man up’ mantra when asked about the loss of Mosley, and of course injuries are apart of the game and good teams find ways to overcome them, but as soon as Mosley went out the Bills started doing whatever they wanted.

“It didn’t affect us,” Jordan Jenkins said of Mosley’s injury. “We rotate guys in and out in practice. We have the utmost faith in all of those backers and they kept making the same calls. They were making all the checks. It was just a different person back there.”

Yes, it was just a different person back there and that person isn’t as good at football as Mosley. The Jets don’t want to make excuses so they will continue to say Mosley’s absence didn’t contribute to the defense falling apart, but Bills players can be a little more forthcoming.

“(Mosley) is a heck of a player,” Josh Allen said. “He does a lot of things for that defense as far as alignment, setting the tone and being the big-hitter guy. When he went out, it was kind of a game changer. They didn’t have somebody that was vocal in the middle of the field that was able to make their calls and all their checks.”

As soon as Mosley got hurt rookie running back Devin Singletary started breaking off yards in big ol’ chunks, receivers started running wide open, okay receivers were running wide open all game but, Josh Allen started hitting them in stride and the Bills were able to score back-to-back touchdowns in what felt like the blink of an eye to take the lead.

On top of all of that, Kaare Vedvik missed an extra-point and a field goal. Despite the epic collapse those four points would have been enough to give the Jets the win. After the game Gase didn’t come right out and say they will have a new kicker next week, but he came awfully close.

“We’ll see what happens on Monday,” Gase said. “I don’t know. I haven’t had a chance to have a conversation with the personnel guys and see what they want to do. We’ll have more as we go.”

Missed kicks and Mosley’s injury were too much for the Jets to overcome, but make no mistake they lost this game because of their own inept offense and their inability to get anything other than Le’Veon Bell and Jamison Crowder going.

In his first game as a Jet, Le’Veon Bell put his name in the record books. Bell became the fastest player to ever run for over 8,000 yards by hitting that number in his 63rd career game. Eric Dickerson got their in his 64th game. Bell finished the day with 92 total yards (60 rushing and 32 receiving).

Quinnen Williams also suffered an ankle injury and didn’t return to the game. Gase said they will have more information on both Mosley and Williams injuries tomorrow.