JetsInsider.com > News > Blogs > Jets Get Outplayed On Both Sides Of The Ball, Fall 27-13 To Patriots

Jets Get Outplayed On Both Sides Of The Ball, Fall 27-13 To Patriots 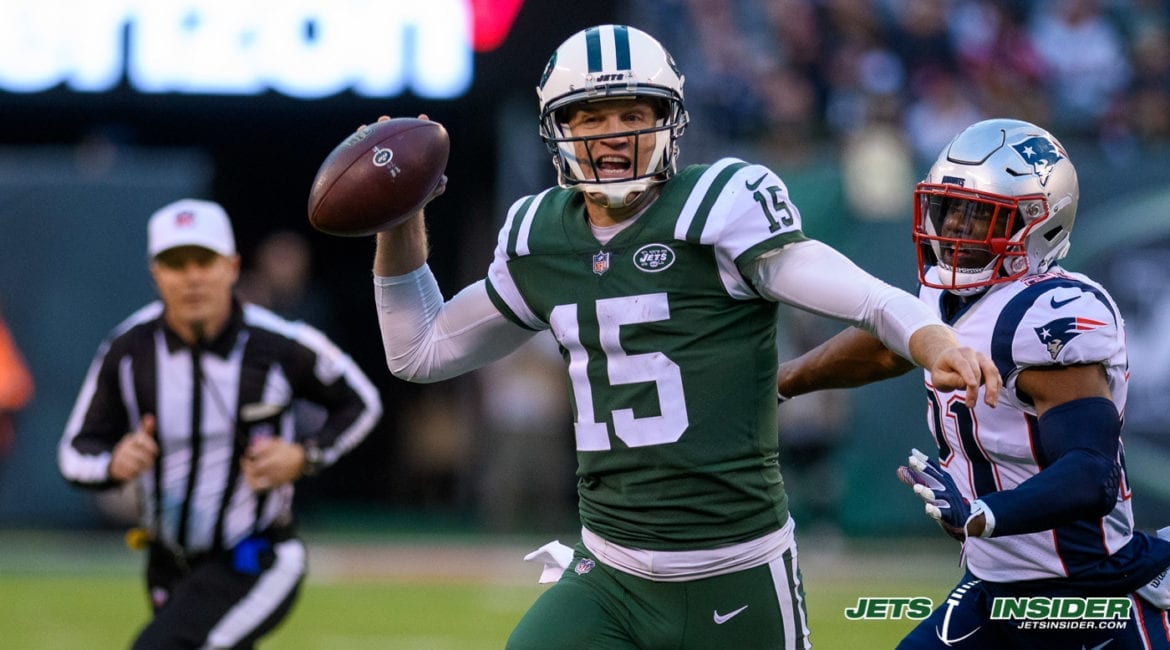 A Jets defense allows nearly 500 yards to Brady and the Patriots, ultimately losing 27-13 and dropping their fifth in a row.

The Jets entered week 11 coming off their bye and a hope for some change following a 41-10 dismantling by Buffalo the week before.

On the Patriots first drive the Jets defense showed a bit of resiliency, something that didn’t last the whole day. Brady’s big 36 yard pass to Julian Edelman would set them up close to field goal territory. The next play Jamal Adams would punish Rob Gronkowski for a big hit, jarring the ball lose and ultimately ending the possession with no score.

Back to offense the Jets would go with the journeyman Josh McCown at the helm. Coming off a lackluster performance against the Bills, McCown started out hot, throwing for 179 yards and a touchdown in the first half. Two 19 yard catches from Isaiah Crowell and Chris Herndon would set the Jets up deep in New England territory. Crowell’s catch was about a yard behind the line, but he was able to shake one defender and pick up a first down.

A huge roughing the passer call on third down would extend the drive, ultimately setting up a 16 yard score to Jermaine Kearse. The drive would total 80 yards in just nine plays, giving the Jets a 7-0 lead.

In very Patriots fashion they responded, very quickly. A 23 yard catch to Josh Gordon followed by a Chris Hogan 20 yard grab would put the Pats right back in Jets territory. On 3rd and 2 the Jets elected to accept the offensive pass interference call on Edelman, pushing them back 10 yards. The next play Brady would lob his first of two touchdowns of the day to Rob Gronkowski for 34 yards, knotting the game up at seven.

Late in the second quarter the Patriots would be on the move again. On back to back plays they opted for a lob play to Gronkowski around the endzone. Both times Jamal Adams would provide solid coverage, forcing the Pats to kick a field goal to go up 10-7. Enough can’t be said about Adams and his performance throughout the season. He finished the day with 10 total tackles, 7 of them solo and three pass deflections.

Before the half the Jets would get the field goal back. This time a 41 yard pitch and catch to Quincy Enunwa would set them up in prime field goal position. Jason Myers deep field goal from 55 would be true, tying the game up at 10 heading into the half.

In the third quarter both teams would trade scores. First, a 61 yard drive resulted in a Stephen Goskowksi 32 yard field goal. The final play of the drive was a loft to Gronkowski in the back of the endzone but to no avail.

The Jets would answer with a field goal to tie the game up at 13 with 4:34 left in the third.

Moments later it would take the Patriots just four plays to go 75 yards for the score. Chunk plays of 27 yards to Hogan, and 21 from James White would be capped off with a 21 yard score by Edelman. All afternoon the Patriots found holes within the zone scheme of the Jets defense. On the touchdown reception, Edelman had about 15 yards of open space to work with before getting touched.

“That’s really bad. At least make them work for it. It was a turning moment for the momentum of the game,” said Leonard Williams about the four play drive.

Midway through the fourth the Patriots would add another score, this time coming from the legs of Sony Michel. Michel bulldozed all afternoon, rushing for 133 yards and a score.

Even on a day in which the Patriots committed 11 penalties, the Jets couldn’t find the grasp of momentum.

On offense the Jets would muster just 338 total yards as apposed to the 498 by the Patriots. The protection for McCown was better than usual, allowing just two sacks on the day. One area that couldn’t get going was the running game, which totalled just 74 yards.

The 13 points marked the fifth straight time they failed to reach 20 points in a game. Coming into the game the Jets were ranked 24th in the league in points per game (20.8)

“We have to be more consistent. Consistent on drives. Converting on third downs, not turning the ball over,” said Jermaine Kearse when asked about the offensive woes.

In total, the Jets failed to record a sack or a turnover. That marks five consecutive games without a takeaway.

If the Jets wanted any chance of winning against Brady they were going to have to generate some sort of pass rush, which did not happen. At times Brady spent what felt like an eternity in the pocket, throwing for 283 yards on 31 attempts.

The loss for the Jets marks the fifth consecutive for them against the Pats dating back to 2015. In addition this makes five losses in a row for this club, putting them at 3-8 for the season.