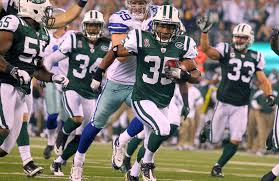 It was a night to remember when the New York Jets took on the Dallas Cowboys back in 2011.

Last week it wasn’t easy to write the look back last week since the New York Jets hadn’t ever beaten them. So, we went with the closest thing, the 1996 team actually leading in the fourth quarter. This week is a little different since the Jets have beaten the Cowboys four times out of 11. For me, the choice was obvious.

It was September 11, 2011. It was the tenth anniversary of that horrible day that nobody wants to talk about. It was opening weekend of the season and Sunday Night Football pitted the New York Jets against Tony Romo and the Dallas Cowboys.

In the first quarter Dez Bryant opened the scoring with a three yard touchdown reception from Tony Romo to give the Cowboys an early lead. A Dan Bailey field goal put the Cowboys up 10-0. However, late in the half, Mark Sanchez connected with Dustin Keller from four yards out to make the halftime score 10-7 in favor of the Cowboys.

Midway through the third quarter, Tony Romo threw his second touchdown pass, this time to Miles Austin from 36 yards out to enlarge the lead to ten once again. A Nick Folk field goal late in the quarter closed the gap to a touchdown as the fourth quarter arrived in East Rutherford, New Jersey.

But the fourth quarter is where the fireworks happened, turning the game into the favor of New York. The game was almost out of reach early in the quarter with a Felix Jones one yard touchdown run, making the game 24-10. But as Rex would say, “Here come the Jets!”.  Three minutes later, a second Sanchez touchdown pass, this time to Plaxico Burress from 26 yards out closed the game to seven points.

On a Cowboys fourth down with just over five minutes to go, the late Joe McKnight came knifing through the middle to block the punt, and Isaiah Trufant picked it up and took it to the house to tie the game at 24. Wait, here the play is now:

What a play by Joe and by Isaiah. The crowd was going crazy. Could the Jets complete the comeback on this anniversary night?

Yes they could. A Nick Folk 50 yard field goal with seconds remaining gave the Jets the 27-24 victory.

Penalties Hurting Jets Chances Of Winning,Are The Jets Playing For Todd Bowles Job,Round One Db Options,New York Jets Kicker Signed Nathan Shepherd Suspended,Whose Ready To Play Like A Jet Rookie Camp Day 1,Extra Weight Wont Slow Down Aaron Maybin,Three And A Half Realistic Options At 6,Ratliff Confident Heading Into Competition,Five Games To Focus On For 2012,For Edwards Its Now Or Never