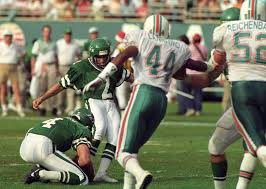 Could the New York Jets make the playoffs on the final day of the 1991 season?

In 1990, it was New York Jets coach Bruce Coslet‘s first year leading the franchise. He took over for Joe Walton and led them to a 6-10 record. Here in 1991 he was trying to take his team to the next level and that means a playoff appearance. It came down to the final week of the year. The Jets entered the final week with a record of 7-8 and were facing these same Miami Dolphins. The Jets controlled their own destiny here. Win and you are in.

The first half was pretty uneventful. The two teams traded touchdowns. Brad Baxter scored with a one yard romp for the Jets in the first quarter, and Dan Marino answered with an 18 yard strike to long time favorite weapon Mark Clayton to tie the score before halftime.

In the third quarter, the Dolphins struck first to take the lead on a Pete Stoyanovich field goal from 23 yards out. However, Baxter’s second one yard touchdown put the Jets back on top by a 14-10 score to end the third quarter.

Each team traded field goals to start the fourth quarter. Stoyanovich went first with Raul Allegre matching later in the quarter. With under a minute to go Marino hit Ferrell Edmunds with a one yard score to put the Dolphins ahead 20-17, seemingly ending the contest. However, Ken O’Brien led the Jets quickly down the field on the ensuing drive, and Raul Allegre tied things up with no time left on the clock, 20-20.

Halfway through the overtime period, Allegre hit from 30 yards out to give the Jets the 23-20 win and the playoff berth.

The following week, the Jets fell to the Houston Oilers in the Buddy Ryan punch game, but for one week, the Jets were a playoff team. It was the first time since 1986.