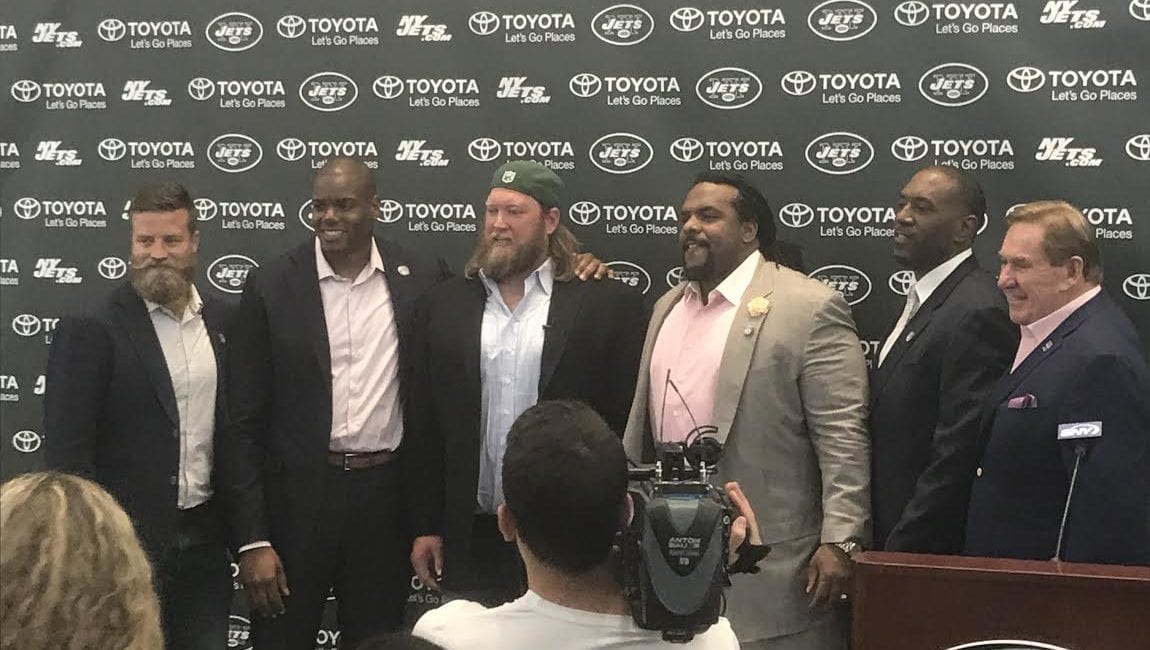 FLORHAM PARK, NJ – Nick Mangold was – by every definition – a throwback player who played his entire 11-year career with only one team and now number 74 will never be worn again by a Jets player. One day the Jets will retire Mangold’s jersey and he will enter the Jets Ring of Honor with his friend and teammate D’Brickashaw Ferguson, the two players were drafted in the same year – and the same round – and spent their entire careers with the Jets, but Ferguson already got his send off. Today was about celebrating the career of Nick Mangold.

Mangold had his family in attendance, extended family as well, Christopher Johnson, Mike Maccagnan and Todd Bowles were there as well as were some former teammates, Ferguson, Brandon Moore, Willie Colon and Ryan Fitzpatrick. There was a highlight clip, Johnson giving a speech talking about how much Mangold meant to him and this franchise, “How lucky am I? How lucky am I? But part of what makes me a lucky man is being here, today, with you,” Johnson said. “Welcome everyone, today we are here to celebrate the career of the all-time great New York Jets, Nick Mangold. As you can see by the people in attendance this man is loved by his family, his teammates and this entire organization, and me.”

Mangold signed his one-day contract and gave a speech himself all with his understandably shy and adorably cute daughter in his arms.

“To me coming in, to the New York area from where I came from in Ohio come to the Long Island – Hofstra – it was different and my wife and I moved to Westbury, to an apartment there right next to the train station,” Mangold said. “So, we’d go into the city and I absolutely fell in love with it. And so, to be able to stay here, play in this city and be a part of it for 11 years has been one of the greatest things I could have ever asked for.”

Mangold said he’s not sure what’s next for him in life, he said it felt weird to be retiring and ending his career at only 34-years-old, so he plans to take some time to think about what’s next for him but for now he’s going to focus on spending time with his family and being a Jet for life.

“There’s so many emotions that go into this, to be back, to be a part of it, to be a Jet for life and to truly want to be here, to be in this area, we’re not going anywhere, Mangold said. “I think my kids really like it here since my son for his birthday wanted to go into the city to a museum and to see a show, so I think we’re stuck here. So, it’s something that I want to be around, I love (the Jets), my kids all love the Jets, my family are all Jets fans so it’s been an absolute honor (and) privilege to be a Jet and I’m glad that I can continue.”

With Woody Johnson still in the U.K. serving as Ambassador Christopher Johnson continued to play the role of owner admirably and he absolutely nailed his speech, giving Mangold the sendoff he deserves.

“I remember when we drafted him, with the 29th overall pick in 2006, we knew he was smart, we knew he was tough and we knew he would give us everything he had on the field,” Johnson said. “What we did not know was how much he would embrace our organization and this community. I have vivid memories of him running out of the tunnel wearing a First Responders hat, carrying the American flag or serving as Santa Claus for a charity event, best Santa Claus ever by the way.

“We’ve had some great Jets since I got here in 2000 and Nick’s accomplishments stack up against with the best of them; he earned seven Pro Bowl selections in an eight-year span – the second most by any player in Jets history – he started in 171 games, he did not miss his first contest until 2011, his time here made us a better organization, he was an outstanding leader who showed our young players through his words and his actions what it is to be a professional. He will be missed on the field but as he said in his retirement announcement, he will be a New York Jets forever.”