No Offense, No Chance 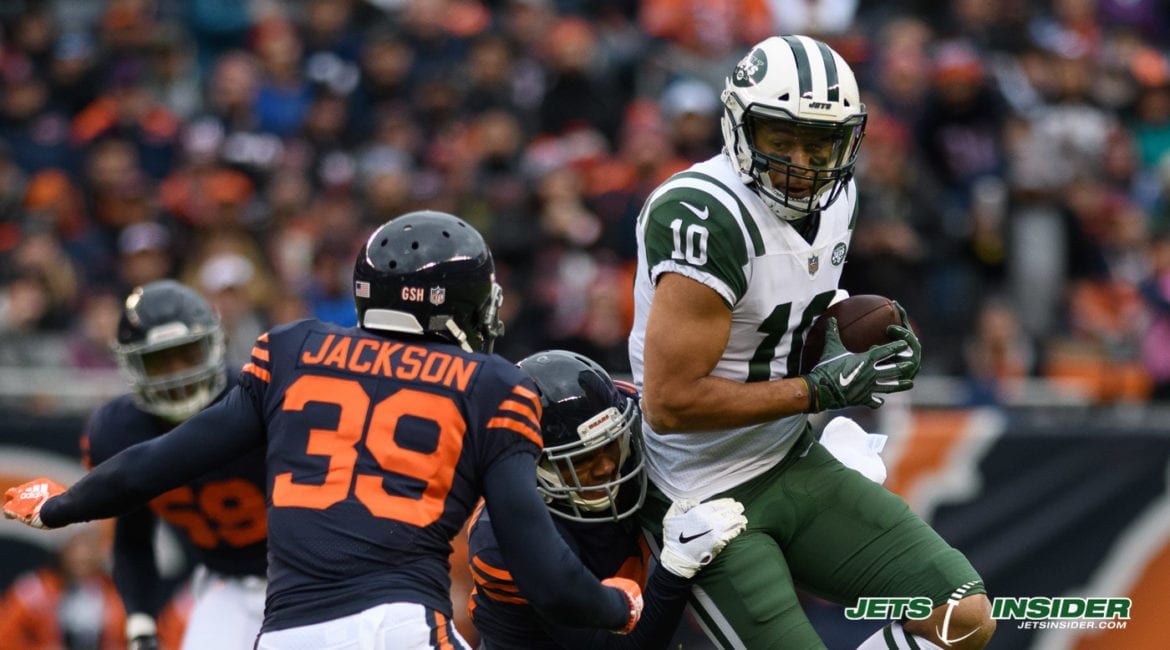 “(That’s) the story of the game… No one’s open. I mean, there’s a safety on the inside there, the tight end is covered underneath. Other side of the field, covered, covered.” – Tony Romo

That quote came after the drive that followed the only Jets touchdown drive of the game, with just under six minutes left in the game and the Jets down 24-10 and forced to punt for the eighth time of the day. Sam Darnold put up the most pedestrian of numbers on the day, completing 14 of 29 passes (48 percent completion percentage) for 153 yards (5.3 yards yards per attempt) and one touchdown, but as underwhelming as those numbers are, Darnold’s pedestrian play was not the story of the game. The story of the game was Darnold had nowhere to go with the ball.

With Robby Anderson and Quincy Enunwa out, Terrelle Pryor released, the Jets were without three of their top four receivers. Jermaine Kearse was the only receiver on the field with any level of success in this league and while he’s a solid third receiver he’s not able to win one-on-one matchups with pure athletic ability as the number one threat on the field. Kearse, Andre Roberts, Deontay Burnett, Charone Peake and Rishard Matthews (who just joined the team this week and can’t possibly know the entire playbook yet) is not a lineup that is going to scare anybody and it certainly didn’t scare the Bears.

Khalil Mack was out so Darnold didn’t have to worry about him coming to hunt him down, but the Bears have a very talented defense especially in the secondary and they did exactly what they were supposed to do when facing a non-threatening receiving core, they shut them down. All game long Darnold would drop back to pass, scan the field only to find no one open. It certainly didn’t help matters that the Jets couldn’t get anything going on the ground either, Darnold was actually the most effective runner on the team. Isaiah Crowell ran for a measly 25 yards on 13 carries (1.9 yards per carry), Trenton Cannon managed a whole 10 yards on six carries (1.7 yards per carry) and Darnold picked up 22 yards on five carries (4.4 yards per carry). If you can’t run the ball and you don’t have any receivers that can get open, you really don’t have a chance in this league.

Without even the threat of Robby Anderson being able to beat defenses over the top the Bears didn’t even have to worry about defending against the deep ball, making the already tiny windows Darnold had to work with even tinier. Then to make matters somehow even worse, Neal Sterling left the game after getting hit in the head taking away another receiving option. Chris Herndon caught a touchdown pass, but it was his only catch of the day.

The Jets defense had a pretty decent game, but as this now cliche story goes when the offense struggles the Jets defense is bound to have breakdowns on two or three drives and that’s all it takes to lose the game. Obviously the 7o yard touchdown pass to Tarik Cohen was the big one, Avery Williamson took the blame on that telling reporters after the game, “That one was on me. I had to hug him up and I didn’t. Mental error.” And once again the issue of penalties reared it’s ugly head as the Jets had seven pre-snap penalties which is simply inexcusable and naturally those penalties came at the most inoppurtune times often killing their own drives before they start and extending their opponents drives when they should already be stopped.

The odds were already stacked against the Jets before the game even started, the unforced errors continued to stack the odds even more in the Bears favor and the Jets lost a game they had no chance to win. This way far too tall a task to expect a 21-year-old rookie quarterback to overcome but again this season isn’t about racking up wins and avoiding losses, it’s about developing Darnold and having him take his lumps and learn from them now with the hope that it will better prepare him for the future when the front office can finally surround him with some talent.

“This is where when you’re young you’re just running the plays that are called and you’re just trying to find people (open), but as you get older you start to kind of learn some of the subtleties and coverages, and what’s easier and what’s not,” Romo said. “Is my O-line protecting me? Is it not? And it’s just hard, it’s going to be hard for them all year.”

Jets Day 3 Picks Te Cb Dl Rb Plus Trade For De,Darnolds Recent Progression Creates Glowing Promise For Future,Learning To Fly,What Would Should Jets Do If They Got First Overall Draft Pick,Jets Lose To Bengals 17 6 Offensive Line All Around Awful,Good New Bad News,Jets Release Sione Pouha,Jets Release Spencer Long,Jets Vs Giants The Battle For The Big Apple,Oops They Did It Again