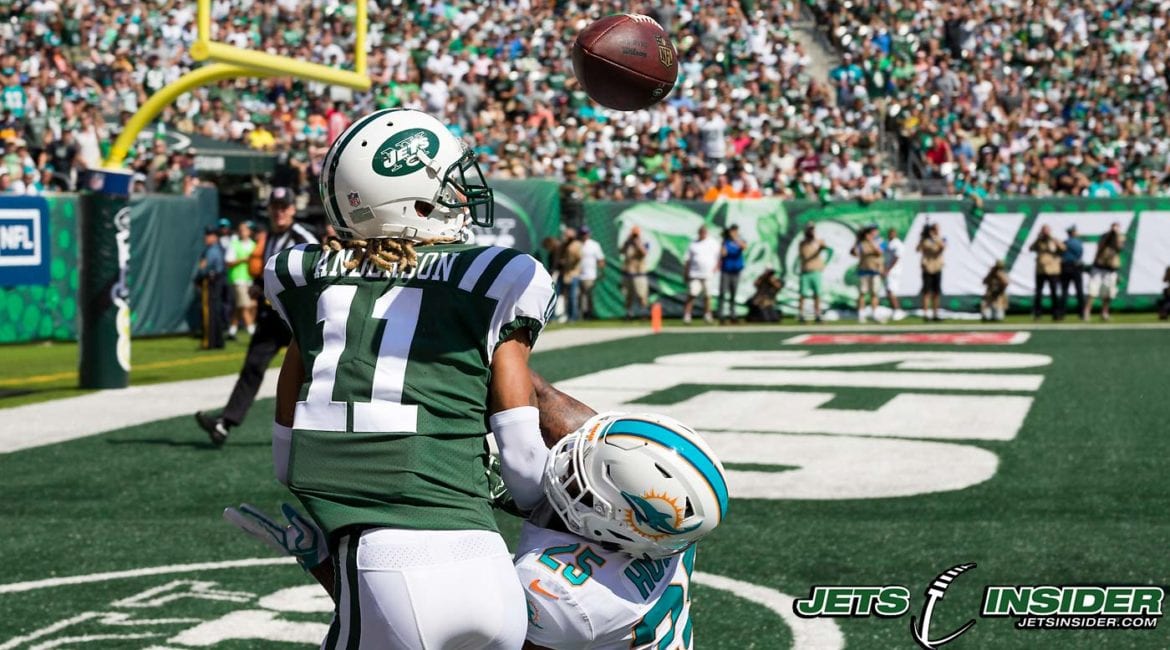 After having held Jay Ajayi in check again and actually getting pressure on the quarterback the Jets found themselves up 14 points, then they immediately started to unravel. After having such a successful day offensively the Jets got conservative, of course the false start penalties didn’t help there, and Matt Moore wisely decided to pick on Buster Skrine. Skrine was flagged multiple times and beaten for both Kenny Stills touchdowns that allowed the Dolphins to tie the game.

Ajayi was held to 51 yards on 23 carries, Muhammad Wilkerson had his best game since before breaking his leg, Darron Lee was making plays, Marcus Maye got his second interception on the season and Jordan Jenkins knocked Jay Cutler out of the game. Everything was going right for the Jets, then it all fell apart.

After Mayo’s interception the Jets drove down the field and scored a touchdown on a Josh McCown pass to Austin Seferian-Jenkins, McCown’s third passing touchdown and fourth overall touchdown on the day. The Jets defensive stopped the Dolphins on the next drive, then the Jets started to beat themselves. Their next drive started with a false start, run for no gain, screen for a loss of four then a draw play on third-and-long. Moore quickly found Stills for a deep touchdown pass against Skrine to cut the Jets lead to seven. The next drive went; incomplete (McCown threw to Robby Anderson in double coverage even though Seferian-Jenkins was wide open in the flat), another false start, swing pass to Forte for five yards followed by a horrible sack for a 10 yard loss.

A couple more holding calls go against Skrine before Stills beats Skrine again for another touchdown to tie the game. The Jets take over and actually pick up a first down on a 12 yard run from Matt Forte, but then run the ball again for one yard then three yards before McCown ate another sack on third down. The Jets defense was able to finally get a stop, giving the Jets offense the ball back at their own 15-yard-line with 47 seconds left looking like we’re all about to watch the game go to overtime.

The Jets had three timeouts left so they made the right decision to see if they could sneak down the field enough to steal a field goal and avoid overtime but the play call and throw they chose to go with on first down was an absolute disaster. With the Dolphins in zone coverage and McCown unable to step into the throw, McCown short-armed a pass to Jermaine Kearse on the sideline but Kearse was bracketed by two Dolphins. Even if McCown could have stepped into that throw he still wouldn’t of had the arm strength to throw all the way across the field let alone splitting defenders as he did so. But McCown decided to try anyway, lofting the pass to Dolphins cornerback, Bobby McCain, as McCain had to stand there and wait for the ball to float to him, game over.

The Jets had this game won, they started the game aggressively on offense but once they got the two touchdown lead they let off the gas. The penalties surely didn’t help, but the coaching staff needs to shoulder the brunt of the blame for this loss. Well the coaching staff and Buster Skrine. The entire defense was playing lights out, but Moore focused on Skrine and that one decision was enough for the Dolphins to mount a comeback. Skrine was flagged for holding multiple times and allowed seven completions on only seven targets for a total of 116 yards and three touchdowns.

No one player ever loses a game for a team by himself, so McCown and the coaching staff chipped in, but yesterday was as close as you’ll see to one player losing a game by himself and Todd Bowles is going to have to come up with a backup plan for Skrine so he can’t do it again.

Jets Defense Gears Up For Week One,Game Review Where It All Went So Wrong,Jets Defense Must Come Up Big In Battle With Panthers,What Would Should Jets Do If They Got First Overall Draft Pick,Jets 1 2 0 At Jaguars 2 1 0,Rex Says Ground And Pound Still His Preference,Preview Jets 3 3 Vs Patriots 5 1,Defense Must Focus On Stopping Jones Drew,Journeyman Mccown Happy With Jets Chemistry,Jets Pro Bowlers Respond To Selections